INSIDE THE CONCLAVE: Illegal eyewitness report of the conclave that elected Pope Francis. That someone is breaking an oath to tell this story is disconcerting,  but the way the voting went seems reassuring. Here is another analysis article from 2013 showing Cardinal Scola was a narrow leader on the first ballot. He was a known Italian who was committed to reform of the Curia and was orthodox in his theology. Some of Pope Francis supporters were definitely anti-Scola. The Brazilian Cardinal Odilo Scherer was the third world favorite of the most corrupt of the western cardinals. He went nowhere.  We can expect in the future that some "third world candidates" will carry water for western gender ideology cardinals in the way America's first "black President" was the one who actually engineered the white feminist cultural revolution in American domestic political life. Let it be known and proclaimed loud and clear - Jose Bergoglio was not such a figure in 2013 and certainly isn't now. The cardinals who liked Francis because he wanted a decentralized synodal Church has a very different reason than Bergoglio for wanting synodality.

THE POPE AND HIS SIX MAJOR INITIATIVES: 1) Replace homosexual clericalism in the priesthood with the public fraternity of synodality. 2) Open the global Church to the Asian civilizations especially China. 3) Develop a monotheistic dialogue with Islam. 4) Develop a Christian brotherhood with the Orthodox. 5) Defend the developing South from the greed of bankers and the slavery of debt with a program of God, land, and labor. 6) Defend the developing religious South from the ideological colonization of gender ideology.

II. PRESIDENT TRUMP AND THE NATION

RUSSIAGATE - A BRIGHT SHINING LIE: Pat Buchanan.  The same people who decided Hillary Clinton couldn't be guilty as Secretary of State in compromising security through her email system and policy through her Foundation did try to make a case that President Trump was compromised as a commander in chief because of his pre election relations with the Russians. Top FBI officials, CIA  and National Security officials played their roles. Interestingly, they were not orchestrated by Madame President. Not at all. The prime directive was "Trump must be defeated." That drove the intertwined deep states of Britain and America much more than the hapless Democratic Party of Podesta and Clinton. The Five Eyes alliance had one more mission--bring down the Orange Scotchman from America. This investigation/campaign has prevented President Trump from keeping a fundamental promises of his campaign--to develop much more amiable relations with Russia. He was clearly advocating a paradigm shift  in developing a much more coherent post Cold War American foreign policy. The very large and influential  security apparatus of the Anglo West (or Atlantic Alliance) does not want a  redrawing of American alliances in terms of agreements with strong regional actors. The roles of China, Russia,  Brazil, India and Turkey would all increase in this nationalist strategy while the EU, Britain and the "White Dominions" would become less important.  The UN would drop WWII victors Britain and France as Security members and consider bigger countries like Brazil and India or more dominant regional actors like Germany, Japan, and Iran. The really historic dimensions of a Trump led nationalist foreign policy are obscured by his Saudi/Israeli fueled animus toward Iran. It is great that nationalist Trump is securing Israel's capital AND BORDERS(Golan Heights). It is terrible that we are aiding the Israel-Saudi alliance in destabilizing the nation of  Syria and pushing regime change for the nation of Iran. One of the great paradoxes of the leftist obsession with Russian collusion is that stronger relations with Russia would temper the anti Iranian thrust of our present policy. The Iranian triangulation against the Saudi Sunni Salafists was the singular achievement of the Obama presidency in foreign policy. It was his Nixon going to China moment and it was thwarted by partisans as bad as the anti-Trumpers.  The anti male leader resistance movement trying to undermine President Trump is confusing our political discourse and poisoning our public life. Hatred has consequences and our country is paying.

SEATTLE IS DYING: The breakdown of civic order - a local documentary.


KAZAKHSTAN FOUNDING FATHER TO RESIGN: Nursultan Nazarbayev has been the leader of this dominant Central Asian country since its 1991 independence from the Soviet Union. 18 million people; 70% are Muslim; 25% Orthodox. 65% are ethnic Kazakh speakers; 20% Russian and 10% Ukraine. The largest landlocked country in the world at 100 million square miles (Russia is 6 million sq. miles. China, Canada and US 3.5 million sq. miles.). Good hydrocarbon industry. GDP 10,000/yr. He has been a force for stability and is an admirer of Lee Kuan Yew.

ISOLATED QATAR IS MORE IN TOUCH THAN THE SAUDI ROYAL FAMILY: Qatar cuts support to Hamas.

TRASHING QATAR: The Mideast Forum wants to defend the Saudi-Israeli alliance and does a very good job of showing the influences of Qatar in the US think tank world. Their video Blood Money
American politicians are a venal lot and real countries are able to manipulate our public discussion. Foreign lobbyists have real foreign policy objectives while far too many American politicians are motivated by career advancement and winning the next election. Britain, Israel, and Saudi Arabia play this game better than Qatar, but Qatar plays it pretty well. Russia, China, and Iran are way behind in the influence game. They are not punching their weight and thus the American view of the gravitational centers of geography, military strength and population is disastrously skewed. The big regional nations should be in close diplomatic contact with the US. Instead their smaller regional foes   manipulate US foreign policy by manipulating our increasingly geographically and culturally illiterate governing class of careerists.

IS ALGERIA LIKE EGYPT AS CHANGE OF LEADERSHIP SEEMS INEVITABLE?
One stable institution is the military.

MEXICAN PRESIDENT ASKS POPE AND SPAIN TO APOLOGIZE: Pat Buchanan isn't buying it. Buchanan is too quick to confuse Spain and the Catholic Church with white people and the West. He should know the Anglo-American West was never keen on brown skinned Mediterraneans as true Anglos nor the Catholic Religion as an heir of the Enlightenment.

THE RETURN OF THE STRONGMEN
This is the tile of a long article in the Washington Post by Robert Kagan advocating a militaristic foreign policy defending democracy and human rights. This depiction of the values of the Western Enlightenment   against "authoritarians' is a very old leftist(now globalist) argument against religion and nation. Who can forget Theodore Adorno's Structure of the Authoritarian Personality   .  Kagan doesn't like the new nation men any more than his wife Vicki Nuland does(but that's a separate anti Trump John McCain story).  Nations will be led by strong men as long as  history is directed  by a Father God. It is no wonder that another atheist who tells us foreign policy is an anarchic struggle for survival among perpetually hostile countries is having so much trouble with an American nationalist for President and religious nationalists governing the world's most important countries. 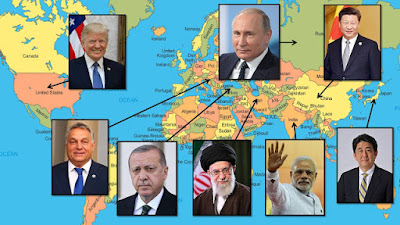 EVERY MOVEMENT STARTS AS A CAUSE, BECOMES A BUSINESS, AND ENDS UP A RACKET (ERIC HOFFER): Jussie Smollet ended up doing volunteer work at Chicago's PUSH office. That is Jessie Jackson's old shakedown front. All charges were dropped and findings sealed for Smollet's $10,000 bond forfeited. The mayor and the police chief were eloquent angry protectors in denouncing the injustice. Even Jackson's PUSH is saying they were used.  Smollet remains the grand huckster of the gay/racist hoax. Here's a view from Chicago reporter John Kass who knows the players. Our outrage should not blind us to the actors and decisions made in this travesty.
Posted by anthropology of accord at 6:00 AM