Dawson's choice of the truest son of St. Thomas Aquinas

Biographer Bradley Birzer says that Christopher Dawson -- the great Yorkshire Catholic and historian who died in 1970 -- had an Augustinian mind and reveled in the saint's emphasis of the moral imagination. But this certainly did not constrain him from having a deep love for Aquinas:

"According to Dawson, St. Thomas completed the work of St. Augustine, the other Latin church fathers, and the neo-Platonists on grace by sanctifying Aristotelian thought as well as incorporating Eastern Orthodox notions of Christification and the sacraments as means for deification."

"By combining Eastern Orthodox thought with Augustinian thought, Dawson contended, Thomas dramatically changed the western notion of grace... 'It is not merely a power that moves the will but a light that illuminates the mind and transfigures the whole spirit.' It was this new East-West synthesis that the Protestant Reformers fought in the sixteenth century..."

Dawson, while revering the master, had nothing but contempt for the post-Thomas Scholastics. By turning Thomism into a rigid system which rendered "the imagination impotent," the opponents of Scholasticism responded with their own rigidity... and the Reformation was off to the races.

Dawson counseled students to temper their instruction in Thomism with some doses of the less brilliant St. Bonaventure [both he and Thomas died in 1274] -- but a man who emphasized the creative workings and imagination of the Holy Spirit.

The man, though, whom Dawson believed to be the most sublime heir of Thomism was the poet whom his Anglican father taught him to love: Dante.

Dante (who was 9 years old when Aquinas died) was the link between medieval and Renaissance cultures. 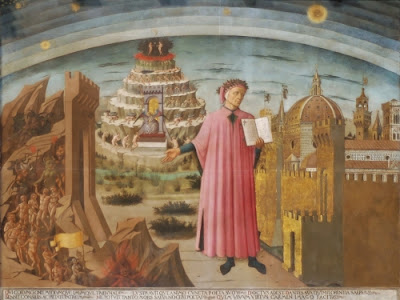 "For Dante, an objective reality existed. 'There is no subjectivism or idealism in his world,' Dawson claimed; 'everything has its profound ontological basis in an objective spiritual order.' Unfortunately, Dawson lamented, no one of Dante's caliber followed him... This was unfortunate, Dawson wrote; 'otherwise we might have been saved alike from the narrow rationalism of eighteenth-century Classicism and from the emotional debauches of nineteenth-century Romanticism.'"

Posted by Farmer at 6:22 PM No comments:

There are many bishops sympathetic to pacifism and feminism. What would you tell them if you had a chance -- to read some Solzhenitsyn?

Our all-male priesthood is the world’s oldest fraternal hierarchy—and yet the failures of the abuse scandal and the continued corruption in the exercise of authority are hardly fruits of too much masculinity.

Feminist and pacifist movements always grow best in soil guarded by the Christian sword. These caricatures of peace and justice helped shape much of the post-Vatican II social and moral teaching in the seminaries of the North. Add to these ideologies the insinuation of fawning and cliquish homosexual personality types in the corporate body of the seminary. This communal cast composed a formless plastic depression rather than an iron mold which would shape priestly character for several decades.

This environment spared no one.

Even "orthodox” priests have adapted a kind of diluted Christian language of virtual pacifism, spoken in an apologetic and subjunctive mood. These frames of mind and mood are carried by the personality structure of domestic friendliness where once strode the public manly fraternity of the Twelve.
Posted by Farmer at 6:27 PM No comments:

Question put to Pence about how to view the Church

You argue that it's time for a neo-orthodox understanding of "infallibility" -- the progressives having done their best to toss the notion out the window, while traditionalists seem convinced that each papal press release should come with its own reliquary.

Let us be obedient sons of the Church. The gospel is the first truth which the Church declares infallibly to us. The Bible is not alone in its guaranteed inerrancy. So many of the words and prayers of the liturgy and the sacramental order are similarly without error, that is, infallible.

Reciting the Nicene Creed is a time when the whole congregation declares truths infallibly. We share in those assertions made infallibly certain by their historical role in the shared prayer life of the Church. The best way for laymen to join the priesthood at the mass is to offer oneself to the Lord in the canon. The best way for the congregation to join in the authority of the hierarchy is to say the prayers properly and infallibly as they are written.

In an age so uncertain, to men so skeptical, isn’t it exactly these authoritative statements which we must emphasize in an ever more convincing and communal manner? Let us re-present Infallibility at the service of both the basic kerygma and the efficacious words of the sacraments.

It impoverishes this guaranteed ecclesial authority to limit infallibility as a “deciding vote by the Pope on a controversial issue.” It can be that, but it is so much more—and it is exercised so much more often about truths not controversial among us but inflammatory to the world.
Posted by Farmer at 6:33 PM No comments: