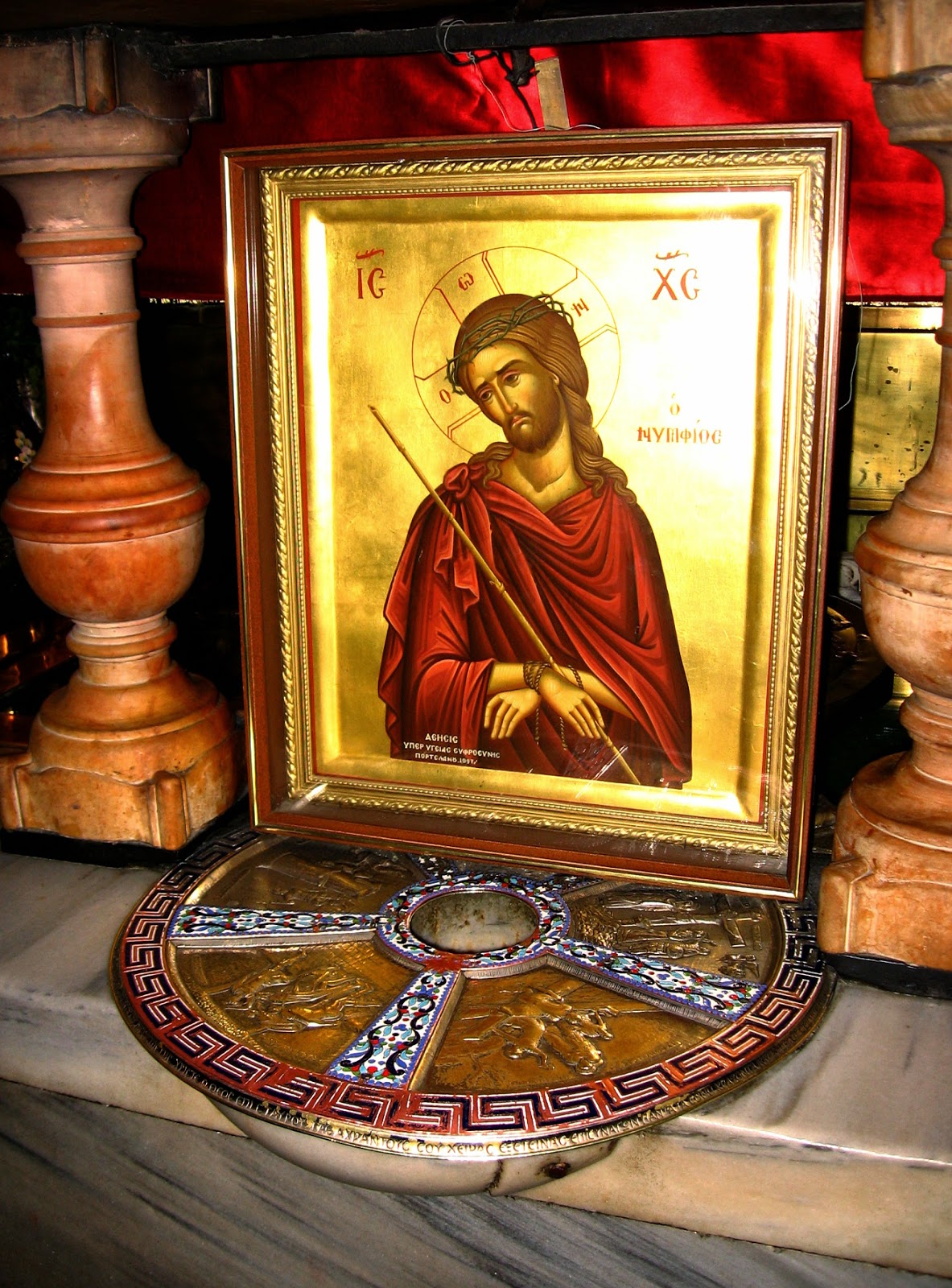 
Holy Week is when everything slows down, and truth presses its claims: will I keep settling for a superficial embrace of our Lord, or am I ready to submit to the schooling of the Holy Spirit -- the only One who can teach us how to become "partakers of the divine nature"?


Easter can be either a false kiss or true Communion.
Posted by Farmer at 12:30 AM No comments:

by A. Joseph Lynch
R&G NEWS ROUND UP

POPE FRANCIS IN IRAQ: Pope Francis concluded a historic trip to Iraq during which he travelled to Najaf and met with the Grand Ayatollah Sistani. Sistani, effectively the religious leader of the world's Shia Muslims, lives modestly in Najaf, home to the mosque-tomb of Ali. For more on all this, we highly recommend this talk from Ahlulbayt TV, a Shia-run YouTube channel.

TIM GORDON ON VATICAN II: We have long suspected that the ultra-traditionalism of Timothy Gordon pushed Taylor Marshall in the ultra-traditionalist direction through their "TnT" programs. The two, however, had a falling out and Mr. Gordon appears to be coming around to support Vatican II while Marshall rejects even the liturgical reforms of Pope Pius XII before the council.

CANDADIAN PASTOR JAILED: Pastor James Coates is behind bars as he awaits an early May trial over his decision to hold religious worship services that violated pandemic restrictions in Canada.

CHRISTIAN STUDENT WINS: The US Supreme Court sided with a Christian student in a case involving his religious liberty on a college campus. In a 8-1 ruling, only Chief Justice John Roberts dissented. That might shock many, but sadly comes as little surprise to AoA.

DEFUNDING RINOS: President Trump is calling on his supporters to defund organizations that support RINOs (Republicans In Name Only) and instead fund his PAC. This comes after his recent demand that organizations like the RNC cease using his name and likeness to raise money. As Trump plans to remain in the Republican Party we will watch and see how effective his campaigns against the GOP establishment are ahead of the 2022 elections. So far we've seen more establishment Senate candidates drop out, the most recent of which is Missouri's Roy Blunt. Meanwhile Kentucky is pressing forward with plans to ensure McConnell's successor - if or when McConnell resigns - will be selected from a list of three establishment Republicans.

DIRECTOR ON CANCEL CULTURE: James Gunn, who was nearly "cancelled" for inappropriate photos and jokes, is now defending cancel culture. "Stop calling everything 'cancel culture'... People can be offended by something, or think something sucks, and that's not 'cancel culture' - it's free speech." Sadly he fails to understand that "cancelling" citizens over their political views is exactly the opposite of free speech. Such acts are the social equivalents of the "disappearings" that were done to dissidents in Argentina. Not only are they opposed to free speech, but they have a chilling effect on the free speech of others.

PRIESTS SUPPORT HOMOSEXUALITY: A group of priests from the Diocese of Lexington (Kentucky) have put their names to a letter of support for homosexual youth. The letter contained blanket support with no call to chastity. The diocese says the signature list is "living" and will be updated as more priests sign on. The group of signatories includes James Sichko, who travels nationwide leading parish missions. We would suggest parishes reconsider his retreats.

VACCINES AND ABORTION: We recently posted a link to a YouTube interview with Pamela Acker on the gruesome connection between fetal cell lines harvested via abortion (or infanticide) and the coronavirus vaccines. That interview was subsequently banned on YouTube but you can find it here on LifeSite's webpage. Although the discussed fetal cell lines were not used in the Pfizer or Modern vaccines, they are present enough in the Johnson & Johnson vaccine to fall under grave moral criticism from Catholic bishops.

Posted by Andrew Lynch at 7:00 AM No comments:

by A. Joseph Lynch
I. POPE FRANCIS AND THE CATHOLIC CHURCH
WUERL'S RICHES: Reports that Donald Wuerl, the scandal-plagued former Archbishop of Washington D.C., received over over $2 million in 2020 shook the faithful this week. Taylor Marshall breaks down the most recent Wuerl scandal and notes that the $2 million was only the most recent payment. It appears the former archbishop needs nearly than $200,000 each month for some time to come.
GOD'S PRONOUNS: Jimmy Martin is at it again. This time using female pronouns in speaking of God. In another recent video, Taylor Marshall defends the use of masculine pronouns against the three most common augments for female pronouns. Marshall also thought of a good debate point regarding "preferred" pronouns. Since liberals believe we should address people by their "preferred" pronouns (even if they don't match biological sex), we should do the same with God - who uses exclusively masculine pronouns for Himself in His written Word. Where Marshall is weakest is in his belief that man and woman are in God's image solely by their spiritual faculties. Yet this would reduce male and female to a kind of neutered angelism. This weakness of Dr. Marshall is addressed in the newest short video from Religion, Sex, and Politics - and we suggest you watch it.
OPEN COMMUNION: The German Church is one of the most corrupt places in the Catholic Church. Bishops live lavish lives and involved in questionable financial dealings as Catholic citizens are taxed by the state to fund the corrupt episcopate. In a new scandal the head of the German bishops conference announced he would give the Eucharist to any Protestant that presents himself for Communion. No longer a sign of unity already established, this bishop - who refuses to wear clerics it seems - has no respect for the corporate character of the sacrament, much less its sacrality.
II. US AND THE NATIONS ROUND UP
TRUMP AT CPAC: President Trump gave a rousing speech at CPAC last weekend. Frankly it was good to see him and hear him speak. The speech, in which he said he will not be starting a new political party and hinted at a 2024 presidential run, was a sign that the president is still the leader of the Republican Party even if the RINO establishment continues to attack him. While we await to hear more plans from Trump, we hope he focuses on primarying the GOP establishment in 2022 while using his fortune to open media opportunities for conservatives under assault from cancel culture.
BIDEN LOSING POWER: Democrats have made two striking moves to limit Joe Biden's military authority. First, they are now asking Biden to have the approval of the Vice President and House Speaker - Harris and Pelosi - prior to any decision regarding the use of nuclear weapons. The second act they seek is to end the presidential war powers in place since after 9/11. It's clear that Biden lacks the mental acuity to act as president and we await more from Democrats seeking to undercut his power and the powers of the presidency.
NONSENSE IN D.C.: The Democrats have taken their response to the Capitol riot of January 6 to ever more absurd levels. As they threatened President Trump with impeachment if he called in the National Guard over endless riots last summer, one small rabble in the Capitol was all it took to militarize the city. The troops were supposed to be gone after Inauguration Day, but there's reason to believe that they will never leave. After the FBI warned of a possible attack this week, the city requested the troops remain an additional sixty days. Meanwhile this week, the FBI Director Wray refused to release the cause of death for officer Brian Sicknick - who Wray knows died of natural causes and not from being assaulted during the Capitol riot. Of course, Wray was happy to accuse the rioters of "domestic terrorism." It's clear that current FBI leadership are pursuing anything but truth and justice.
SANCTIONS, NO SANCTIONS: Biden's foreign policy continues to be incoherent. After announcing the Saudi crown prince's involvement in Khashoggi's murder, he refused to sanction bin Salmon or the Saudi regime. Meanwhile he's launched new sanctions on Christian Russia. In this moves Biden reveals he has no interest in building a relationship with a fellow Christian nation while at the same time seeking to remain cozy with a murderous nation that exports radical Wahhabi extremism. Once again, the lack of religion in the State Department and the White House prove harmful to American foreign policy.
III. CULTURE OF LIFE, CULTURE OF PROTECTION
COVID INCOHERENCE: As Twitter launches a five-strike program to ban users for spreading "misinformation" about the coronavirus vaccines, the Biden government has shown us how serious it is taking the virus by releasing into the US population 108 illegal immigrants who tested positive for the coronavirus.
DR. SEUSS CANCELLED: The cultural cancellation of Dr. Seuss is yet the latest sign that the radical Left is out to tear down every last scrap of America's heritage. The Left is seeking a Revolution in order to create a new America, and to do this requires the forced destruction of America's past. "Cancel Culture" is means by which the Left claims the moral high ground while leveling anything that binds American's to their history, customs, and traditions. Sadly Dr. Seuss will not be the last American classic to be cancelled.
PARLER V. AMAZON: In the latest battle against "big tech" the app Parler has withdrawn its federal lawsuit against Amazon and refiled in state court. More from Viva Frei.
Posted by Andrew Lynch at 6:00 AM No comments: