What is the main duty that God assigned Saint Joseph?

Here is how the new bishop of Rome – Papa Francesco – answered: “He is to be the 'custos,' the protector.”

Speaking at his installation Mass, the pope said that before we can protect others, we must guard Christ in our lives.

That’s what Joseph did, and continues to do… as protector of his son’s Mystical Body, the Church. 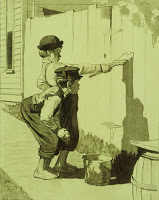 From The Adventures of Tom Sawyer:


"So Tom unwound the thread from one of his needles, and each boy pricked the ball of his thumb and squeezed out a drop of blood. In time, after many squeezes, Tom managed to sign his initials, using the ball of his little finger for a pen. Then he showed Huckleberry how to make an H and an F, and the oath was complete..."

Take a look at Pence’s essay that appeared this morning in the Minneapolis ‘Star Tribune’ newspaper – all about blood oaths, the priesthood, and the communal nature of masculine love.
Posted by Farmer at 11:00 AM No comments:

May our new Holy Father be like a “pioggia di primavera”


The diocese of Rome and the rest of the Church need a good Spring Rain!

There are other high clerics – besides the Scotch cardinal who was forced to concede he was a sexual predator – whose wicked deeds should be exposed.

Let us Catholics turn our backs on the craziness of the 1960s, when permissiveness became the cultural lodestar, and rediscover the order and beauty that Saint Thomas Aquinas understood better than anyone:


“When it is well-ordered, intense passion is a mark of intense virtue.” 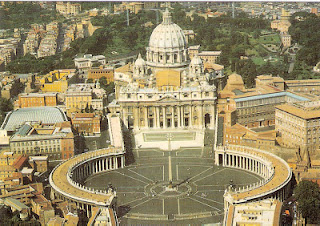 "The Church is the tree of God that lives for ever and bears within her eternity and the true inheritance: eternal life."  (Benedict XVI)
Posted by Farmer at 6:42 AM No comments:


As the eighth century dawned, the powerful Muslim armies continued to advance northward on Europe.  In 732, however, at the Battle of Tours (southwest of Paris) they were finally stopped – by Charles “the Hammer” Martel.

[This was exactly a century after the death of Muhammad].

The Franks were greatly outnumbered by the invaders on horseback, but Martel had chosen the terrain of engagement.

With this stunning victory, Martel – grandfather of Charlemagne – laid the foundation for the European Middle Ages.

In 1683 – more than nine hundred miles to the East at Vienna – the Ottomans were defeated by the Christian forces commanded by the Polish king, Jan Sobieski.

(The Polish, German, and Austrian armies were fewer than the Turkish soldiers led by the Grand Vizier.)

Sobieski said that his purpose was “to proceed to the Holy War, and with God’s help to give back the old freedom to besieged Vienna, and thereby help wavering Christendom.”


On September 11th, Christian forces arrived on a small hill overlooking Vienna known as Kahlenberg and drove off an Ottoman observation force. They then lit up three large torches to let the Ottomans and the defenders know of their arrival…

In the early morning dawn of the next day the Catholic troops held Mass while the Protestants held their own service, both prayed for victory…

[At the end of the day with the Turks on the run] Sobieski was the first to reach the Grand Vizier’s tent from which he received the delirious and joyful cheers of his army and the defenders of Vienna as the savior of Europe. The city was saved.

As the allied troops plundered the camps, Jan III took the time to dictate a letter to the Pope by which he would report his victory to the whole of Europe. In this letter he made his famous paraphrase of Julius Caesar’s dispatch from the battle of Zela in 47 BC:

Posted by Farmer at 6:27 AM No comments:

Email ThisBlogThis!Share to TwitterShare to FacebookShare to Pinterest
Labels: The State of the Nations
Newer Posts Older Posts Home
Subscribe to: Posts (Atom)