Consequences of America shunning the sacred

Check out Dr. Pence’s essay in the Minneapolis ‘Star Tribune’ newspaper – and some of the wild comments of its progressive readers.

Seraphim the wonder-worker, pray that Russia will lead the way back to holiness

Saint Seraphim, who died in 1833, was one of the greatest ‘starets’ (holy elder in a Russian monastery).  Even a fearsome bear was calmed enough by his sanctity to receive food from his hand. 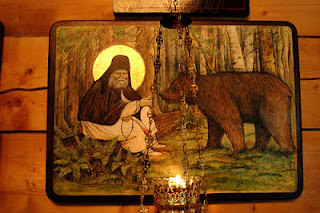 Here is a quote of St. Seraphim’s:

"When despondency seizes us, let us not give in to it. Rather, fortified and protected by the light of faith, let us with great courage say to the spirit of evil: ‘What are you to us, you who are cut off from God, a fugitive for Heaven, and a slave of evil? You dare not do anything to us: Christ, the Son of God, has dominion over us and over all. Leave us, you thing of bane. We are made steadfast by the uprightness of His Cross. Serpent, we trample on your head.’ "

Austin Ruse – consistently the best commentator on the United Nations – has an essay on the current Russian government’s efforts to withstand the secular nuttiness of that organization and of the Western elites.

And the historian Philip Jenkins puts the recent controversy over the female punkers at Moscow’s Cathedral of Christ the Saviour into better perspective.
Posted by Farmer at 6:40 AM No comments:

Praying the Liturgy of the Hours

The Holy Sacrifice of the Mass – together with the Divine Office (centered around the Psalms) – constitute the official daily prayers of the Church.
One of the simplest ways to pray them is to go to the impressive Universalis website.
Posted by Farmer at 4:41 AM No comments: 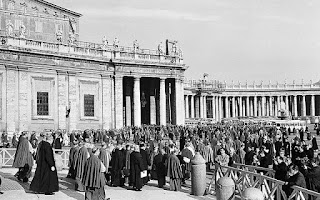 It was fifty years ago, today, that Pope John XXIII opened the Second Vatican Ecumenical Council at St. Peter’s shrine in Vatican City.

Sent forth from the Upper Room in Jerusalem and the Cross over Adam’s grave at Golgotha 2000 years ago, these men now incarnated the Eucharist across the face of the earth. Their intention was not to emphasize a particular doctrine or refute a specific error; but, rather, to present the truth of Christ, the Church, and the whole Divine Drama as an explanatory whole. They would proclaim, in the language of biblical personalism, the whole of the Divine message entrusted to the Church.  For in Christ and the Church, they held the keys to unlock the mysteries of nature, history, and the person. They called themselves “successors of the apostles gathered in single-hearted prayer with Mary, the mother of Jesus, forming one apostolic body headed by the successor of Peter.”

Five days after the Council opened, the October Cuban missile crisis pitted the US and the USSR at the brink of nuclear war. Four days later the Fathers of the Council wrote their first collective statement. Like Peter surrounded by the apostles in the streets of Jerusalem on that first Pentecost, with a single voice they corporately addressed “all men and nations.”  They proclaimed the good news that God had become man to draw humanity back into communion with Him.

The fathers presented themselves as a kind of sacrament: “This very conciliar congress of ours, so impressive in the diversity of races, nations and languages it represents, does it not bear witness to a community of brotherly love, and shine as a visible sign of it? We are giving witness that all men are brothers, whatever their race or nation.”

How fortunate that Vatican I in 1870 was interrupted by the Franco-Prussian War causing withdrawal of French protection, the victory of Italian nationalists, and the loss of the Papal States. The Church, shorn of temporal rule, emerged from that violent era more self-conscious of Her true identity as the mystery of the Church, the People of God, a holy nation amidst the nations. This sacral public body of men, ruling no particular State, could now fulfill her mission and baptize all the nations. The brotherly love of men under God and Law is the public bond upon which Christ built His Church. The same kind of bond has formed the nations since circumcision marked the Old Covenant. The Church has a lesson for the world about the religious and sexual ordering of true Love.  After the century in which She proclaimed the spotless feminine purity of Mary in her Immaculate Conception and glorious Assumption, the Apostolic Church demonstrated the public form of hierarchical masculine communion needed to protect sacred goods.

The ringing bell of a village church beckons the believers, but can be heard by all the community.  Fifty years after Vatican II may the Light of that fraternal ecclesial event renew our Church and give sight to the nations, and all those of Adam’s sons who will open their eyes and see. 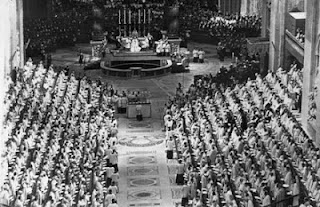 UPDATE: Here is an article summing up the recent statements of Pope Benedict on the anniversary of the Council.  His essay of personal memories (which was published in L’Osservatore Romano) is superb!

Flannery on the murky mist

"If you live today you breathe in nihilism. In or out of the Church, it’s the gas you breathe… I think that the Church is the only thing that is going to make the terrible world we are coming to endurable… If you believe in the divinity of Christ, you have to cherish the world at the same time that you struggle to endure it… It is easy to see that the moral sense has been bred out of certain sections of the population, like the wings have been bred off certain chickens to produce more white meat on them. This is a generation of wingless chickens, which I suppose is what Nietzsche meant when he said God was dead."

(Flannery O’Connor)
Posted by Farmer at 5:52 PM No comments:

The modern mind: there is NO reality beyond the material!

"May the angels lead you into paradise;
may the martyrs come to welcome you
and take you to the holy city,
the new and eternal Jerusalem."
(Rite for Christian Burial)

On this feast day of our Guardian Angels, check out this essay by Michael Baruzzini.
Posted by Farmer at 7:23 PM No comments: