The Ordered Loves and Protective Customs of a Christian Nation

This essay by Pence is the first of two parts:

To “fight for the homes of our wives and children, the graves of our fathers and the temples of our gods”—so the poets described the patriotism of the ancients.

Francis Fukuyama, in The Origins of Political Order, credited religious rites honoring the tombs of ancestors as the communal acts which bound men in the wider loyalties and group identity of territorial allegiance. Authoritative states emerged only when men moved beyond family, friends, and immediate blood ties to the wider-scale loyalties of religion, sacral duties, and large territorial claims. This new hierarchical order subordinated the blood ties of kin to deeper claims binding the communal lives of men to the highest spiritual realities of nature and the cosmos.

G.K. Chesterton put it this way: “Morality did not begin by one man saying to another, ’I will not hit you if you do not hit me’; there is no trace of such a transaction. There is a trace of both men having said, 'We must not hit each other in the holy place.' They gained their morality by guarding their religion. They did not cultivate courage. They fought for the shrine, and found they had become courageous."

The blood shed by men defending the nation and territory was a sacred seal which ordained the blood of kinship to the higher bond of countrymen. The honor code of the living and the souls of the dead were thus bound in remembrance rites and maturation rituals shaping the masculine communal identification needed for a man to risk his life for the group.

Nations are a necessary natural form of protective masculine agreement in a world of beasts, pestilence, and earthquakes. Existence is dangerous and brutish, and yet nations are not formed by calculations of self-interest. Nations are adult masculine communal acts of defending the sacred—the graves of ancestors whose souls are not dead, the tombs of soldiers, the churches where we worship God, and the homes of our wives and children. What defines a nation is what goods it holds sacred; and with what vigor and effect it can defend such goods. 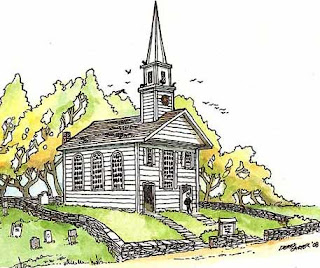 Protestant churches, Baptist meeting houses, and Evangelical storefronts fill America’s cities, towns, and countrysides. It was in such churches that America’s civic bonds were first forged in the Biblical commands of preachers passing on Christ’s command: “Love God and love your neighbor."

The men who were shaped into a common brotherhood by the Biblical preaching on Sunday went out to re-make their towns and counties into a righteous political order that would give glory to God. These were men of the outdoors. They knew that the bountiful land of mountains and streams featured in landscape art, sung about in patriotic hymns, and predicted by age-old psalms was a gift from God. Gifts call forth thanksgiving, praise, and obligation. This posture of giving thanks and praise for the gifts of Life and Land was the soil that nourished civic characters willing to sacrifice for God and country. When they protested to the King they were jealous of their rights, but when they built together a city on the hill they were mindful of their duties.

Since the original designation of the Samaritan as a neighbor, the public bond of Christian love has never excluded obligations to extra-territorial and extra-ecclesial humanity. This breadth of Christian love did not compromise its depth. Christian love of neighbor was the fertile soil in which a patriotic brotherhood from sea to shining sea was made incarnate among fellow citizens in local, state, and national communities. When Christ told the story of the good Samaritan and linked the feeding of the hungry, the clothing of the naked, and the watering of the thirsty to salvation, he did not abrogate the bond of the nation or the deeper bonds of the Church. He died for all because he was the new Adam. He picked twelve apostles because He was the Messiah of Israel. He became flesh in the Virgin Mary and incorporated the baptized into His Body because he was the Son of God.

The great enlightenment which Christ brought to mankind was to order our loves in a deeper and wider matrix. His love draws men into the deepest bond of the Body of Christ, the intimate bond of male female marriage, the civic bonds of fellow countrymen, and the universal bond as sons of Adam.

Public-ordered love in America was expressed by a common shouldering of military obligation, obedience to the law, acceptance of established territorial identities, and proper manners. These civic loves and duties have been passed down and deepened over several centuries—they are not chosen by us but received from our forefathers. Similar bonds with different traditions, martyrs, and remembered battles bind Christian men of other nations.

Christian men are also tied by a common duty to fight the one being we are allowed to hate -- the Old Deceiver -- the murderer from the beginning, the perennial enemy of the sacred. He is our common enemy, and when he rears his head at home or abroad those of us bound in defending the sacred are also obligated to wield a sword against the Evil One. In the division of roles between Church and State, the messy tasks and sharpened swords of war and capital punishment are now held exclusively by the nations.

Protestants rejected the established male form of the Catholic clergy, and yet they accepted the form of masculine sacrificial love as the basis of male citizenship and local church governance. It is no accident that a nation under God, built on a religious code and strong local authority, would be born in the Protestant milieu of the American East Coast. What a blessed fruit of the Protestant Rebellion is the American nation!

Muslims, the sons of Ishmael, never relegated religious duties to the pinched familial concerns of women and children. They are as ready as any culture to forge the bonds of nation and live under a rule which allows them communal expression without a confessional state. The Muslim difficulty in distinguishing caliphate from nations under God has been in the Mideast where secular nationalists divorced the “palace of the Arabs” from their religious identity. The confusion of a nebulous pan-Arab identity, the Islamic religion, and the unsettled borders of Lebanon, Syria, Jordan and Israel are not problems inherent to Islam and need not be imported to America. There is a similar confusion among Europeans today who trade their particular and substantial national and religious identities for the more formless spatio-temporal abstraction -- "the Modern West." Mideast Arabs and today's western world are soon to give way to the more natural and robust public identities of religion and nation. American Christians will find much more commonality with devout Muslim Americans than with atheist Canadians and Europeans enlisting us to save the “modern West” from religious traditionalists.

Mormons play a peculiar role in this drama. Like Muslims, they have a different Christology than Catholics and mainline Protestants. But like Catholics (and unlike Protestants and Muslims) they accepted Christ’s structured order of a male priesthood. The Mormons instituted Aaronic and Melchizedekian forms with stunning communal success in maintaining masculine religious identity. The Mormons are a peculiarly American form of responding to the Christic event. A Protestant nation with two million men in prison might learn a good deal from the male socialization lessons of the Mormon sacral form. It has shaped Mormon men as serious permanent participants in a national brotherhood committed to defending the sacred.
Posted by Farmer at 12:59 PM