The Thin-Chested Orthodox, the Predators who play them, and the abiding Pretenders

[There are obviously many good-hearted men among the 450 active and retired bishops in this country.  By turning a blind eye, however, to the deep layers of corruption among their priestly sons, the Catholic patriarchs – even those with vibrantly orthodox reputations – have managed to stir up comparisons to the sordid mess that Martin Luther railed against in the 16th century.

Here is Doctor Pence’s analysis of the Kansas City scandal.]

There was a liberality of weeping & gnashing of teeth in 2006 when Robert Finn was installed as Bishop of the Diocese of Kansas City, Missouri – the "progressive" home of the National Catholic Reporter.  Bishop Finn did not concede the interpretation of Vatican II to others.  He was not shy in exercising his office. A summary article of his first months was titled "Extreme Makeover."

Thus, when he was charged for failing in his duty as a mandatory reporter of child abuse there was suspicion amidst the favored media of “orthodox” Catholics that a faithful and courageous bishop was being maligned.

The Graves report (an independent review commissioned by Bishop Finn)
and the stipulated facts of his bench trial refute such an argument. The facts and testimony are chilling. Bishop Finn had at hand that rare priestly predator: a true pedophile who desired to photograph and gaze upon very young females (some in diapers).

The Bishop’s knowledge of this central truth is irrefutable by physical evidence, and the testimony of multiple female church employees.  Bishop Finn’s chief defense argument was actually a contention that he was not the designated mandated reporter for the diocese. He should have pleaded guilty and accepted some form of personal punishment, thus shielding the diocese and his office from state meddling in church governance.  A man’s failure in his office is no argument against the authority of that office. But to be orthodox in belief does not guarantee the heart of a sacrificial warrior. Bishop Finn showed no such heart facing the pornographer/pedophile Father Ratigan. He showed no such manly honor when he faced the prosecuting attorneys of Clay and Jackson counties. To avoid charges in Clay County, the Bishop agreed to an unprecedented intrusion of civil authorities in church governance.

To satisfy neighboring Jackson County where he was found guilty, he promised to supplement the failure of his fatherhood with an office of ombudsman. If it takes this many guards for the guardian, then the shepherd’s crosier belongs in a stronger hand.

Robert Finn’s guilt is his own, and yet it is true that he was set up – the Bishop was betrayed. The overt lies, convenient losses of memory, and final calling of the police as the noose tightened around his own neck are all part of the perverse tale of the Vicar General, Monsignor Robert Murphy.

In May of 2011, Monsignor Murphy finally called Kansas City police to reveal evidence which he had flagrantly hid from the same police officer six months previously. Was it really conscience which led to his phone call and a successful negotiation for personal immunity?  The Bishop was out of town so he could look like a whistle-blower. But the Chancellor of the Diocese, Bradley Offutt (now Vicar General), had written a recent letter to Bishop Finn pushing for new action. Priests at the Vincentian Mission House where Ratigan was staying, as well as the deacon of Ratigan’s old parish, were pressing for new action in light of the perverted priest’s continued contact with children. The obscene facts are all in the stipulations and the Graves report.  The depth and causes of Murphy’s deceit are not. 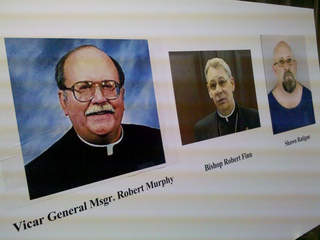 Monsignor Murphy has a long history of appearing to be something he isn’t. He was Bishop Finn’s choice to be his first Vicar General; and he is now credited by the Jackson County Attorney as indispensable to the prosecution of accomplished pedophile Ratigan, and failed mandated-reporter Finn. Monsignor Murphy returns to a beautiful little church to be pastor. The Catholic priesthood is rid of a pedophile, thanks to civil law and the prosecutorial spirit of officers who knew how to exercise the police powers of governance.  The fractured priestly fraternity, however, retains two personalities still locked in a deadly dance: the orthodox bishop who cannot punish his sons and the treacherous careerist who betrayed female colleagues, defenseless children, trembling deacons, and finally his beguiled bishop.

The Catholic media should not defend the indefensible inaction of Bishop Finn. They would better press for his confession of personal guilt (not sorrow), the self-imposed penance of resignation, and a true conversion of his soul to strengthen him for future duties in the Church.  Some inquisitive reporters and practiced pens might then explore the deeper causes of the twisted practices of his Judas and ours: Monsignor Robert Murphy.

UPDATE:  There are not that many straight-shooters covering the continuing scandals in the Church, but two of the best are Phil Lawler and Rod Dreher.
Posted by Farmer at 11:43 AM