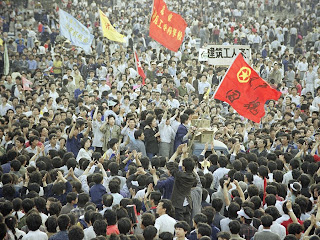 The photo is from the Tiananmen Square protests of 1989.  An excerpt from a recent magazine essay on today’s China:


All of which should leave the regime feeling secure in its own position. Yet it hardly acts that way. "They're acutely aware of the risk," reports one diplomat, describing how closely Beijing watched the Arab spring, seeking to learn from the ousted despots' mistakes. One immediate response was to prevent the possibility of large crowds, flooding popular areas with security personnel to disperse potential groups, even ordering street-sweeping vehicles to drive closer to the pavement in order to keep people moving. There may be some freedom of speech in today's China, but there's next to no freedom of association.


The passage called to mind Tocqueville’s stress in Democracy in America on the importance of associations.

The historian Leo Damrosch on the Frenchman’s visit to Philadelphia:


“It happened that a free-trade convention, opposed to the protective tariff that was highly controversial at the time, was about to meet in Philadelphia, while the tariff’s supporters… would be meeting simultaneously in New York.  Neither assembly would have had the slightest chance of happening in France.  Tocqueville was impressed that the First Amendment to the Constitution expressly guaranteed ‘the right of the people peaceably to assemble, and to petition the government for a redress of grievances.’  It is not easy today to appreciate how radical that right once was.  French law prohibited any assembly of more than twenty people unless they had obtained official permission, and Tocqueville lamented, ‘What can public opinion itself do when twenty people may not assemble in one place, and when there is no man, family, group, class, or free association that can declare its views and act upon them?’ ”