Africans and Anglicans: A Catholic Anthropology for the Priesthood


[Editor's note: It is a good time to look back at this relevant article in the wake of the Vatican discussion of family life. We will soon write specifically about the synod, and the pregnant lessons of African taboos.]

Archbishop Rowan Williams will end his ten-year term as Archbishop of Canterbury in December 2012. He is the primate of the Church of England, and holds a special place of honor among the other primates of the 44 autonomous national and provincial churches in the 80-million-member Anglican Communion.

His final General Synod of the Church of England will be held in November; and Williams has published a letter strongly advocating a resolution to allow female bishops.  He wrote:


"A Church that ordains women as priests but not as bishops is stuck with a real anomaly, one which introduces an un-clarity into what we are saying about baptism and about the absorption of the Church in the priestly self-giving of Jesus Christ.  Wanting to move beyond this anomaly is not a sign of giving in to secular egalitarianism – though we must be honest and admit that without secular feminism we might never have seen the urgency of this or the inconsistency of our previous position.”

Thanks be to secular feminism, indeed! While the first Anglican female bishops came from overwhelmingly white churches (USA, Australia, Canada, and New Zealand), the Anglican provinces who have resisted any female ordination (deacon, priest, or bishop) are from the growing churches of the global South: Central Africa, Melanesia, Nigeria, Papua New Guinea, South East Asia, Tanzania. (The Anglican church of South Africa is an exception.) The Church of England has not yet joined the other white churches because a compromise to accommodate traditional parishes was deemed too hurtful to the feminists, and thus they ended up voting against the last resolution allowing female bishops.

A general rule in Anglican and Protestant churches has been that a failure to defend the masculine communal nature of the ordained priesthood has been followed by an incoherence in defending the heterosexual character of marriage. American Episcopalians led the way in this peculiar form of progress. It is not really a surprise that one of the new female bishops is an open lesbian. 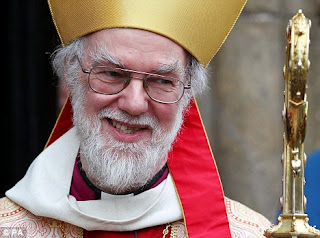 Archbishop Rowan Williams wants to finish his term without the glaring contradiction of accepting female priests and deacons while denying women access to the episcopacy. Most Asian and African Anglicans agree this shows a deep ontological inconsistency. They, too, choose not to split out sacred offices of the deacon-priest-bishop hierarchy as bargaining chips in the battle of the sexes. Williams finishes on a note of consistency in a full capitulation to the heresy of his day; while the more Biblical primates fight to build their churches on a more stable form.

Catholics have not helped our African brothers enough in facing down this last most sinister form of white racism and cultural poisoning. We have not vigorously provided an anthropological and biblical defense of hierarchical masculine communal forms.

Adam and his sons never completed their ruling role on earth – which was part of the original mission of Adam.  They never properly joined one another in a patriarchal fraternity to contest and exorcise the dominion of the Evil One.  Fallen and broken man had to wait until the second Adam showed the filiation of an obedient Son, and instituted the public apostolic fraternity shaped by that love. While the Catholic priesthood under the episcopal hierarchy has not always been the best sacrament of manly public love, it is that Christic priestly love which still shapes its essential character after all these years.

Five centuries ago, Anglicans broke from that sacramental fraternity but maintained much of its form. Now they watch the communal fraternal form dissipate, and can mount neither an apostolic nor anthropological defense.  After years of discussing the “theology of the body,” Catholics need to contribute a theology of the corporate body which explains the ordained masculine philia of Christian brotherhood. This is about the sacred manner in which men love one another unto sacrificial death. It is the unpolluted love that ties Christ to the most newly ordained of His priests today. It is the ordered public love that built our church and inspired our nations. It is the socio-biological fact that explains the territorial and communal masculine affiliations – which distinguish humans from lower animals.

Our Christian brothers in Africa are unafraid in staring down the bizarre new theologies of the imperial white Anglicans.  (Contrast this with American Catholic men who stutter at explaining to twelve-year-old girls why they don’t belong on the altar). The African men are unafraid because a more troublesome enemy is at their doorstep. They rub shoulders with an armed male presence. They have smelled the wreckage of a bombed church on Sunday morning. If African men seem impatient with the “justice claims” of mitered feminists, it may be the unsheathed swords they see outside the bedroom windows of their wives and children that turn them rude.

Is it not time that Catholic men in ecclesial apologetics and civic military policy lend them a hand? We are entering a war and we are not assembled as organized publics in the proper liturgical and military order to protect our women, our children, and our Holy Mother the Church.  The African Anglicans are warning us. Let us see them clearly as our brothers in their fight against the urbane and sophisticated Rowan Williams, making his last bow to the feminist mistress of the modern age.  The archbishop may look like our uncle and sound vaguely harmless in an English sort of way. But he speaks for the great delusion of our age: the comfortably familiar, but perversely sinister, program of the white sexual revolutionaries.  Let us serve the more sacral brotherhood.