Uganda Martyrs, pray for us 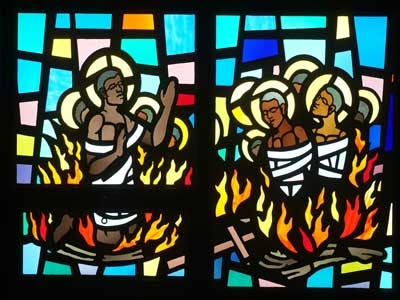 Uganda is an independent (1962) African nation with 38 million people (84% Christian). Parliament recently passed an anti-homosexuality bill roundly condemned by activists in the northern white churches. Denmark, the Netherlands, America, and the World Bank have all threatened Ugandans with severe economic repercussions for their law.

The motto of their flag is "For God and my Country." A formative event in their history is celebrated today to commemorate the martyrdom of Charles Lwanga and his companions. From 1885-1887, King Mwanga II of Buganda was responsible for the execution of a group of young Christian males who had been employed as court pages. They would not submit to his depraved desires. The king knew, in fact, that if a boy was taught the Christian faith and converted, that was one service he would no longer offer the sovereign. Both Anglicans and Catholics were martyred.  Almost 80 countries have laws against sodomy which was a felony  in all 50 U.S. states before 1962. The Ugandan celebration of these recently canonized saints reminds us that Christ has offered all men a share in the deepest and widest of all brotherhoods. All Christian men from the Asian islands to the African heartland know that we are forming a protective brotherhood of cities and nations in imitation of Christ's bond with his Apostles.  Violence, racism, and war can break this bond; and so we must seriously and constantly pursue high and holy brotherhoods to form a public life which glorifies Christ.

Just as incest pollutes the love of sons for their  fathers and brothers for their brothers, the brave young pages of Mwanga's court knew what he was asking of them was no insignificant call to duty. The 27 young men who were marched over twenty miles -- and then burned to death -- leave a bright light for our own so-darkened times.

Saint Charles Lwanga, pray that Americans may display the courage of sexual purity that you and your companions showed this day 130 years ago.

"These African martyrs herald the dawn of a new age. If only the mind of man might be directed not toward persecutions and religious conflicts but toward a rebirth of Christianity and civilization."