Friday BookReview: "In Defense of Purity" By Dietrich von Hildebrand 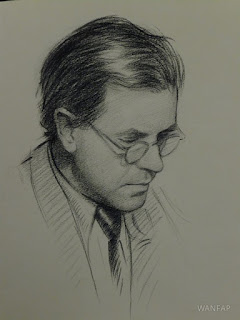 This book is an English translation of a study that grew out of a series of lectures given in Germany in 1925 to the Federation of Catholic Student Unions by Dietrich von Hildebrand (1897-1977). He was a German philosopher and theologian influenced by Husserl and Max Scheler, and a favorite of Popes John Paul II and Benedict XVI.  His study is not about “what is allowed.” It is not a defense against detractors. It is a study of the complete virtue of purity, and that “something completely new” which springs from the heart of consecrated virginity. This is neither an apologetic or ethical argument; it is a painting of the Sleeping Beauty who abides in Christian culture and will awake if we call her again by name. 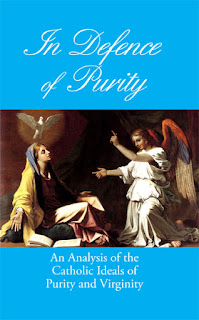 Book One is called 'Purity' and is divided into three parts: 1) how sex is different than the other body appetites; 2) impurity, insensuality and purity; and 3) purity in marriage.

Book Two is called 'Virginity' and is divided into two parts: 1) the nature of consecration; and 2) nuptial relationship of all souls to Christ and the particular marriage of the consecrated virgin.

"It is impossible to understand the virtue of human purity without first considering briefly the distinctive character and unique position of sex in human nature."

Compared to the other bodily appetites, the desires for food, drink and sleep, the sexual desires are essentially deep. Body and soul meet in unique fashion so that sexuality and spirituality are complementary mysteries expressed in the peculiar intimacy of sex. The propagation of offspring, wedded love, and the sacramental character of the marriage act (proles, fides, sacramentum) are the three purposes of marriage which belong to man as an animal, as a human, and as a Christian. Von Hildebrand stresses what was under-stressed in his era: the conjugal unitive nature of wedded love. He also contrasts how terrible the sin when "man flings himself away, surrenders his secret, delivers himself over to the flesh, desecrates and violates the secret of another, severs himself in a mysterious fashion from God. Mysterious as the hallowed mystery whereby in marriage two become one flesh, is the abyss of sin to which the abuse of sex leads." Tenderness, mystery, union, intimacy are experienced inside wedded love while the "honeyed poison of lust has a fascination, alluring and intoxicating but which excludes anything beyond."

"Human Purity involves a distinctive attitude to the important domain of sex." Impurity is both a desecration and degradation. It is a submersion in physical flesh more grievous than gluttony, for it involves a surrender of the spirit from a more central and deeper level. There is, as well, "an impurity that makes its appearance apart from the abuse of sex." The Freudians "rightly call repression" this man who finds a certain sexual satisfaction in trying to make an impression, their sensibility, their carriage, the rhythm of their life which they consider particularly pure and speak of sex with disgust. They are particularly prudish and turn with disgust from anything in which the existence of sex finds open and unambiguous expression... Such men are "in bondage, their spirit is opaque as they have never uprooted their attraction to sex in its negative aspects as bemusing charm of diabolical lust."

There is another kind of man – the sexually insensible. He has an even greater "unspirituality" in his attitude. Too lazy and sluggish to be sexually responsive, too sleepy to possess the alertness  which susceptibility to the peculiar quality of sex demands. This attitude is no more pure or spiritual than a man forced to be poor is an exemplar of "an interior life independent of possessions."
Such men today -- often modern technocrats and bureaucrats -- are dismissive of too much emphasis on sex: "What is the big deal—my gay friends are just like the straight couples I know." Such insensibility is the opposite of purity.

"The pure man perceives the mystery of sex." He perceives its depths, its seriousness, its profound significance. He shrinks from contact which is isolated from love and thus poisonous. "Reverence is a fundamental component of purity." The pure man understands that sex belongs in a special manner to God, and only with his express permission may we eat from the fruit of this tree.  The language of sex and purity is high and reverential or debased and desacralized. To speak of it clinically is to prepare much for its debasement than its sacralization.

The specific value of purity is that it is a particular path which attaches to the inner unity and beauty and splendor of God. "It is the surrender to this splendor which formally constitutes purity." Blessed are the pure of heart for they shall see God.  It is not just that God has sanctified sex but that purity in our approach to sex allows an access, even understanding, about God which is not given to the impure or insensible.

Von Hildebrand distinguishes chastity from purity. "Chastity  is exclusively tied to sex. We speak of the 'girdle of chastity' and the symbol expresses its character perfectly." Chastity is the fortress which secludes and guards. Purity is "an unsullied whiteness, the lily, the unclouded light." There is something of purity which is only possible in a Christian morality because its highest expression is a clarity of vision into the sanctuary of the Trinity. This begins with a reverential encounter with holiness which comes from seeing the radiance of Christ’s countenance. This is the privileged locus of the pure.

Book Two is on virginity -- the nature of consecration (in part one), and why the virgin is the bride of Christ (part two). "The essential nature and incomparable magnificence of Christian virginity can be rendered intelligible by love alone, and specifically by the highest among all created loves -- love of Jesus -- in whom dwells the entire fullness of the Godhead." In the natural order, woman represents, in contrast to man, the receptive principle. In relation to God, however, this characteristic of receptivity is not confined to the female sex. Here where Infinite and finite being, Creator and creature, God and man meet, the man as an individual soul is as purely receptive as the woman… This is preeminently true in the supernatural order of the soul as the bride of Christ – the God man." Hildebrand spoke of “metaphysical femininity” and insisted that masculinity and femininity could not be confined to the biological.

Asceticism calls upon us to renounce the enjoyment of lawful goods. “The renunciation closes and keeps closed the outlet for certain fundamental instincts and keeps dominion over pride and concupiscence.” These are the two attitudes which most cause man to spiral downward from his lofty calling. They appear in many 'alloys' as a consequence of original sin. But more than ascetics, virginity produces an undivided oneness -- it is not simply "renunciation of earthly lust but the renunciation of that community of love and life which marriage represents." Giving this up must not lead to what Pope Francis called the shriveled spinster. It must instead lead to the bounty of love radiating from the joyful spouse. Virginity is the external form of life and the outward sign that all things are forsaken for the sake of Jesus. "The virgin's heart must be far more generous in its love than even the heart of the married; it must be inebriated by that supernatural love which destroys all selfishness and must contain super-eminently all genuine love and surrender to creatures." We now know why consecrated virginity represents the most exalted state on earth; because it is the objective embodiment of love’s supreme mystery -- a marriage in the strictest sense to Christ. The state of the greatest purity is the state of the greatest love.


The virgins, like the martyrs, anticipate heaven, and take the kingdom of heaven by force: even on earth they can say; “Behold what I longed for I already see; what I hoped for, I already possess. I am espoused to Him who the angels serve, at whose beauty sun and moon stand in amaze.”


This little book is a great tribute to the special access which purity affords love. It gives us a language to approach the mystery of sexuality as a portal to the Divine. It is a tribute to the embodied role of the consecrated virgin in Catholic life, and a celebration of how her veiled presence is a dramatic sign to the whole world. It is an embarrassing indictment of those women who have hardened their hearts inside of religious orders and traded their high calling for the thin porridge of life as an all-female NGO.

A single word of disagreement. The author states: "There is no essential difference between the purity of man and the purity of woman -- for the same interior attitude before God is demanded in both cases. It is the same with virginity." It is surely true that all our souls are feminine and receptive before the Holy Spirit. However, a man purer and braver than I should argue in a friendly addendum that the embodiment of purity in males is the purity of David’s soldiers who were allowed to eat the temple bread on their way to war, and the purity of the 144,000 who “know not women” and will fight the final battle in the Book of Revelation. Purity allows men to understand their consecrated masculinity as a public formation under the King. It represents not the intimate nuptial love of the consecrated virgin as much as the communal imitative love of brothers. The eschatological visions of consecrated purity in males and females are different. The virgin lets us see more clearly a reflection of the final wedding feast. The consecrated monks and priests are a living sign of the gathering hosts for the final battle before that feast.

Let us be thankful for the clarifying insight of Dr. Hildebrand’s pure heart, and let us pray with the psalmist:

"A pure heart create for me, O God;


Put a steadfast Spirit within me."

UPDATE: His widow, a college professor of many years, is interviewed about her husband's conversion by Marcus Grodi.


A truly fascinating essay (and interview) by Patricia Snow on how churchmen downplayed celibacy after Vatican II.