Recently I read some comments of Nicolay Karamzin, an early 19th-century poet and historian -- which gave me a much clearer understanding of Russia's first emperor. For most of us growing up in the West, we reflexively cheer Peter the Great as the man who dragged his benighted nation into the rosy dawn of modernity.

Here is the excerpt from a Catholic World Report essay:

Following writers such as Fyodor Dostoevsky and N.M. Karamzin, [Solzhenitsyn] tends to interpret modern history as a struggle between those who would preserve Russia’s spiritual integrity and those who would impose Western culture upon the motherland. It is no coincidence that the most frenzied and destructive characters in Dostoevsky’s 'Crime and Punishment,' 'Brothers Karamazov,' and 'Demons' are those most intoxicated with trendy European ideas. Nor is it a coincidence that in his 'Memoir On Ancient and Modern Russia' Karamzin, fervent monarchist though he was, ventured to make a negative evaluation of the celebrated Peter the Great. “We became citizens of the world,” said Karamzin regarding Peter’s campaign to Westernize his empire, “but ceased in certain respects to be the citizens of Russia.” To Karamzin the Europhile sovereign’s heavy-handed attempt “to transform Russia into Holland” reflected more zeal than prudence.

Solzhenitsyn went further and openly detested the reformist tsar, for he doubted that Peter had really appreciated anything about Western culture aside from its most superficial trappings: wealth, glamor, gunpowder. The Petrine program had caused Russian elites to abandon their roots, and had even set the stage for Bolshevism. How could those incapable of relating to their own people hope to understand those of faraway lands?

Robert Massie won the 1981 Pulitzer Prize for his biography of the emperor. Here are some portions of a reader's review:


When Peter came to power in 1689 (at the age of 17), Russia was a huge but sparsely populated, backward and landlocked country. The capital was Moscow, an interior city of wooden buildings and many churches. The army was not well-trained or equipped, and there were no naval forces to speak of. To the extent Russia had territorial ambitions, they were basically directed in a southerly direction to lands controlled by the Ottoman Empire.

So what did Peter do in the next 36 years? He launched a remarkable campaign to import ideas, technology and experts from the leading countries of Europe (especially the Netherlands and England where he personally resided for a period of time along with other Russians sent on a “great embassy” to Western Europe). And these assets were used to modernize the army, build a navy (not world class, but still formidable) from scratch, and found a new national capital (St. Petersburg) in a marshy area near the Baltic Sea (seized by force of arms) where Peter spent most of his time when he was not off fighting wars. As a result of these accomplishments, the status, capabilities, and historic course of Russia were altered in a fundamental way.

Peter didn’t have a wise mentor while he was growing up, nor a world-class education (basically he was allowed to study things that interested him). He was blessed with enormous energy and at the unusual height of 6 feet 7 inches tall, he cut a commanding figure. He was intensely curious about how things worked, and had an atypical belief (in the Russian culture) that people should start at the bottom and work their way up instead of assuming roles based on their social status. This even held in his own case, for Peter would periodically assume subordinate roles (as an industrial apprentice during the great embassy period, or lower level commander in a military campaign) – just so long as everyone remembered that he was also the Russian tsar and not to be trifled with. Last but not least, Peter had an innate love for boats and the sea. But for these characteristics, he would hardly have steered his country in the direction that he did – which certainly was not what most Russians were expecting...

[Peter encountered] plenty of resistance, both within Russia and beyond its borders, including a protracted war with King Charles XII of Sweden who had ambitions of his own that included turning the Baltic Sea into a Swedish lake and taking Moscow.

Mr. Massie tells the story masterfully, step by step, weaving in all sorts of fascinating details. But as he acknowledges at the end: "He was a force of nature, and perhaps for this reason no final judgment will ever be delivered. How does one judge the endless role of the ocean or the mighty power of the whirlwind?” 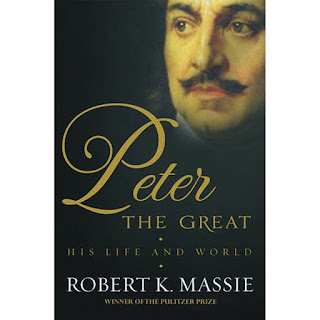 A few excerpts from a more extensive review:

The reader is introduced to a number of other historical figures such as Louis XIV of France, and Charles XII of Sweden -- Peter's great nemesis. The book is also something of a travelogue, as the reader is swept into Peter's Great Embassy to Europe, onto the high seas, up and into the Great Northern War, and into the swampy site upon which Peter built the jewel in his crown, the City of St. Petersburg. Finally, Massie addresses Peter's legacy and the impact his life had on Russia and Western Europe. The author's emphasis throughout is the significance and force of Peter's personality, and how his indomitable will changed Russia forever...

One amusing story deals with Peter's determination to travel abroad incognito and live as an ordinary workman. On one occasion while traveling in Holland, the Tsar was annoyed to be offered a grand hotel room. He noticed that in the corridor outside his room, some of his retainers were sleeping on the floor, wrapped in bearskins. Peter approached one of them, who was sound asleep, and kicked him till he awoke. "Quickly, quickly, I want to sleep there," the Tsar insisted, and "...threw himself on the warm bearskin and went to sleep."

The section on the Great Embassy is possibly the liveliest and most fascinating in the book. The reader is taken along on a rollicking tour of Western Europe, where Peter learns to build ships, to dance, make cheese, extract teeth, and -- along with his entourage -- leave an elegant London home (that was loaned to him) in a manner that would make a modern day rock band proud.

Peter is described as constantly seeking to be treated as just a regular man, insisting he be addressed as "Carpenter Peter," "Master Peter," or "Captain Peter," depending upon which occupation he was engaged in at the time. Anyone who addressed him as "Your Majesty," or "Sire" was ignored.

Very nearly every aspect from each period in Peter's life is examined and discussed in ways that are not just informative, but culturally enlightening. From English King William's cultural shock when he experienced Peter's Russian-style climate control (windows sealed shut to the point of stifling) and the English sovereign's resulting asthma attack, to Peter's cleverly crafted methods of dealing with his half-sister, the intelligent and ever-scheming Regent Sophia...

During Peter's first crossing of the English Channel, he insisted upon climbing aloft to have a good look at the rigging. This occurred during a heavy storm. The ship pitched and yawed as Peter climbed ever higher...

Massie takes great pains and many pages describing minute detail of military strategy, battles, and the founding of St. Petersburg, yet he all but ignores Peter's personal relationships, the one exception being his mother, who is touchingly portrayed...

[One] weakness of Massie's 934-page opus has to do with the common assumption that it was Peter the Great who broke open a window to Western Europe and dragged his countrymen through it, out of utter barbarism, and into civilization.

The author made no mention of western forays into Russia as early as Ivan the Great. True, it was nowhere near the magnitude that occurred under Peter's rule, but never once does Massie directly point out that it was the foundation laid by his predecessors that spurred him to action. Much is made of the young Peter's friendships with the residents of Moscow's German Quarter, but no reason for his interest in foreigners is given.

Peter the Great is a tour de force. It is also a story that deals with an awakening, whereby a man of high station but little education (though possessing an exceptionally strong desire for learning) seeks out and fulfills his curiosity, and lives his life as a great adventure. He was also a despot ["who cut off his subjects' heads as zestfully as he cut off their beards"]... Both sides of Peter's personality played a role in all that he would accomplish.

Here are some quotes from Mr. Massie's section on the Great Embassy:

"He was fascinated by the Quakers. He went to several Quaker meetings and eventually met William Penn... They talked in Dutch... [Later] Peter declared to his followers that 'whoever could live according to such a doctrine would be happy.' " (211)

"The Dutch sailed their smaller, round-nosed warships against the larger, heavier English ships with such bravery and seamanship that Holland became the only nation ever consistently to defeat the British navy." (190)

One of the leading bishops of the Church of England had this impression of the young Tsar:
"He is a man of very hot temper, soon inflamed, and very brutal in his passion; he raises his natural heat by drinking much brandy..." (210)

"The Russians, it was whispered by the foreigners among them, were really no more than 'baptized bears.' " (173)

UPDATE -- From an article by the journalist son of the late Reverend Alexander Schmemann:

"Obedience and ritual have ruled the Russian Church ever since the pivotal day in 988 when Prince Vladimir, ruler of Kievan Rus, ordered his people to be baptized in the Dnieper River. According to the legend familiar to every Russian, Vladimir had sent envoys abroad in search of a faith for his pagan nation.

"Those dispatched to Constantinople returned home awestruck by the Eastern Greek ritual they had witnessed in the Hagia Sophia, then the largest cathedral in the world. 'We knew not whether we were in heaven or on earth,' they reported.

"The religion imported by Prince Vladimir shaped the Russian nation and was, in turn, shaped by it. Orthodox monasteries became the spiritual, economic, cultural, and at times, defensive core of the nation. The churches that spread through Russia were awe-­inspiring in their magnificence and immutable in their ritual. To this day the language of the church is an archaic but mellifluous Old Church Slavonic. Priests in their glittering vestments are separated from the congregation by an elaborate icon screen, and choirs sing most of the liturgy, often with hymns by Russia's greatest composers. For worshippers, the experience is as otherworldly as a Baptist service is direct and unadorned."

A TV mini-series was made about Peter the Great, starring Maximilian Schell.