Friday Book Review -- SILENCE by Endo: "The Christian Vine in a Holy Swamp"

Shusaku Endo (1923-1996) published Chinmoku in Japanese in 1969. It was translated the same year in English as Silence. The movie by Martin Scorsese was produced in 2016 and is a faithful rendition of this spiritually searing book which is likewise a faithful rendition of several real life characters who lived in late 16th-century Japan. Christianity came to Japan in 1549 with the Jesuit missionary Francis Xavier.

The Church expanded under the sensitive leadership of Italian Jesuit Alessandro Valignano who came in 1579 and greatly accelerated the incorporation of an indigenous clergy. The planting of Christianity occurred during the Sengoku period (1467-1603) of warring daimyos (local lords). The period ended with a coalition of warlords uniting the country under the Shogun Ieyasu initiating the Tokugawa Shogunate (1603 -1867). The last warlords had occasionally struck out against the Christian converts and foreigners. In 1597 they crucified 26 Japanese and European missionaries in Nagasaki. The Tokugawas, however, would not be so haphazard. They understood the danger of Christianity to their project of restoring Japanese unity. They were encouraged to rid their land of the Catholic Portuguese priests especially by the Protestant English and Dutch seamen who had become their trading partners. Following the 1614 order of expulsion (when 300,000 of Japan's 20 million people were Christian) the methods of subsequent shoguns were increasingly systematic, brutal, and highly effective in eradicating the public expression of the iconic and sacramental life of Catholics. Below the surface, there were always embers.

The translation by William Johnston (Sophia University, Tokyo) includes well-chosen reflections of Endo in the Translator’s Preface: "I received baptism when I was a child... I had to decide to make this ready fit suit fit me or get rid of it. I wanted to get rid of my Catholicism... but I was finally unable to do so.  It is not just that I did not throw it off; I was unable to throw it off. The fact it had penetrated so deep in me was a sign it had become coextensive with me. But there was always a feeling it was something borrowed and I wondered what my real self was. This is the 'mud swamp Japanese' in me. From the time I first wrote novels, this confrontation of my Catholic self with the self underneath echoed in my work. I felt I had to find a way to reconcile the two."  Later, Endo says: "I was attracted to nihilism but then came to see the grandeur of the Catholic faith [editor's note: Scorsese says something very similar about his own Catholic journey.] The Japanese must absorb Christianity without a Catholic history...No doubt that is the peculiar cross that God has given the Japanese... I have trust in Catholicism because I find in it much more possibility than any other for presenting the full symphony of humanity. The other religions have almost no fullness; they have but solo parts. Only Catholicism can present the full symphony."

The basic story of the novel is about heroic Japanese martyrs and several Portuguese priests who apostatize. The priests do not apostatize because of their own torture, but because others are being tortured unless the priests renounce the faith. The ingenious Japanese persecutor had quickly deduced that torturing priests unto death allowed their public courage to multiply the faithful. He helps them see clearly the new situation: "You are not sacrificing for the Japanese people. They are dying for you." The public sign of rejecting the faith was to trample on the fumie (an image of Christ). The older priest Ferreira, and then later at his urging his former student Fr. Rodrigues, both apostasize and spend the rest of their lives working in collaboration with their overlords. Each year they publicly trample the fumie. Little children point at them and taunt, "Apostate Peter!  Apostate Paul!" There is another apostate Kichijiro -- a Japanese 'Gollum' disfigured by his own lifetime of betrayals. Kichijiro knows he is weak and returns at the end of the book to ask Rodrigues to exercise his power of absolution one more time for a penitent. Knowing the priests back home would consider it a sacrilege and Ferreira would count it meaningless, he absolves the sinner. Rodrigues still loves the face of Christ and when he trampled he had seen in the Lord’s eyes the permission, "Trample, for this I came into the world that men may trample on me." At the end Rodrigues hears the Lord. "I was not silent. I suffered with you." 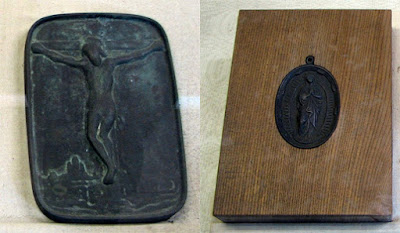 When Ferreira was convincing his student to step on the image, he argued against the entire project of evangelizing the Japanese: "...the Japanese are not praying to the Christian God. They twisted God to their way of thinking in a way we can never imagine. That is not God.  It is like a butterfly caught in a spider’s web, at first it is certainly a butterfly, but the next day only the wings and trunk -- the externals are those of a butterfly; it has lost its true reality and has become a skeleton. In Japan our God is just like that butterfly... The mission lost its meaning. the sapling I brought quickly decayed to its roots in this swamp. It was a long time before I noticed."

The face of Christ commanded "Trample!" -- and the voice of Christ said, "I was with you." The author sees this, somehow, related to Christ’s words to Judas, "Go quickly,  do what you must do." This aspect of the book has led to reflection, debate, and severe condemnation at notable conservative Catholic venues.

But here let us se if we can answer the arguments of the old apostate priest who is clearly presented in the book and movie as a broken and compromised man -- not in any way an admirable figure. Were his arguments like Lucifer's: a rationalization to get others to follow him in his turning from God? Or is there something of the swamp of Japan that will not let the sapling of Christianity grow in its soil? Those who read this book or see the movie and place the Portuguese Jesuits at the center of the narrative may miss this central question of a nation’s capacity for baptism.

One climax in the book is close to its beginning when this very special people of the islands first hear the good news. The film beautifully captures and the book states plainly, "For the first time they were treated like men." The absolute joy of the gospel message that God had come among us as Christ in history and now as the same Christ in the Eucharist filled men with a joy that sang the psalms until the waters finally washed over their crucified bodies. What did they care? They had eaten the bread of life. They were going to live forever. They now lived in the state of grace; they were in communion with God. Ferreira was right -- they knew a God that he did not. How they hungered for the chance of confession and opportunity for the Eucharist that only a priest could bring. They knew a God the Dutch and British traders did not know as well. They understood what it meant to belong to a Body. They understood that so much more deeply than their European fathers in the faith.

Three hundred years later the Japanese would function as a single social body with their Emperor as a head (see The Mystical Body of Japan). The army and farmers, especially, understood themselves as his working arms and marching legs. There is some great truth about the social nature of humanity and the particular manifestations of communal bonds that Japan (and China) know more deeply than most missionaries who teach them. In some way these ancient cultures are our elder brothers who have established communities of law, custom and ritual in accordance with  the natural law mandates of Noah.

And about that butterfly. It is true the trampled Christ no longer seems a king, much less God, hung mutilated on a cross or dissolved as man’s food. But he is mightier than any spider's web and there is no swamp he cannot draw into Himself. He has been deformed before to rise again in glory. The Body of Christ will not be fully glorified until the great nations of Japan and China are baptized. We who bring the sapling vine to these great cultural civilizations must be ready to see new contours of Christ’s reconstituted Body in their baptized forms. This beautiful book and great Catholic author have introduced another section of the orchestra to help fill the Catholic symphony.