The Feast of October 12th—Mary, Columbus, Catholic America, and the Cosmic Race 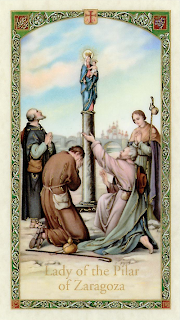 The practice of turning specific national days of remembrance into long family weekends by observing the nearest Monday domesticates the public liturgy of civic life. It also diminishes other ties that may resonate with the date itself. October 12 is one such day.  The 12th of October is the most important Marian feast day of Spain. Our Lady of the Pillar appeared to St. James there in the earliest evangelization of the Iberian peninsula. It is the only reported apparition of Our Lady before her assumption into heaven. [James returned to Judea, where he was executed in the year 44 -- the first Apostle to be martyred].

In 1492, the Genoan explorer Christopher Columbus sailed west under the sponsorship of Spanish monarchs to find a route to the Indies unobstructed by Muslim threats. The Moors (North African and Spanish Muslims) had just been expelled from Spain after centuries of war.  Columbus had told his seamen after two months at sea if they did not see land by the feast of Our Lady of Pillar, they would turn back.

On October 11, 1492, an island in the present day Bahamas was sighted. They set foot on land the next day. 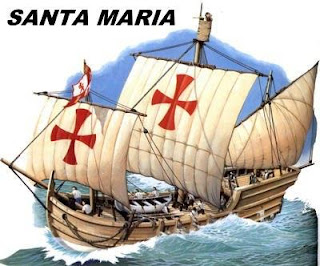 In Mexico, Argentina, Chile, and many other countries of Hispanic America, October 12 is celebrated as Dies de Raza: “the day of the race.”  This term was used by a Mexican philosopher, Antonio Caso, in 1918 to celebrate the mixture of Spanish and indigenous cultures to shape “the Mexican mestizo race.”  Caso wrote eloquently against the Darwinian notion of survival of fittest and scientific empiricism as the only way to knowledge. He included his philosophical life as an apostle of intuition and love as the highest human expression.  In more recent years the American  mixing of bloods has been given a more malignant interpretation. Venezuela under President Hugo Chavez, in 2002, changed the day to the Día de la Resistencia Indígena (Day of Indigenous Resistance). The noble savage and purity of Indian blood prevails!

Christopher Dawson said, “The Catholic and Protestant worlds have been divided from one another by centuries of war and power politics… nowhere is this state of things more striking than in America, where the English Protestant North and the Spanish Catholic South formed two completely different worlds which had no mental contact with one another.”

October 12 is a perfect  day to celebrate how we Americans are going to bridge that gap under the inspiration of Our Lady of the Pillar – and Our Lady of Guadalupe who reappeared 1500 years later in a different dress to show us the next steps on the same path. For sure it is a great day to celebrate the unmitigated blessing of bringing the good news of Christianity to the Americas. On October 12, Columbus the bearer of Christ had a great REUNION with long lost relatives mutually  descendant from Adam and Eve. The Reunion of humanity will occur when we recognize the  Fatherhood of God and the Kingship of Christ, Head of the  Church, and alpha male of the human race(species).

UPDATE: Walter Russell Mead does a good job of explaining the Catholic fraternal origins of Columbus Day in America.

Our review of a book on Columbus by Samuel Eliot Morison.

2017 update: In light of Catalonia vote for independence from Spain this year's October 12 National Day celebration(for the nation of Spain) took on a renewed vigor. Unfortunately the real binding force of Spain-the Catholic religion-is still underplayed in secularist Spain.  One third of the clerical killings during the Red Terror of the Spanish Civil War occurred in Catalonia.

2108 Update:
The most famous philosopher of La Raza is Jose Vasconcelos (1882-1959).  He wrote The Cosmic Race ( La Raza Cosmica) in 1925.  He sees the spiritual role of the Americas to be the grounds where all the races are reconciled through intermarriage in a new spiritual "cosmic race". He contrasts this with the Anglo Saxon approach of trying to create a separate utilitarian superior race forever.  He thought Hitler understood race and spirituality better than the technocratic and soulless British and Western allies. He has been tarred as a Nazi by many modern critics.
Our Lady of Guadalupe is the feminine face of racial reconciliation as a unique mark of the Americas.  The dark skinned virgin reminds us that the Church like the Americas is the place of racial reconciliation under God.
Posted by Farmer at 2:30 AM