The "scientific revolution" was a centuries-long project of dividing man from the primary powers of his intellect to synthesize, categorize, and know as a sacral being in terms of a sacred whole. The modern scientist came to think very much of himself and very little of man. Hundreds of years before that egotistical destabilizing fragmentation, a great Dominican saint rose in Italy to do just the opposite.  Thomas Aquinas was educated by the greatest natural philosopher (student of physical and biological sciences) of his time: Albert the Great. He benefited from the rediscovery of Greek texts of Aristotle and thus learned the metaphysics, ethics, politics, and categories of the Greeks. He knew the Bible intimately and prodigiously. His New Testament commentary, verse by verse, is a compilation of the Church Fathers' commentary as well.

His purity was no small part of his clear vision; and his humility no incidental in his ability to properly categorize. He was called the 'angelic doctor' because the towering intellectual understood the metaphysical necessity and scriptural testimony of those spiritual beings who so embarrass the modern Catholic PhD. Above all, he knew how to pray first -- and write and formulate from that posture. The best biography of Aquinas is G.K. Chesterton's The Dumb Ox.

The online site Universalis, which provides the prayers of the Daily Office in a usable everyday form, also provides a short bio of saints of the day. Below is their excellent synopsis.

To honor St. Thomas, consider going to Universalis and joining the worldwide church in one or more of her daily prayers. It will aid your struggle for holiness and make you smarter as well. 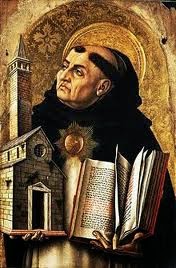 
"He was born of a noble family in southern Italy, and was educated by the Benedictines. In the normal course of events he would have joined that order and taken up a position suitable to his rank; but he decided to become a Dominican instead. His family were so scandalized by this disreputable plan that they kidnapped him and kept him prisoner for over a year; but he was more obstinate than they were, and he had his way at last.

"He studied in Paris and in Cologne under the philosopher Saint Albert the Great. It was a time of philosophical ferment. The writings of Aristotle, the greatest philosopher of the ancient world, had been newly rediscovered, and were becoming available to people in the West for the first time in a thousand years. Many feared that Aristotelianism was flatly contradictory to Christianity, and the teaching of Aristotle was banned in many universities at this time – the fact that Aristotle’s works were coming to the West from mostly Muslim sources did nothing to help matters.

"Into this chaos Thomas brought simple, straightforward sense. Truth cannot contradict truth: if Aristotle (the infallible pagan philosopher) appears to contradict Christianity (which we know by faith to be true), then either Aristotle is wrong or the contradiction is in fact illusory. And so Thomas studied, and taught, and argued, and eventually the simple, common-sense philosophy that he worked out brought an end to the controversy. Out of his work came many writings on philosophy and theology, including the Summa Theologiae, a standard textbook for many centuries and still an irreplaceable resource today. Out of his depth of learning came, also, the dazzling poetry of the liturgy for Corpus Christi. And out of his sanctity came the day when, celebrating Mass, he had a vision that, he said, made all his writings seem like so much straw; and he wrote no more.

"Let us pray for the Holy Spirit to inspire us, like St Thomas, to love God with our minds as well as our hearts; and if we come across a fact or a teaching that seems to us to contradict our faith, let us not reject it but investigate it: for the truth that it contains can never contradict the truth that is God."


UPDATE: Don't miss this short video on Aquinas' central teaching on nature and grace, by Taylor Marshall; and another on the reasons why Catholic men in every generation should love the Italian saint (who's buried in the southwest of France).