(from the Gospel of John, read on Good Shepherd Sunday)

The heart of the shepherd is that of a protector ready to shed his own blood in the face of wolves attacking the sheep. It is unfortunate that the dominant iconography of the good shepherd is not a man standing in front of his flock taking on a wolf, but the image of a usually mawkish Jesus cuddling a lamb in his arms. Now, Christ himself said in Scripture that he would leave the ninety-nine sheep to go find the lost one, and "lay it on his shoulders, rejoicing." That image was also well known in the ancient world as the kriophoros—the “ram bearer” as a figure preparing for sacrifice. 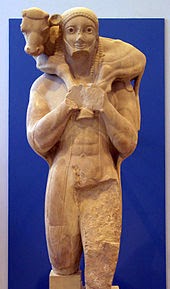 But the shepherd in today's Gospel is in a different stance. There are many traits of the Shepherd which Scripture teaches, beginning with the clarity and recognition of his voice by his sheep. Abel and Abraham and the first Christmas witnesses were all shepherds. I always think of those noble shepherds of Christmas night coming to protect the babe in the cave from wolves and beasts, who in nature often sense the vulnerability of birthing. Certainly, Satan might have thought to send an animal precursor to Herod’s men. But Joseph had his shepherd brothers there. Like so many times in history when strong good men are present, there is no vicious tale to tell, and thus the work of the protective peacemakers is unheralded.

The greatest of the shepherds until Christ was, of course, King David. He has never been confused with a nursemaid. David was consecrated by Samuel, but he won the allegiance of the men of Israel by his courage against a wolf-giant that had frightened Saul’s soldiers into their tents. When King Saul berated David as no match for Goliath, the son of Jesse reminded him:

“When a lion or a bear came and took a lamb from the flock, I went out after him and [attacked him], and rescued it from his mouth; and when he rose up against me, I seized him by his beard and struck him and killed him. Your servant has killed both the lion and the bear; and this uncircumcised Philistine will be like one of them, since he has taunted the armies of the living God.” 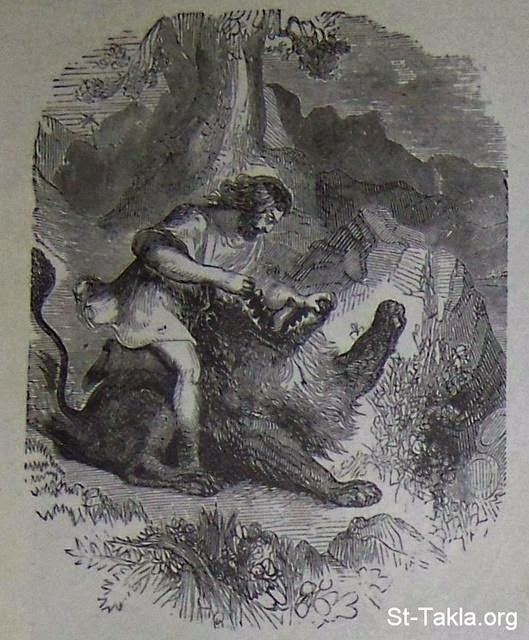 The pope wears a pallium over his shoulders made of lamb’s wool to show his authority as a shepherd. Let us make for every bishop a new icon of the Good Shepherd—a picture or statue of a man seizing and striking a lion or bear to protect his flock. The feast of the Good Shepherd reminds us that the first service of the ruler is to protect—even if that means death. For today’s priesthood that means to risk reputation and career pathway to clean out the soft wolves among the shepherds, those men who have emasculated the apostolic fraternity. This corruption of the masculine protective personality has paralyzed the nations of Christendom. Our fathers have left us wealthy, well-organized, and well-armed; but as our fellow Christians are slaughtered in Africa and the Mideast, we watch like hirelings behind the bushes.

The evil we are hiding from was foretold in the Book of Revelation. Satan was infuriated that he could not harm the woman who was giving birth to her Son. "Enraged at her escape, the dragon went off to to make war on the rest of her offspring, on those who keep God's commandments and give witness to Jesus."

Lest we allow ourselves to become too comfortable that this bloodletting from afar is an inevitable work of the Evil One causing us sadness but no protective response, we should look to Revelation again for the last of the Biblical references to the Shepherd: "She gave birth to a Son -- a boy destined to shepherd all the nations with an iron rod." 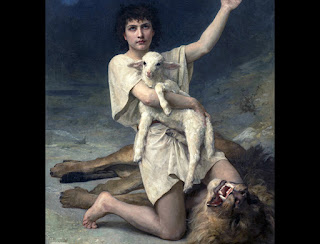 David the Shepherd as Slayer
Posted by Andrew Lynch at 5:00 AM