SOLEMNITY OF SAINT PETER AND SAINT PAUL, APOSTLES, June 29: What is an Apostolic Church?

Every Sunday at Mass, Catholics stand to profess in the Creed that we believe in "the One, Holy, Catholic, and Apostolic Church." What does it mean to say the Church is Apostolic, and why is the feast of St. Peter and St. Paul one of the ten holy days of obligation in the Catholic Church? The feast day reminds us that the Church wants us to reflect on these men and their office as apostles, in the same way we reflect on Mary’s Immaculate Conception or Christ’s Ascension into heaven. These are central truths that organize the way we understand reality and live our common life as a Church.

Both Peter and Paul had their names changed in their encounter with Christ.  Saul became Paul and Simon was re-named Peter.  Christ the new Adam re-organized humanity, not as the blood sons of Adam and Eve, but now as a sacral brotherhood that would allow entry into the life of the Trinity. “Those whom He foreknew, he predestined to share the image of His Son, that the Son might be the firstborn of many brothers.” David drew Jonathan (the blood son of Saul) away from his own kinship claims to succession, into the newly anointed Davidic Kingdom.  So Christ configured the first twelve apostles - all loyal sons of Israel - into the new priesthood that would be the twelve foundation stones of the Church. Calling Paul an apostle a decade later showed that some vital aspect of the apostolic duties and office of the original Twelve would live on in other elected men through the ages. The joining of Paul to the apostolic office and his mission to the Gentiles gives evidence that the Church built on a highly localized brotherhood of Galileans was to spread all over the earth, and yet still be fully manifested in such crucial Catholic local forms as the parish Mass and the diocesan Bishop and his presbytery.

The fraternal relationship of Christ to his chosen men forms the living sinew of the new Temple, in which the presence of God will be carried to the ends of the earth. This is the sacramental order that the Church establishes as the central organism to reorder humanity under the Father. Holy Orders is the third of the sacraments which imprint an indelible mark on the soul; and, like Confirmation, it shows again how indispensable is the communion of the bishops to the Church’s sacramental order. Peter and the apostles live on in the pope and the bishops, and the bishop and his diocesan priests. These are the patriarchal fraternities that mirror the Trinity, and provide the Catholic framework for the baptizing of nations, and the public ordering of human beings necessary to prepare for the Second Coming.

To this priestly apostolic order are given particular powers to forgive sins, cast out demons, and definitively proclaim the message that God dwells among us and invites us to dwell in Him.  This priestly authority to beseech the Father -- to send the Spirit to bring us back in the presence of the Son’s sacrifice -- is the Mass. The priests have been given the keys to a mysterious "time/space machine" which binds dispersed humanity into the one Body of Christ.

It was Peter’s proclamation, not that Christ was the Messiah (a big deal in itself) but that he was the Son of the living God, that evoked from Christ His ordaining of the Petrine office. Christ did not award Peter’s faith. In fact, he told him clearly that Peter was not talking on his own. The Holy Spirit allowed Peter to profess the divinity of Christ, and upon that central theological truth was the Church built. The real rock is not so much Peter, but the accurate testimony of Peter that Jesus is God-become-man.  Christ is the cornerstone, and the apostles are the twelve foundation blocks. The keys are given to Peter to unlock mysteries in teaching, and unlock jail cells in releasing men from their sins. It is no mistake that the second reading of the feast day is an angelically engineered jailbreak for Peter -- recalling an earlier prison tomb that was evacuated so that hell might be harrowed. The priestly powers  are conferred, not on every man who chooses Christ, but on certain men whom Christ chooses.  Peter was not Superman dressed like a fisherman who burst out of prison to work miracles.  He was Peter who was led out of prison by an angel, and called out of his fishing boat by Our Lord. And that Peter was given the authority to work the miracles of healing the sick and, more importantly, forgiving men their sins.

Christ asked, “Who do men say the Son of Man is?”  Whenever Christ called himself the Son of Man, he was affirming his human identity. In Hebrew, he would have called himself the Son of Adam.  Peter, by power of the Holy Spirit, answers Christ’s directed question to the apostles about his identity: “Thou art the Christ, the Son of the living God.” That was the instance the Holy Spirit spoke through Peter, speaking for the whole church with an infallible statement. We share that infallible authority every time we also comply with the Spirit, and read Scripture or profess the Creed together at Mass. It is all part of being an apostolic church with real authority given by Christ through the Spirit.

In these recent weeks of the Church liturgical year, we meditated on the coming of the Holy Spirit at Pentecost, the Trinitarian nature of God on Trinity Sunday, and the presence of Christ in the Eucharist on Corpus Christi. Today let us give thanks and praise for the Apostolic priesthood that bridges  those spiritual realities and our lives in the practice of our sacramental life. The rule of the Father and filiation of the Beloved Son passed down through the Scriptures find in the Eucharistic Apostolic fraternity that restoration of brotherhood under the Father meant from the beginning as the destiny of man. 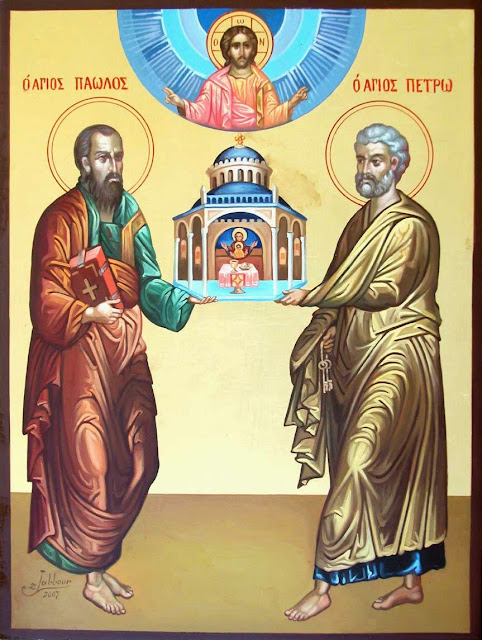