Memorial of St. Ignatius of Loyola -- 'Militia est vita hominis in terra' (Man's life on earth is a warfare)


"Everything that Jesus did, from His crying as a Babe in the cradle to His getting tired and falling asleep, to His agony in the Garden, all of that is a pattern for us to imitate."

Father John Hardon, the Jesuit who died in 2000, explains that the Person of Christ is the first attribute of the spirituality of Saint Ignatius: "Man's virtues are God's attributes." 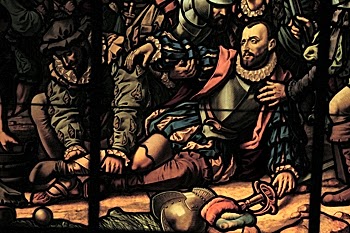 The founder of the Jesuits -- unlike his Protestant contemporaries -- understood the true dignity of human freedom. Take a look at Father Hardon's fine essay.

"Take Lord and receive all my liberty... To Thee, Oh Lord, I return it. All is Thine... Give me Thy Love and Thy Grace for this is sufficient for me."         (Saint Ignatius of Loyola)

The First Jesuit Pope is Pope Francis. Many modern day Jesuits have betrayed the masculine personality of Ignatius and ignored the Evil One who Ignatius was always careful to discern and oppose. This has confused many conservative Catholics about Pope Francis. Pope Francis is not James Martin. The Pope  is not playing to the spirit of this age. Quite the contrary, Pope Francis is bringing a much needed dimension to the papal office which has been sorely lacking for over half a century. If John Paul gave priests the words of a Prophet and Benedict XVI taught the clergy to reverence the liturgy as a  priest, we believe Pope Francis will bring the king's ruling function to the priesthood and episcopacy. We believe the Pope has been misunderstood by his intellectual critics of the global North. A series of our defenses of the first Jesuit Pope.