Pence: Why Catholics should rally behind the Mormon patriarch 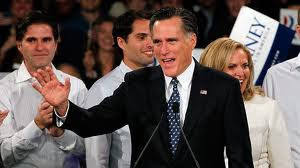 Despite the petulance and hair-pulling of a sizable number of conservatives, do you have any doubt that Mitt Romney will be the strongest nominee to go toe-to-toe with Mr. Obama?

Pence: Governor Romney has an authoritative presence, can speak coherently, and has acted as an executive. He has a map in his head of the world; and is self-disciplined intellectually, emotionally, and morally. He is not an adequate candidate -- he is a great one.

What assures you that the 2012 campaign will not be a reprise of Bob Dole (who lost by more than eight percentage points to President Clinton) or John McCain (more than seven points)?

Pence: My son has a Martian test he applies in picking presidential winners. He says turn off the sound and watch the two candidates. Pretend you are a man from outer space, and ask which man looks and gestures like the commander-in-chief of a nation of 300 million. Do the test. We are in a lot better shape this time.

Romney is a man with five sons, and he has been married to the same woman for forty years. How big a difference does that make?

Pence: Six years after Bob Dole and Bill Clinton ran against each other for the presidency, both their wives were US Senators from states they adopted for career enhancements. Bob Dole, John McCain, and George Bush all had wives anxious to show their feminist credentials culturally. Mrs. Romney is of a different cloth. I thought the image of Barrack Obama with his intact family was very powerful and important for American culture. I think the image of a father with obedient and strong sons is such a missing icon of biblical patriarchy in American public life that Romney and his sons will be even more inspiring.

The patriarchal Mormon religion changed its policy in 1978 about allowing black men to receive the priesthood. Better late than never?

Pence: The Mormons could change because they have an ordered hierarchy with authority. It was a crucial recognition spurred by the international character of the Mormon mission and revealed in communal prayer. What a great religious resonance with the American deepening of the civic fraternal bonds of duty between black and white men that was forged in Harry Truman’s order to integrate the military services.

Would Romney as president be more open to America protecting Christians in the Mideast?

Pence: I hope so, but I had also hoped that Barack Obama might cut the interracial civil-rights movement from the feminist/ homosexual pretenders. Romney, like John Kennedy, has a very strong understanding that his ecclesial body is distinct from his political community. They both came from church traditions that could not be confused with the American nation. That may help Romney see the providential role of the nation in protecting the communal right to worship elsewhere in the world. American Protestant presidents have not tended to think of the persecution of Eastern Orthodox or Catholic Christians as their battle. Romney is of a very different tradition, so he might see more clearly a national mission to protect different expressions of the Christian obligation to worship. What an irony if the religion we most disagree with theologically could produce the best practical protector of persecuted Christians.

Mr. Romney seems hawkish on Iran as is Mr. Santorum -- a blessing or a curse?

Pence: Our ally Israel sees Iran as an existential threat. This is our concern too. The protection of Israel, however, must be tied to the protection of Christians in the Mideast and alliances with Muslim nations who insure the liberty of worship to their citizens. It is freedom of worship and fruitful marriages -- not freedom for abortion and sodomy -- which are the protected sacred rights of human nature. We will know we are having a real foreign policy discussion when we hear much more about the Shia/Sunni split within Islam and the emerging nations. We cannot make coherent policy about Iran without a much fuller strategic discussion questioning our alliance with Saudi Arabia and our suicidal fascination with a separate Palestinian state. Isn’t a Lebanon which insures Christian protection and freedom a more pressing call than the fantasy of a separate secular Palestine?

As the U.S. moves into the future, you argue that seeing reality as analogical becomes even more important. What exactly does that mean?

Pence: The social order is a reflection of the sacred order. Our social order is presently set against the sacred ordinances of natural law. When people are confronted with the natural forms of human agreement and social protection they will experience a deep resonance. Watching John McCain and Sarah Palin argue for the "leadership of mavericks" was exactly the adolescent posturing which we are trying to replace with the traditional order of the President and his men protecting the country, while a mother and her children fill the home. A leader may make certain propositions which are alien theologically, but he also teaches if the form of his life is deeply orthodox. The nation is an analogical form to the church, not an enforcer of its propositions.

Mrs. Romney told an interviewer that she and her husband "both came from immigrant families." She comes from Welsh miners; and Mitt's father George was among those in the American colony in Mexico ejected by Pancho Villa. She says, "They came with nothing." (George remarked that "we were the first displaced persons of the 20th century.") The struggles of families like the Romneys and Obamas and Kennedys are what make America great, right?

Pence: He has a way to do it: as a robust religious masculine definition of the American nation. He has to talk to the men of all these different traditions as "fellow American countrymen." The father and his five sons steeped in the socialization customs of the Mormon public male priesthood have the best chance of calling up our common fraternity since the older Kennedy brothers did it fifty years ago. About 90% of America’s 2.5 million inmates are males. The great godless feminist inversion has not worked. Masculine order can set the prisoner free only if it provides an even more reliable structure of masculine order in which a man will participate in the protection and work of communal life. Mormons figured this out amidst the priestless confusion of the "burned-over districts" of Protestant evangelization during the Second Great Awakening.


[Go here for a review of the Romney biography written a few years ago by Hugh Hewitt, radio host and strong Evangelical].
Posted by Farmer at 12:37 AM