"His architecture was not in stone but in nations"

The 13th century was the highest of the High Middle Ages.  Saint Francis of Assisi died in 1226; the previous year baby Thomas -- the future Angelic Doctor -- was born to the Count of Aquino.

Far to the East, Genghis Khan was coming to the end of his long career of conquering.  He had founded the Mongol Empire in 1206 (would endure for a couple centuries) -- which at its height was twice as large as the Roman Empire, spanning 6000 miles. 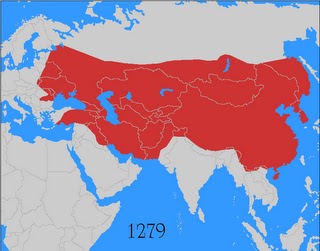 Prime Minister Nehru of India called Genghis Khan [1162 - 1227] "the greatest military genius and leader in history... Alexander and Caesar seem petty before him."  The Mongol Khan believed in "the unchangeable law for ever and ever, and no one could disobey it.  Even the emperor was subject to it." 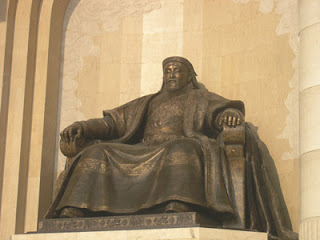 It is fascinating to browse through Genghis Khan and the Making of the Modern World by Jack Weatherford (2004).  All the folks today who loudly lament the demise of the American Indian should take a break from their sentimental dancing with wolves, drop their 'dream-catchers,' and pick up this book.  Genghis was a leader of noble savages worthy of high acclaim.

The Mongol army overran everything from "the Indus River to the Danube, from the Pacific Ocean to the Mediterranean Sea... Christians, Muslims, Buddhists, and Hindus [knelt] before the dusty boots of illiterate young Mongol horsemen."

"The Mongol was ideally suited to travel long distances; each man carried precisely what he needed, but nothing more... Each squad of ten carried a small tent.

The movement and formation of the Mongol army were determined by two factors that set them apart from the armies of every other traditional civilization.  First, the Mongol military consisted entirely of cavalry, armed riders without a marching infantry...

The second unique characteristic of the Mongol army was that it traveled without a commissary or cumbersome supply train other than its large reserve of horses that always accompanied the soldiers.  As they moved, they milked the animals, slaughtered them for food, and fed themselves from hunting and looting.  Marco Polo [who worked for Kublai Khan, grandson of Genghis] alleged that the Mongol warriors could travel ten days without stopping to make a fire or heat food...

The decimal organization of Genghis Khan's army made it highly mutable and mobile... The only permament structures he erected were bridges... They sought not merely to conquer the world but to institute a global order based on free trade, a single international law, and a universal alphabet with which to write all languages.

Crushing the will of the enemy was always the top priority... [Trying through propaganda] to win the battle before the first arrow was shot across the battlefield, to defeat the enemy by first creating confusion and then instilling fear to break his spirit...

Above all else, Genghis Khan waged war with this strategic purpose in mind: to preserve Mongol life... On and off the battlefield, the Mongol warrior was forbidden to speak of death, injury, or defeat... Winning by clever deception or cruel trickery was still winning and carried no stain on the bravery of the warriors...

As lifelong nomads, the Mongols learned early to fight on the move... It mattered not at all whether he killed the enemy while attacking toward him or fleeing from him."