In America's civil war, less than a million died.

Hong Xiuquan, who believed himself to be Jesus' younger brother, led the mass revolt that nearly toppled the Qing Dynasty. [Founded in 1644 by Manchu tribesmen who swept down from the north, this final Chinese dynasty ended in 1912].

"The uprising spread with incredible swiftness and spontaneity.  They captured the city of Nanjing in 1853, massacred its entire Manchu population, and held the city as their capital and base for 11 years until the civil war ended."

Britain (and France) intervened on the side of the government in Beijing:  "With American encouragement, the British supplied arms, gunships, and military officers to the Manchu government and ultimately helped tip the balance of the war in its favor."

Check out this "Times" review of Stephen Platt's new history; and an even better one in the "WS Journal" which points out similarities between the insurgents and America's Confederate soldiers, and ends with this anecdote:

In the 1970s, Richard Nixon became the first sitting American president to visit [China], but in the 1870s Ulysses S. Grant was the first former occupant of the White House to do so. One official that Grant met in China was [retired military commander] Li Hongzhang, by then a viceroy. According to a letter published in the New York Herald, before meeting the famous American he had long admired, the viceroy noted how "funny" it was to have a surname so like that of "General Grant's opponent." This fact notwithstanding, Grant and Li became friends, which perhaps should not surprise us, given something important they had in common. "General Grant and I," the viceroy reportedly said at one point during Grant's visit to China, "have suppressed the two greatest rebellions known in history." 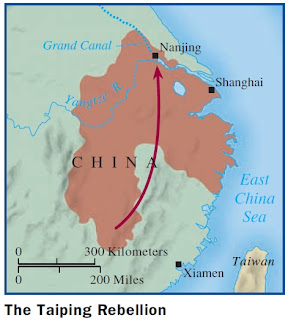 UPDATE:  Less than a  century later, Nanjing was the site of atrocities by the Japanese army.  During the winter of 1937-38, the number of Chinese raped and slaughtered there is staggering.
Posted by Farmer at 12:02 PM