LBJ and Bobby Kennedy were like two scorpions in a bottle


Several years ago I glanced at a couple of the earlier volumes in Robert Caro’s biography of Lyndon Johnson, and found the narrative fair to good… but his most recent, The Passage of Power (which is number 4 of a proposed five), is mesmerizing throughout.

Covering Johnson’s frustrating stint as subdued “second fiddle” – his three years in the vice-presidential desert – and then his ascension after JFK’s assassination, the tale keeps returning to the long hatred between Robert Kennedy and Lyndon Johnson: “the greatest blood feud of American politics in the 20th century.”

The book carries us to LBJ's landslide election over Barry Goldwater.  The next volume, of course, will include all the crazy events of 1968: Johnson squeaking out a victory over Gene McCarthy in the New Hampshire primary, RFK's opportunistic decision to throw his hat in the ring four days later, and the withdrawal from the field by the President (who, throughout his electoral career, had an outsized fear of losing and "humiliation") a fortnight later.

For the best-written review, check out Garry Wills. 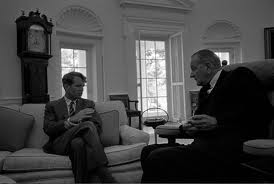