Yesterday I read the latest on the nation known as ‘Corazon de America’ (Paraguay being situated in the heart of the continent). 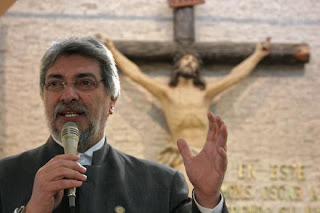 Fernando Lugo, the erstwhile Catholic bishop, was impeached and ousted as president.  His election four years ago ended more than six decades of rule by the right-wing Colorado Party.  One of his goals was better land distribution.

Other nations in South America, nervous about any democratic toppling of governments, have now pulled their ambassadors from Paraguay; and Venezuela has threatened to cut off oil supplies.

With Paraguay’s population at about 6 ½ million, the two largest cities are the capital Asuncion and Ciudad del Este.

Aside from Spanish, which language is understood by 90 percent of the citizens?  Guarani.

[The article also touches on General Stroessner, the dictator from 1954 until 1989 when he fled to Brazil to live out the rest of his life.  Decades earlier, his German father (a brewery accountant) had emigrated and married a wealthy Paraguayan].

UPDATE:  Our former ambassador to Paraguay, mentioned in the article as having released an album of Guarani folks songs, is now serving as the mayor of Coral Gables (home of the University of Miami).
Posted by Farmer at 10:13 AM