In 1970, more than ninety percent of Brazilians were Roman Catholic – but the figure has dropped below two-thirds.
Evangelicals are almost a quarter of the population now.

In other words, in Brazil, Catholics are less than 8/12 and falling.  Evangelicals are nearly 3/12 and rising.


[There are about 1.2 billion Catholics in the world; half of them live in Latin America.

The five countries with the greatest number of Catholics: Brazil, Mexico, Philippines, USA, and Italy.


One of the churchmen mentioned as a leading contender to become the next pope: Cardinal Odilo Scherer.
He is the archbishop of Sao Paulo – the largest archdiocese in the country.  His mother’s family was originally from Germany. 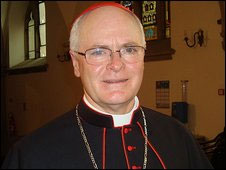 [Cardinal Scherer looks like he could be a blood brother to the man who, in recent decades, has exhibited more common sense and trust in the people than anyone else in our nation's capital: Brian Lamb, C-Span's best interviewer].