The Mughal Empire consolidated Muslim rule in the Indian subcontinent [see this map]. The oldest parts of the empire were the backbone of West and East Pakistan, which were the Muslim sections partitioned from the British Raj (Hindu for "Rule") granting India national independence in 1947.  The Mughals carried the Genghis Khan legacy and Persian culture, as well as Islam.

The Taj Mahal (Urdu for “crown of palaces”) was built from 1632-53 by a Mughar sultan and dedicated to his wife. 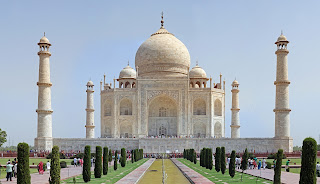 One of the greatest heroes of Hindu nationalism broke the Mughal rule and laid the foundation for the Maratha empire.  C. Shivaji Maharaj (1630-80) had a spiritual devotion to India taught to him by his religious mother. From a young age he developed a walking knowledge of his land, and by his twenties had a loyal band of officers (including Muslims) who would help perfect his commando/guerilla approach to war. 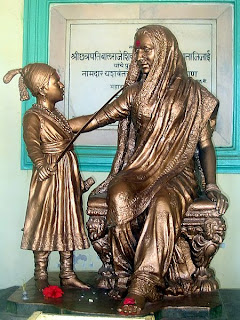 Shivaji and his mother – she taught him to love India by loving the great epics, Ramayana and Mahabharta.
[Map of Maratha realm here].

The British Rule (Raj) lasted until 1947 when India and Pakistan were granted independence. East and West Pakistan were under one rule as the Muslim state. In March 1971, the Bangladesh liberation war was begun, ending with intervention by India and the defeat of Pakistan in December of that year. Though both Muslims, the Bengali-speaking coastal people separated themselves from the landlocked Urdu-speaking westerners. 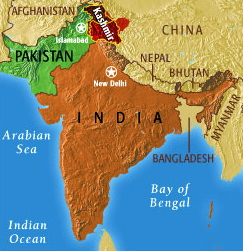 The western border of Pakistan separates it from another Muslim country, Afghanistan. The “red line” drawn to separate them is called the Durand line (after the British foreign secretary Henry Durand who drew it in 1893). Afghan president Hamid Karzai (2004- ) called it "a line of hatred that raised a wall between the two brothers."

One important ethnic group separated by the porous barrier is the Pashtun. Most Taliban members are of the Pashtun tribes.

At the northwest border of India and eastern Pakistan [see this map] is another important tribe cut by national borders -- the Punjabi.  (Comprising 40 percent of Pakistan's population, their language ranks as the most widely spoken in that nation).

The Punjabi tribal loyalties formed the soil of one of the most interesting religions of the world: the Sikhs.  Formed in the 15th century at a bloody border with incoming Islam, the Sikhs are monotheistic, educated, elegant and accomplished soldiers.  Most men have Singh (‘lion’) as part of their names, and are required to be armed as a tribute to liberty. Most women take as part of their names Kaur (meaning ‘princess’).

One of the recent leaders of the Sikhs made this comment:

"A human is a blend of saint and soldier; this is a complete person. If you are not a soldier your sainthood will be kicked around. If you are only a soldier and not a saint, you will start kicking others around."

The present prime minister of India is a Sikh: Dr. Manmohan Singh. He is the first non-Hindu prime minister and an accomplished economist. He won reelection for a second five-year term in 2009.

There are 30 million Sikhs worldwide (which is more than the combined number of Jews and Mormons).  Most of them live in the Punjab region of India.


I. Physical Geography (including a purely biological assessment of human demographics, and food and shelter strategies)
II. Religious loyalties (including intersections of ethnic and language groups)
III. Military history (including present and past allies and enemies)

These are the three categories that our AOA blog tries to employ in laying out a realistic depiction of the historical landscape in which the Church and nation act in the Divine drama. Part of the miniaturization of life (and infantilization of American males) in the last 50 years has replaced adult statesmen – and their concerns of basic geographic literacy and a working knowledge of the nations – with the narcissism and identity-preening of adolescent males and careerist feminists.
Posted by Farmer at 3:16 PM