How long a period is required to take the measure of a man? Watch and listen for twenty seconds to the sagacity of one of America's finest warriors.


When Harry Truman relieved Douglas MacArthur of command of the war in Korea, this was the man called to step into those big boots.

"As difficult as the situation in Korea was, it's hard to imagine a commander better suited to handling it than Matthew Bunker Ridgway. Like MacArthur, he had literally spent his entire life in the U.S. Army. The son of an artillery colonel, Ridgway [attended] West Point, where the yearbook described him as, 'Beyond doubt, the busiest man in the place.'

"Having just missed the fighting in France, Ridgway worked his way through a series of peacetime assignments, including stints in China, Nicaragua, and the Philippines. But in 1942 he was named commander of the 82nd Division, just before it was turned into one of the army's new elite airborne divisions. He made the most of it, leading the 82nd into Normandy on D-Day before moving on to a corps command. 'A kick-ass man,' one subordinate said of Ridgway, who became known as 'Tin-tits' among his men for the hand grenades prominently strapped to his chest at all times."

Excerpts from a reader's reaction to General Ridgway's 1967 book, The Korean War:


I am a retired US Army colonel. During my time on active duty, I was an instructor and department chair at the US Army War College. During that time we used incidents from the Korean War for the purpose of historical case study. So I believe I can comment on this book with some authority.

At the outset, however, I must confess that I am biased toward the author. I believe that Matthew B. Ridgway was the greatest general between Eisenhower and Creighton Abrams. I say that because he overcame what I believe is the greatest challenge that any commander could possibly face: taking command of a beaten, demoralized army and leading it to victory. In holding this opinion, I find myself in distinguished company. No less a luminary as General Omar Bradley described Ridgway's work turning the tide of the Korean War as "the greatest feat of personal leadership in the history of the Army."

Ridgway's battlefield achievements are well documented and need no embellishment here. What I find even more interesting is his contribution to the art of high-level joint and multinational command. Matthew B. Ridgway is the only man I know of to have commanded three of the unified commands created as a result of the National Security Act of 1947: the Caribbean Command, the Far East Command, and the European Command. He was single-handedly the man who made the Allied military command structure work during the Cold War, first on the battlefields of Korea and then in Europe. He re-oriented America's strategic thinking to deal with the new kind of threat posed by the Soviet Union and communist China, and contributed materially to the implementation of the resulting strategy. That is an unmatched record of achievement.

His book on the Korean War is a personal history. Those looking for detailed tactical or operational studies will have to look elsewhere. But the book is well worth reading to appreciate the character that was required to turn the Korean War around in the dark days following Chinese intervention. The best parts of the book deal with that.

Ridgway's solutions to the problems he faced were first and foremost practical. When he assumed command of the Eighth Army there were no bombastic speeches; no self-promoting public appearances; no laying of blame on his predecessor, his subordinates, or his superior. Ridgway called his corps commanders together and as a team they identified the problems and worked out solutions. For the most part, these solutions were just good soldiering -- better use of the terrain, more disciplined movements, more attention to intelligence analysis. But in two ways Ridgway did more than improve procedure -- he installed a new collective ethos in the entire Eighth Army. He made sure that everyone knew that the Army was going to attack the enemy, not run from him. And he made sure everyone knew what he was fighting for. Ridgway believed that one of the main reasons for poor morale was the fact that the soldiers did not understand this new form of war. So he issued a simply worded circular explaining in straightforward language what was at stake and why it was worth every person's sacrifice. The results were impressive.

Ridgway's voice in this book assures the reader on every page that he is sharing the thoughts of a man of character -- of self-discipline, loyalty, selfless service, modesty, and the willingness to accept responsibility and admit mistakes -- which Ridgway himself said is the "bedrock on which the whole edifice of leadership rests." His language is direct and lucid, suggesting that he was a man both cultivated and rugged. It is a good American book.

Another point I found interesting was Ridgway's discussion of African-American soldiers. Contrary to popular belief, President Truman did not desegregate the Army with a stroke of his pen in 1948. Many 'all-black' units deployed to Korea. Ridgway is the man who desegregated them, and as one would expect, he did it for both practical reasons (desegregation facilitated a more efficient use of military manpower) and for moral reasons (it was the right thing to do). He did not do it overnight, but rather in a methodical sequence, battalion by battalion, making sure that military discipline never suffered. [Representative Charles Rangel's 503rd Field Artillery Battalion, for example, was an 'all-black' unit well into 1951.] In the early days of the Korean War there was a lot of controversy over the alleged poor performance of all-black units like the 24th Infantry Regiment. After Ridgway's tour in command there was no more controversy because there were no more segregated units. Each soldier stood on an equal footing regardless of color.

Ridgway takes MacArthur to task for one thing and one thing only: insubordination. He very carefully recounts his respect and professional relationship with MacArthur, which began when MacArthur was superintendent of the Military Academy and Ridgway was Director of Athletics. He consciously does not second-guess any of MacArthur's operational decisions, even though some of them were disastrous. He demolishes the criticisms of the most vociferous MacArthur detractors -- especially the ones that portrayed the great general as a war-monger. All those make Ridgway's real critique of MacArthur more persuasive and more worthy of the reader's consideration. Ridgway argues that MacArthur's sin was in thinking that any theater commander, regardless of how well renowned and esteemed, could set strategic policy for the United States as a whole. MacArthur's public pronouncements that the President did not appreciate the true value of Asia in the nation's overall strategy undercut the President's overall authority, and that is what could not be tolerated.

"Ridgway retired from the Army in 1955, but thirteen years later he was part of a group advising President Lyndon B. Johnson to limit U.S. involvement in Vietnam. Greater troop strength and increased bombing could not lead to victory in Vietnam, the group argued, advising Johnson to seek a negotiated peace with North Vietnam.
"Johnson heeded the group's advice and announced in March, 1968, that he would de-escalate the war and begin negotiations. U.S. involvement in Vietnam did not end, however, because Richard Nixon won the presidency later that year with the promise of a 'secret plan' to end the war. The fighting would drag on for five more years before the Nixon Administration negotiated a U.S. withdrawal.
"Author David Halberstam sent Ridgway a copy of The Best and the Brightest, his definitive work on U.S. involvement in Vietnam, in which he had written on the flyleaf: 'For General Matthew Ridgway, the one hero of this book.'"


Here is a brief timeline of the Korean War. This documentary (about 40 minutes) is a good overview, with excellent maps. 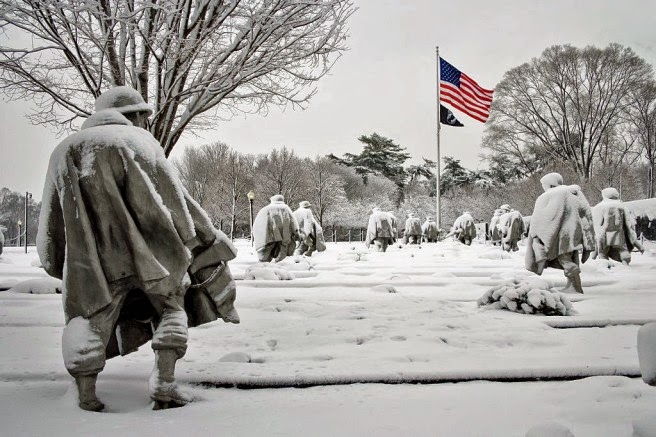 This is a picture taken at the Korean War Veterans Memorial (on the National Mall) which opened in the summer of 1995. Click here for a night-time photo.


Today, South Korea has more than 50 million people; North Korea is about half that number. Archaeologists believe the ancestors of today's Koreans came from Mongolia and Siberia. 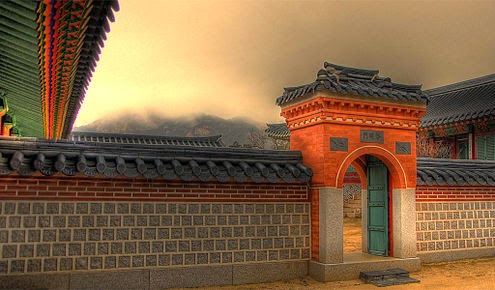