The 500th birthday of Teresa of Avila

"To have courage for whatever comes in life – everything lies in that."
(Saint Teresa) 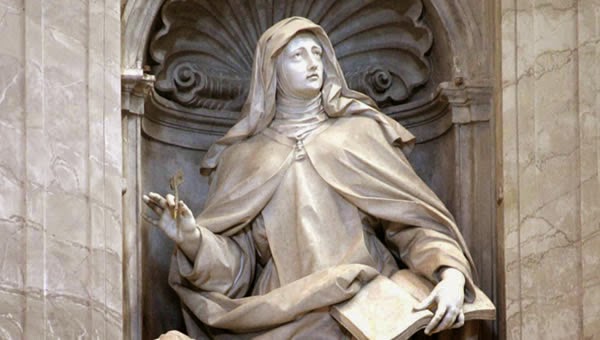 Excerpts from a column in the British Telegraph newspaper:


It is 500 years since the birth of St. Teresa of Avila. Her birthday is March 28, but the whole of 2015 is full of commemorative events.

There’s no doubting her influence. The previous Archbishop of Canterbury, Rowan Williams, wrote a book about her. He had read her autobiography as a teenager. Edith Stein, too, had read the autobiography, all one night in 1921. “When I had finished the book, I said to myself: This is the truth.” She was murdered by the Nazis in 1942 and is recognised as a martyr.

St Teresa is approachable, down to earth, humorous. Friendship was one of her talents. In 1970 she was declared a Doctor of the Church. But what is she meant to teach us?
I think it is something particular about prayer. But it has little to do with her visions... or the locutions she heard in her mind’s ear. I don’t doubt them, and I’d be surprised if most people haven’t had something of the sort at some time. But she declared that they were of no importance, and from the first distrusted them...

One [book on spirituality] that changed her life, when she was 25, had the title of The Third Spiritual Alphabet, by Francisco de Osuna.

She took from him the idea that anyone can undertake mental prayer, contemplative prayer, not just saying prayers verbally. Specifically, Francisco explains that the teacher of prayer is Jesus Christ. No earthly teachers can really tell another how to pray. All they can advise is to be constant in devoting a given time to prayer.

Teresa was very taken with the knowledge that God is present inside human beings. She spoke of “keeping your eyes” on Jesus, who was crucified. She did not mean that people should limit themselves to imagining what Jesus might look like. It was a question of presence.

I had forgotten, till I came across it again while writing this, that the Catechism of the Catholic Church, in discussing prayer, quotes St Teresa: “Contemplative prayer (oración mental) in my opinion is nothing else than a close sharing between friends; it means taking time frequently to be alone with him who we know loves us.” So it is a two-way process.

Indeed, her conviction that distractions in prayer were to be ignored, and made no difference, was supported by her awareness that the presence of God in prayer was real, not just a subjective state of mind to be captured. The activity of prayer was that of God in the soul more than that of the Christian sitting in his presence...

Teresa, for years bereft of discernible thoughts during her daily hours of prayer, knew that God’s work in the soul was not always apparent to the imagination, or even the intellect. If at all, it could be seen by the way the praying person embraced the will of God in her life.

Teresa’s way of prayer was not a sort of mystical Buddhism. What made it different was her reliance on the humanity of Jesus, the fact of his having become a man and retained the human flesh to which human beings are so accustomed in their own lives that they either overlook it or mistake it for an obstacle.

This incarnational spirituality brought Teresa’s life of prayer into her daily life of pots and pans and outwitting the bureaucratic or malign characters who tried to squash her energies in returning to the essential spirit of the Carmelite order she reformed.

A prayer written by Teresa:

"Let nothing disturb you,
Let nothing frighten you,
All things are passing:
God never changes.
Patience obtains all things.
He who has God
Finds he lacks nothing;
God alone suffices."


"Teresa had a definite goal in mind when she began the reforms: 'All my longing was and still is that since He [Jesus Christ] has so many enemies and so few friends that these few friends be good ones. As a result I resolved to do the little that was in my power; that is, to follow the evangelical counsels [poverty, chastity, and obedience] as perfectly as I could and strive that these few persons who live here do the same.'

"These reformed nuns were called Discalced Carmelites because they wore sandals. In Teresa's time, there were various reform movements happening within religious orders. This was a response to the Protestant Reformation occurring in Europe. All the reformed orders wore sandals as a sign of their reformation and were thus called 'Discalced,' from the Spanish descalzo, which means 'barefooted.'

"The Discalced Carmelite nuns wore habits made of cheap material... They returned to the perpetual abstinence from meat and the six month fast (from the Feast of the Exaltation of the Cross on Sept 14th to Easter) which were required by the Rule. They had two hours of meditation every day, laid heavy emphasis on poverty, and kept silence throughout the day. All these monastic practices were meant to provide an atmosphere of continual prayer and penance. These in turn were meant to lead the Sisters to fraternal charity and service: love of God and neighbor -- the sum of perfection. In her lifetime, Teresa founded seventeen monasteries of nuns."