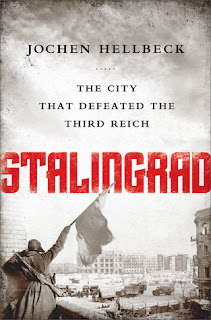 The Battle of Stalingrad began on the 23rd of August 1942, and lasted roughly five months. It may well be the bloodiest struggle in all of recorded history. 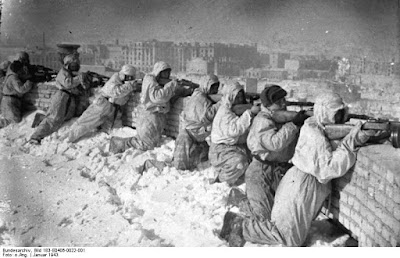 Here are excerpts from a review that appeared in the Cleveland newspaper:

Yorktown and Gettysburg rank highest among American martial epics of valor and victory. Most Brits would probably choose the World War II aerial Battle of Britain as their "finest hour." To the French, Verdun – with its defiant cry, "they shall not pass" – represents a national Calvary of agony and endurance in World War I.

For the Russian people, even more deeply engraved on the national psyche, it's Stalingrad, "the most ferocious and lethal battle in human history." This titanic five-month encounter, with roughly a million casualties – dead, wounded, captured or missing – on each side, culminated in a shattering defeat of the Nazi invaders by the Soviets.

Military historians universally recognize it as the turning point of the Second World War, or, as it's known in Russia, the Great Patriotic War.

In Stalingrad: The City That Defeated the Third Reich, Jochen Hellbeck assembles what amounts to an ... all-encompassing chronicle, of this pivotal contest. The book, previously published to great acclaim in Germany, centers around a remarkable collection of oral histories gathered by Soviet researchers during, and in the immediate aftermath of, the battle in 1942-43.

This documentary trove languished in the basement of a Moscow archive until Hellbeck, a German-born historian who teaches at Rutgers University, came upon it in 2008.

Comprising 215 eyewitness accounts – thousands of typescript pages – from participants ranging from generals to privates, as well as civilians, these interviews paint, writes Hellbeck, a "multifaceted picture" of incredible bravery and fortitude. Due, however, to their "candor and complexity," they were censored during the war. 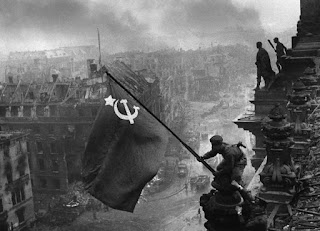 Afterward, the scholar who compiled them fell into political disfavor, and his project was buried and forgotten for more than six decades.

Hellbeck's signal achievement lies in how he deploys and supplements his sources. He begins with an overview of the battle, placing it in the context of both the war and Soviet society. He reminds us that the U.S.S.R. did more than any country to defeat the Nazis and paid a much higher price.

The Red Army inflicted about 75 percent of all the casualties suffered by the Wehrmacht. Roughly 27 million Soviet citizens died – around 15 percent of Russia's prewar population. In contrast, American World War II deaths number just over 400,000...

[W]e get multiple angles of vision on events such as the capture of the overall German commander at Stalingrad or a costly, failed assault on a Nazi-held position. Hellbeck aptly likens the effect to "a chorus of soldierly and civilian voices."

The book also contains gripping, stand-alone accounts. Nurse Vera Gurova was among the nearly 1 million women who served in the Red Army. She and her sisters elicited this from her commander: "They can't do what a man can do physically, but they outdo men in terms of courage."

Sniper Vasily Zaytsev killed 242 Germans and was honored as a Hero of the Soviet Union. Explaining his remorseless hatred for the enemy, he commented to his interviewer: "You see girls hanging from the trees. Does that get to you?"


Rounding out Stalingrad are many photos, transcripts of German prisoner interrogations, excerpts from the diary of a dead German soldier and a brief coda that describes the battle's aftermath and the unhappy fate of the band of researchers who tried to capture the Stalingrad experience in full.

Besides illuminating the human side of this colossal battle, Hellbeck also revises the common Western image of the Red Army as a horde driven forward "by pistol-waving political officers."

To be sure, savage penalties were meted out to perceived shirkers. One general casually remarked that he personally "shot the commander and commissar of one regiment, and a short while later" executed "two brigade commanders" for their failings.

Nevertheless, Hellbeck's findings compellingly suggest that it wasn't just, or even mostly, coercion that motivated Soviet troops. Rather, it was a combination of effective "political conditioning" and genuine patriotism that inspired them.

Hellbeck concludes with a visit to the giant memorial in Volgograd, the name that replaced Stalingrad in 1961 as part of that era's de-Stalinization. Words penned about the battle and its heroes by the renowned Soviet novelist Vasily Grossman are engraved on an exterior wall: "An iron wind struck them in the face, yet they kept moving forward. . . . Are these mortals?"

Inscribed inside the monument is this response: "Yes, we were mortal and few of us survived, but we all discharged our patriotic duty to our sacred Motherland." 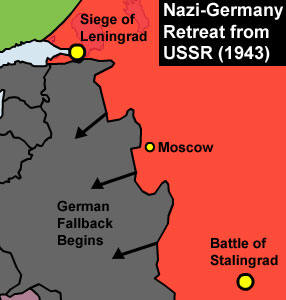 
"It is important to keep Soviet history in mind when thinking about morale at Stalingrad. During the Russian Civil War, Joseph Stalin led communist forces in defending the city of Tsaritsyn against the White Army. The city was renamed Stalingrad in 1925 to recognize this achievement. Soviet soldiers who fought at Stalingrad did not see Stalin as a ruthless dictator responsible for the deaths of millions; most, according to Hellbeck, were proud to be fighting in the same city that he had defended."

UPDATE: While all this was going on, life in Leningrad was also hell as residents were enduring an almost 900-day siege. It was lifted in late January of 1944.

Some of the experiences of a teenage girl who survived.