The Physical Ecology, Communal Loyalties, and Geopolitics of Nigeria 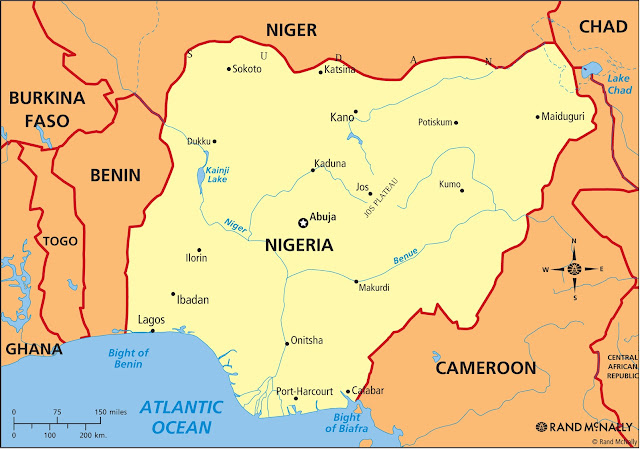 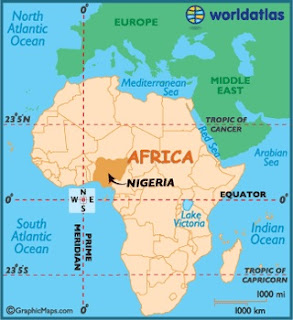 Nigeria is located in western Africa with its Atlantic coast oriented south just four degrees north of the Equator. At roughly 356,000 square miles in size, Nigeria is about twice the size of California. Nigeria's two largest rivers, the Niger and the Benue, converge at the Niger Delta and flow together into the Atlantic Ocean from the north. This southern part of Nigeria is also home to a tropical rainforest climate. In the north, however, Nigeria borders the dry Sahel, a semi-arid region that runs along the Sahara's south. Rugged highlands in Nigeria's east form a geographic border between Nigeria and Cameroon. In the far northeast is Lake Chad (which is also bordered by three other nations: Chad, Cameroon, and Niger). Nigeria is a resource-rich nation with deposits of tin, iron ore, coal, bauxite, gold, tantalite, limestone, niobium, lead, zinc, and natural gas. Almost 80% of Nigeria's land is arable. Despite this, Nigeria's agriculture has been overlooked by government development in favor of another vital natural resource: oil. Nigeria is the world's 12th largest producer of oil and is ranked 10th in overall proven reserves.

Nigeria is the most populous nation in Africa. At nearly 174 million people, it accounts for about one-sixth of the continent's population and one-fifth of Africa's sub-Saharan population. Nigeria's focus on oil production over agriculture has lead to food shortages as much of its arable land is either unused or poorly farmed without modern equipment. Although Nigeria is divided among 250 ethnic groups, the largest three comprise some 68% of the population. The largest ethnic group is the Islamic Hausa-Fulani in the north at 29%, followed by the Yoruba (21%) and the Igbo (18%). Despite the fact that over 500 languages are spoken in Nigeria, the British left behind their unifying national language after leaving Nigeria in 1960. Christianity and Islam comprise the two largest religious groups in Nigeria with a religious civilizational fault line dividing the Islamic north and the Christian south. Although Islam has had a long presence in Nigeria, Christianity is now only slightly behind Islam demographically in Nigeria.

Nigeria is bordered by Christian-majority Benin to the west, Islamic Niger to the north, Islamic-majority Chad to the northeast, and Christian Cameroon to the east, with access to the Atlantic in the south. Despite the large size of Lagos (9 million) on the coast, Nigeria made Abuja its capital both due to its central location and also to the area's perceived neutrality between Nigeria's various communal loyalties. Since its independence in 1960, Nigeria has placed much emphasis on the African subcontinent, opposing apartheid in South Africa, sending military into the Congo, and promoting self-government among former European colonies. It's military (200,000 men) has been involved in peace-keeping efforts in Liberia, Sierra Leone, and Ivory Coast. Nigeria remains non-aligned yet formed strong ties to Israel in the 1960s. Radical Islam is perhaps Nigeria's gravest military threat. The terrorist group Boko Haram operates in Nigeria's northeast, but is also found within Niger, Chad, and Cameroon, making its defeat difficult for any one nation. Boko Haram has killed some 17,000 since 2009 and is perhaps known most for its kidnapping of 276 schoolgirls in 2014.

Stratfor - short for Strategic Forecasting, Inc. - is a private global intelligence company that offers geopolitical insight into the interplay of nations. Stratfor has developed an excellent series of short (~2-4 minute) videos which provide the viewer with a specific nation, along with its basic history, geography, culture, and geopolitical allies and adversaries. In the following video, they present the geographic challenges facing Nigeria.


For more information on Nigeria, visit its page on the CIA World Fact Book along with our post from 2011. The April 2015 election of Muslim Muhammend Buhari was a set back for Boko Haram - here were our thoughts at the time.
Posted by Andrew Lynch at 9:00 AM