The Nashville Statement: Culture and Taboos 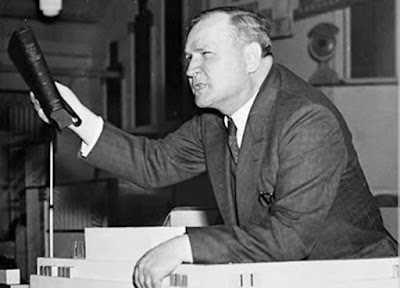 Early in the year of 1968 a preacher died in Greenville, South Carolina. His name was Bob Jones Sr.

He was one of those who argued that to oppose segregation was to oppose the Lord of Heaven and earth.

This article outlines some of the ups and downs of his relationship with Billy Graham -- who, beginning in 1953 at Chattanooga, made sure all his rallies were integrated.


[Another native son of Greenville is Jesse Jackson. As are two men who would have a big impact on the city of Minneapolis: basketball star Kevin Garnett and Calvinist Baptist pastor John Piper].


Liberals have been quite successful in equating old-time segregationists with today's defenders of traditional Christian teaching on marriage and gender. How does a culture stigmatize certain behaviors?

Doc Pence: Confusing the admirable goal of a color-blind society with the suicidal project of eradicating gender differences is the great cultural Houdini act of our generation.
It could only happen by losing our national reference to the sacred, and inverting our previous honor and shame code. Long before something is ruled against the law, it has to be made unacceptable in Proper Company. Using God's name and using the 'f-word' were socially stigmatized in my living memory. This is a crucial lesson for all interested in forming culture. Drinking while driving, using physical force in disciplining children, smoking, driving a small child without a car-seat are all behaviors which are becoming stigmatized in America today. Abortion is maternal health. We let that go -- while becoming emotionally unglued if we see a moving auto with a kid in his mom's arms instead of a car-seat.
One of the deepest drives in humans is to be socially accepted. This status seeking is part of being a social being. That is why the emotion of being shamed is so dreaded, and the emotion associated with public honor is so pursued. Whenever opponents of homosexual marriage say "we are against gay marriage, but we deeply respect homosexuals and gays," they've lost the shame/honor battle!
What is the biggest yearly public demonstration in Minneapolis? It is called The Gay Pride parade. What is forbidden is any use of speech that derides those who celebrate degeneration: fruits, fags, and fairies are out. Those are forbidden stigmatizing words, unlike hurling fascist on college campuses at anyone you disagree with.
Less than 20 years ago ('Lawrence v. Texas') the Supreme Court denied states the police power of criminalizing sodomy. Two years ago ('Obergefell v. Hodges') the Supreme Court denied states the ability to conform their state laws to the heterosexual nature of marriage. Those revolutions in our law code could only occur because in books, movies, television shows, and the common language of the educational system and urban culture what had been shamed and scoffed at was smiled upon, then admired, and finally mandated.

I can imagine a situation in another decade or so: Catholic believers treated as hateful extremists by many Americans -- with frequent disruptions of Sunday masses by screaming protesters inside the sanctuaries. Will it be possible for progressives to marginalize Catholics?

Doc Pence: You are describing many situations which have already happened in Latin America and Canada, as well as the antics of a group called Pussy Riot in Russia. I would rather have it out in the open, like when 'rainbow homosexuals' in the U.S. tried to disrupt the Pentecost Eucharist in so many dioceses a decade ago. There are significant groups of Christians in America who have enough of a fighting tradition that if the screamers come to us, we will protect our holy sanctuaries.
Treating homosexuality as a fundamental spiritual and psychological disorder must be tabooed if the Pride Days are to continue. This is a battle of taboos. Traditional Christians from Moscow to Nashville are resisting the new taboo. We are reasserting the ancient sacred goods. The all-male Catholic clergy is deeply divided, no matter how clear the Catechism is. The homosexual wing of the clergy is much more aggressive in using shame against their critics. They have the secular media as a willing bullhorn. Before Catholic masses are disrupted, we need Catholic priests and bishops to identify and face the clerical homosexual problem. When the disruptions happen it will be necessary to physically stop the outside agitators while identifying by name the inside Quislings. Both groups were involved in the de-sacralization attempts of the Pentecost Rainbow Sash movement. Both were targeted by the Ushers of the Eucharist who showed a defense in 2006. (Correcting the editor -- it was in St Paul, not Milwaukee.)

The speed with which our culture seemed to revert in destigmatizing homosexuality and abortion is really quite stunning. Are there any peculiar reasons for the rapidity of the inversion?

Three avenues I would explore: 1) The emotional hijacking of the moral capital of the interracial civil rights movement. 2) The use of human resource departments in large corporations and educational institutions to punish non-conformity with job loss. 3) The revolutionary role Jewish, Protestant, and Catholic clergy played in the de-sacralization of sexuality.
Clergymen were a lot more prominent in the cultural sexual revolution than construction workers. I heard it once said, "The rabbis quit believing in God. The Protestants never believed in the all-male apostolic roots of the clergy or the special feminine truth of the Blessed Virgin Mother. And the Catholics -- they had an all-male priesthood, but it was overrun in the '50s and '60s by homosexuals and cowards fleeing conscription in the military during the Korean and Vietnam wars." Forty years before Bruce Jenner was given a sports courage award for wearing a dress, American females broke millennia of tradition and were officially garbed as Jewish rabbis (1972), Anglican priests (1974) and Presbyterian pastors (1956). Their liturgical cross-dressing in the sacred spaces of public worship became the new normal in America's synagogues and churches. The cultural revolution in America that desacralized the marriage act and denigrated protective sex roles was hatched by Marxists and adolescents but it was spread and enforced by synagogues and churches.


Pastor Piper was one of the leaders behind the recent Nashville Statement. Two people who were quick to denounce it were the mayor of Nashville, and Italian priest Antonio Spadaro who edits the influential Jesuit journal 'La Civiltà Cattolica.' What was your impression when you read it?

I thought the document was the best of its kind. It was a symphony to theological ecology.  So clear, so unapologetic about the sacred bonds of spiritual and physical life. The everlasting trinitarian God who is creator; man and woman made in His communal image and likeness.  That is how the late great Catholic writer and street-preacher Frank Sheed (d. 1982) used to introduce theology -- the realization of God as the basis of sanity.
The sexual leftists of the Democratic party represented by the Nashville mayor, and the sexual predators of Catholic male religious orders represented by Jesuit Father Spadaro were out in full force because this statement is not stuttering or apologizing. This is the kind of public utterance that cannot be allowed if the new stigma is to be enforced. I would not term the pastors who signed the Nashville Statement as courageous, because courage is what you need when you stand up to Nazis and Communists. We are fighting lighter-weights such as Barney Frank and Nancy Pelosi. When the stigma is broken, we will be amazed how soft that impregnable PC Tyranny turned out to be.