Certainly one of the most famous Catholic intellectuals during the JFK era was Michael Harrington, propelled by his book The Other America: Poverty in the United States. He wrote: "If my interpretation is bleak and grim, and even if it overstates the case slightly, that is intentional. My moral point of departure is a sense of outrage."

From an Irish family in St. Louis, he received a first-rate Jesuit education. For several years he was editor of the soup-kitchen newspaper, the 'Catholic Worker.' He must have exasperated Dorothy Day more than a little, as his socialist interests eclipsed his attachment to Christ and the Church.

By the time of the Vietnam War protests, Harrington "became the elder most trusted by the students who led the New Left."


Deacon Toner (over at The Catholic Thing) recently reminded us that Mr. Harrington became an atheist in the late 1950s, and remained one until his death.

The question that springs to mind: why did all the hype of the Second Vatican Council have no effect on his blindness to the duty of loving and worshiping God? The Church went through massive upheaval, and the only reaction from someone with the soul of a Harrington was a harumph?!

A far greater tragedy in the aftermath of the Council -- with millions praying for a true Holy Spirit renewal -- was that the number of unrepentant priestly predators should shoot upwards for the heavens.
[Take a look at this 2016 article about Teddy McCarrick receiving yet another award from Cardinals 'Hear Nothing,' 'See Nothing,' and 'Say Nothing.']

What was the sacred utterance that Americans began hearing so often in the 1960s? "Do the bidding of your own heart."

Monks such as Thomas Merton -- or the large number of Benedictines at Saint John's Abbey in Collegeville, Minnesota -- completely failed in providing any ballast against the raging winds of the Age of Aquarius. The famous Kentucky Trappist should have let Rembert Weakland do the Buddhist dialogues in Thailand; and, instead, gone on pilgrimage to the austere Greek Orthodox monasteries of Mount Athos.

Many Catholics now seem resigned to taking the long view: that the fruit of Vatican II won't appear for a century or two.


"To begin with, I turn back time. I reverse it to that quaint period, the thirties, when the huge middle class of America was matriculating in a school for the blind. Their eyes had failed them, or they had failed their eyes, and so they were having their fingers pressed forcibly down on the fiery Braille alphabet of a dissolving economy." 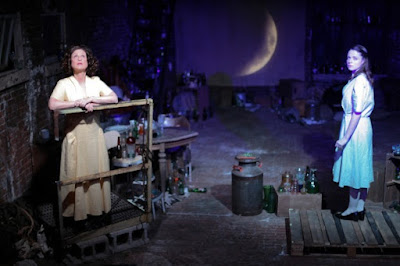 Here's a short clip of a discussion between Mr. Harrington and professor Milton Friedman.