The widowed mother of Edith Stein


Tomorrow is the feast day of Edith Stein (1891-1942), the German philosopher who was canonized by John Paul II.

Born on Yom Kippur, she was the youngest of a large faithful Jewish family. Edith was only two years old when her father died. Her mother became even more devout.

Edith entered her teens, and her intellectual wrestling caused her to reject God. But, eventually, "her spiritual search culminated over the summer of 1921 when, staying at the house of a friend, she happened to read the classic Autobiography of St Teresa of Avila. Having finished it in one night, she said 'This is the Truth.' Her intellect could no longer withstand the Spanish mystic’s vigorous description of her friendship with Christ."

She was baptized on January 1, 1922 -- on the Feast of the Circumcision of Jesus, "when Jesus entered into the covenant of Abraham."

"When she told her mother of her momentous step, the effect was shattering. She was her mother’s favorite child and they were exceptionally close. Frau Stein, 'the strong, capable woman who had never allowed emotion to overcome her…silently bowed her head and wept. Edith mingled her tears with those of her mother; for both women suffered cruelly. There was then re-enacted in their souls the old history of the incomprehension of the Synagogue who believed her faith in the One God betrayed by the Incarnation…' "

"By the end of her life, Frau Stein had become reconciled to her beloved daughter’s vocation to the Carmelite nuns. Indeed, Sister Teresa Benedicta relates when she came to renew her vows on 14 September 1936, she distinctly felt her mother’s presence. A telegram from Breslau the same day told her that the hour of the renewal of the vows had been the hour of her mother’s death." 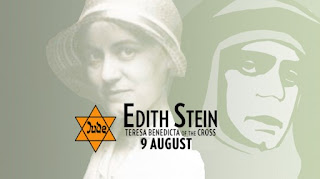