This article was originally posted in November 2014, around 100 years after World War I began. November 11 of this year marks the 100th anniversary of the war's armistice. As the maps below reveal, the great prewar religious land empires of Catholic Austria-Hungary, the Orthodox Russian Empire, and the Sunni Muslim Ottoman Empire did not survive the war's conclusion. Read on to learn more about the downfall of these major religious land empires along with the other changes to Europe's map following the war.

The map above depicts the European map during the years of World War I. Below is a map which looks strikingly different. It is the redrawn map of Europe following the defeat of the Central Powers in 1918.

The most significant changes between the two maps may be found in the Balkans and around the Baltic Sea. The Austro-Hungarian Empire, defeated in war, was broken up and the many nations which were conglomerated within her were given the ability to rule themselves as governing states. In the decades ahead, however, Yugoslavia and Czechoslovakia would themselves require more separation as the nations within them had yet to achieve statehood. In the northeast, Latvia, Lithuania, and Estonia appeared out of what was once a part of the Russian Empire - which itself had now fallen to militant atheists under Lenin's communist USSR. Though it had a long history of statehood, Poland re-appeared as yet another new nation on the post Great War map.

Other areas had changed to a lesser degree. Germany was now cut off from East Prussia due to a land corridor of the newly formed Poland which gave it access to the sea. Italy had shifted slightly, gaining further territory to the northeast in Tyrolia. France, victorious in war, regained the provinces of Alsace and Lorraine which it had lost to the Germans following a stunning defeat in the Franco-Prussian War (indeed Germany had hoped its 1914 campaign in France would have been as successful as the one in 1870). 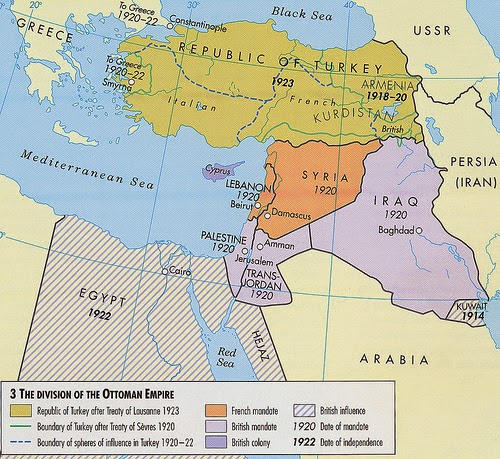 Addenda:
World War One and the Armistice  100 years later by Adam Hochschild

The Twentieth Century-The Triumph of Religion and Nations amidst the Fall of Empires. AOA