PENTECOST: The Spirit fills the Apostles who draw the Jews into the Church who draws humanity into the Trinity.

"The Church which, already conceived, came forth from the side of the second Adam in His sleep on the Cross, first showed herself before the eyes of men on the great day of Pentecost."      (Pope Leo XIII, 1897)

St. Augustine said the coming of the Holy Spirit – exactly ten days after the 40 days of Christ’s risen presence – signifies that the Spirit fulfills the Law (Ten Commandments) in Christ. The obligatory presence of adult males in Jerusalem for the Jewish Pentecost crowded the city square with men speaking the different languages of the nations, but sharing the unified liturgical memory of Israel. 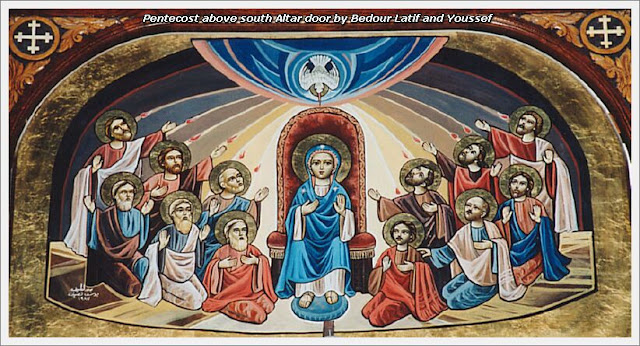 The Holy Spirit is the Soul of the Church, the Giver of Life, and the great binder of communions. He animates matter with life, draws the living to the Church, and indelibly configures the baptized to the Body of Christ. He was a co-conspirator with Christ throughout his life on earth, as they plotted to confound Satan in the desert and build the Kingdom of God on earth. The presence of the Spirit was activated on Pentecost, as it is sacramentally for us in Confirmation. That distinct Catholic sacrament of initiation “confirms in the Spirit” the soul of the Christian to the physical liturgical presence of the Bishop as the local head of the Apostolic Church. Like baptism, confirmation orders the soul with a permanent seal of character in ecclesial communion with Christ. After confirmation there is no such thing as a vocation to the single life. Baptism in one sense, and confirmation in a deeper way, calls each of us out of the single life into a new communal identity as a practicing Catholic.

In the days before Pentecost, the Twelve had been corporately restored by the election of Matthias (the opening chapter of the Book of Acts.) On Pentecost the Spirit filled the apostles, and their shouts of praise were heard in the tongues of many nations (second chapter of Acts.) An early bishop, when questioned why he couldn't talk so foreigners could understand, replied that by baptizing men of  many nations and languages, it is the Church now through her converts who speaks in tongues understood by all the nations.

It was Peter – surrounded by his apostolic brethren constituting the restored twelve tribes of Israel – who formally addressed the “Men of Judea” gathered in their holy city. He announced that the Messiah promised to them as Jews had come to deliver them from their enemies, but had been killed by those He came to save. He offered them repentance and incorporation in the new Kingdom under Christ the Lord. The universality of the Church’s Kingdom message to the nations, the fact that the Messiah was not another human prophet but the God of nature become man, and the mystery that God is One in Three Persons: these three truths became the reflections of Pentecost Sunday sermons down through the ages. Like all of us, the 3,000 baptized Jews of that day did not fully appreciate the extent of the miraculous events that engulfed them. The developing realization that this coming of the Spirit was the action of a distinct Person of a triune God gave a name and special time for reflection to the octave Sunday of Pentecost: Trinity Sunday.