August 22: QUEENSHIP OF MARY - Ruling from the Inside

Keeping sacred time with the Church means that the central events are always prepared for by a season -- Lent for Easter and Advent for Christmas. It also means that solemn feast days are never allowed to come and go with one rising and setting of the Sun. The great solemnities are celebrated as Octaves. Eight days has an ancient meaning as a unit of time signifying a new creation. So, eight days after we celebrated the Assumption of Our Lady into Heaven... we are still contemplating her place in her new home as we celebrate her Queenship. A man who desires to love God our Father as a son and build brotherhood in the priesthood, city, and nation can never spend too much time contemplating the perfection of the feminine in Our Lady. These sacral sexual roles depend on each other and are clarified by contrast, complement, and communal context.

Our Lady lived the Trinitarian roles of the woman. She is the daughter of the Father, the Spouse of the Holy Spirit, and the Mother of Jesus. She humbly obeyed her Father. For all His life, she kept hold of her Son wrapped in swaddling at Bethlehem and draped in burial clothes at Gethsemane. Her perfect virginity established a perpetual barrier to the evil of sin while making her permeable to her Spouse: the Holy Spirit. She was "guarded by the angels, prefigured by the patriarchs, and promised by the prophets."

Feminism is the reigning atheist ideology of our day set against the person of Our Lady, as surely as the Dragon was set against her in Revelation. Wherever the confusing mist of feminism infiltrates the mind, statues of our Lady are put in the closet. Wherever feminist language is spoken, her songs are left unsung. Wherever she is photo-shopped into a picture of the Last Supper, the picture of her suffering heart is pulled from the wall as too gruesome. The "feminist implant" of atheist thinking has replaced the armed atheism of Marxism. This is a more devastating lie. Seven demons have filled the house that was swept clear of one. Wherever feminism reigns, Our Lady is dethroned.

It is hard for gentlemen to oppose even counterfeit femininity. But we must reject this anti-Marian heresy for the sake of women around the world. The white feminists of the West squandered the moral capital of the Christian interracial movement by twisting the just claims to be colorblind with the less virtuous desire to be sexually confused. The face-to-face sisterhood of Mary visiting Elizabeth was always too small a love for them. Thus they conjure the delusion that the coalition of selfish white female careerists in university, church, and government jobs is a worldwide sisterhood rivaling the masculine protective fraternity of priesthood and nations. Those who kill patriarchy multiply the widows and orphans, and at some point the dark skin of those victims will scream for justice against this racist trickery. Mary did not seek to be an apostle. She is a Queen. As Pope Francis said about women cardinals: "I don’t know where this idea sprang from. Women in the Church must be valued, not ‘clericalised.’ Whoever thinks of women as cardinals suffers a bit from clericalism."

It is an ancient tradition that after Christ’s death, the apostles hid Mary. The Roman soldiers and Jewish high priests could never lay a hand on her. Had they tried, the sword of Peter would not have stayed sheathed. Twenty centuries later the Church with her feast days, prayers, and contemplations tells the whole world who our Lady is and where she is. She is safe now, so the Apostolic Church can publicly proclaim what John and the apostles once held in secret, and the Catholic faithful affirmed in the glorious mysteries of the rosary. The Dragon and the violent world were too dominant for the apostles to speak too loudly and too clearly of her too soon. For it is always an imprudent risk to reveal a feminine beauty in an evil world if one cannot protect her from attack. But, now, let us rejoice and be glad.

Look up on this feast day and see the blue sky with white clouds in the daytime sun. Those are reflections of the Queen’s garments in Heaven. The Virgin Mother is safe up there in the midst of the Trinity, so the Church can now illuminate the world by explaining the nature of her rule. She is queen of the interior life. She rules in the vast expanse of the inner chambers opened by prayer and contemplation. The feminine rules from the inside. There is amidst the Trinity of masculine persons a feminine interior -- a whole, a beauty that is never spoken but is integral to God. That timeless feminine reality precedes Mary who is a creature. Mary is not the fourth person of the Trinity, nor is she the incarnation of the Holy Spirit. She is queen because she humbled herself before the Father. The whole world is at her feet because she opened a virgin’s heart to the wind of the Holy Spirit. In conforming herself to the will of the Father, she exercised the interior freedom of a soul in love. When men follow our mother in such acts of interior surrender we shall regain our stature as lords of creation. Only then will we fulfill the original mission of our species: to rule the Earth in his Name. 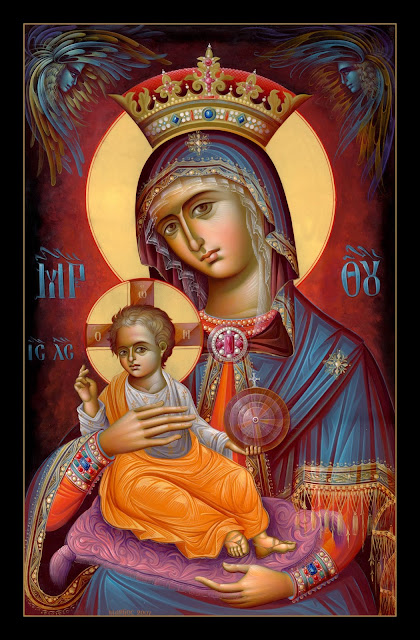 UPDATE: See the Assumption of Mary. And our review of Hildebrand’s classic study of purity and virginity in Catholic culture.
Posted by Andrew Lynch at 8:30 AM