SEPTEMBER 29: FEAST OF THE ARCHANGELS


On this feast of Saints Michael, Gabriel, and Raphael -- some thoughts of Doc Pence on our angelic partners.  He begins with an anecdote:

About a year ago when I was arguing with a theology professor at St. John’s in Collegeville MN about women priests and homosexuality -- it struck me.  I asked him, "Do you believe there was a first man and woman, Adam and Eve?”  He said, "No, science has proven that wrong."  I asked, "Do you believe there is a wicked angel, Lucifer, who is the devil; a real being, dedicated to evil and not redeemable?”  He said, "No, there is definitely evil in the world and in all of us but not an actual powerful spiritual evil being."  "Well, how about angels in general -- another order of beings -- purely spiritual who can know and love and who are actors in the domain of nature and history?"  I asked.  He hedged and hemmed and asked to be excused.

I told myself, "I have been in the wrong discussion -- the problem is a lot of these guys don't have the cast of characters or central events of the Divine Drama in place.”

What is priesthood, and who cares if it is all-male, if there is no Satan and the story of Salvation History is just a hodgepodge of Semitic texts?  I haven't gotten into arguments over women priests for a long time because I find those who favor them have a much bigger deficit that has to be first addressed.

Today we give thanks for the angels -- pure spirits organized in hierarchical orders -- our great elevated partners in the Divine Drama. 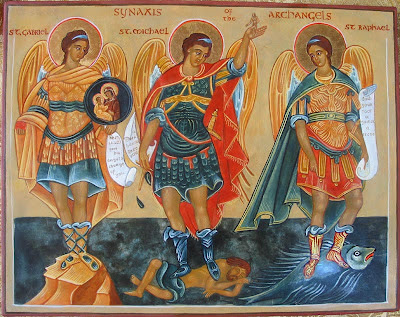 God is an eternal Being outside of time: one Divine nature in three Persons. The angels are pure spirits. They have the two characteristics of spiritual beings: they can know and love.

The material world is mineral, vegetative, and animal. The minerals (atoms, chemical elements and molecules, and all non-living matter) do not have souls.  The vegetative and animal beings are living, and thus have souls. Souls are the central unifying principles of living things. All physical living beings have souls, but their souls are different. The souls of bacteria, fungi, plants, and animals die with the creature. Spiritual souls are immortal and rational. We don’t talk about an angel’s soul because a soul is a form in a material being.

Living Beings have interiority and agency and hierarchy. Living things act for themselves in a way that rusting iron and eroding rocks don’t (agency). All living things have an inside and an outside, from cell structure to internal body cavities to the interior spiritual life of man (interiority). All life comes from life, and exists within a structured sacral order (hierarchy).

Man is the one material being with a spiritual soul -- he can know and love. Thomas Aquinas thought one could logically argue to prove the existence of angels. He said there needs to be a created being which is spiritual but is not made of matter. (This balances the material world in which there is matter without a soul, material creatures with a “material soul,” and material beings with a spiritual soul.) Angels perfect the universe because they are created immaterial beings, which are spiritual. They too can know and love.

Angels know directly (they intuit), and desire and decide instantaneously. Their decisions are irrevocable. Angels use matter for appearances but do not become living material beings. Each angel is his own species. Angels are organized into hierarchical orders: some worshiping, some in charge of movements in nature, and some personally involved in the lives of men and nations.

When we contemplate the angels this brings us in closer contact with the hierarchical nature of the cosmos, the reality of Satan, the heroism of Michael, the ongoing active dialogue between the spiritual world and human development. We are part of a cosmic drama that started long before we got here. In this drama, the sons of Adam are given a major participatory role in the restoration of Justice after Satan’s rebellion. Man is part of a cosmological reality and so are the angels. Man cannot fully understand his role here without a robust and clarified view of the Angels in the Drama.


UPDATE: In both Jewish and Christian tradition, every nation has been assigned a guardian angel through which Divine Providence works out His purposes in history. While Pope Francis suggested that Catholic discussion be less preoccupied with homosexuality, abortion, and contraception, he has continually emphasized the present-day reality of the evil angel Lucifer.

St. Michael, St, Raphael, and St. Gabriel: pray for us.

Email ThisBlogThis!Share to TwitterShare to FacebookShare to Pinterest
Labels: Adam and the Original Mission of Man, Sacred Time