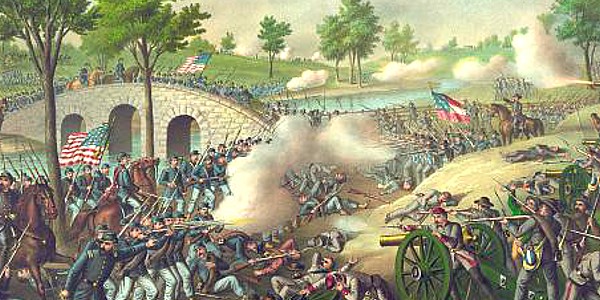 September 17, 2017 -  just shy of one week after 9/11 - marks the 157th anniversary of the bloodiest day in American history. It was on this day in 1862 that General Robert E. Lee's first invasion of the north was turned back, Confederate recognition by Britain and France was thwarted, and the Emancipation Proclamation was ensured. The cost of this was around 23,000 American casualties, almost 4,000 of which were killed in combat. In comparison, 9/11 witnessed the deaths of 2,996 while some 80,000 Russian and French casualties resulted from the single day Battle of Borodino in 1812.

The Battle of Antietam followed a string of Confederate victories led by the newly appointed General Lee beginning in late June of 1862. In a period of one week, Lee won a series of stunning battles that drove the Union Army back from the gates of Richmond. In late August, Lee followed up his opening victories with the Battle of Second Bull Run, located south of Washington DC. In another decisive win, Lee almost outflanked and destroyed the Union Army as it withdrew over Bull Run.

With these victories in hand, Lee decided it was time to take the fight north.

As he would do in the Gettysburg campaign, Lee marched his army nearer to the mountains in northwest Virginia, using them as a screen to cover his forces moving north. Believing the Union commander, General McClellan, to be a slow and cautious leader, Lee took the risk of dividing his forces on the march. While Lee's estimation of McClellan was accurate, Lee did not know that an order containing his marching plans was accidentally discovered by Union forces. With Lee's marching orders in hand, there was little stopping McClellan from attacking the Confederate army piecemeal, and thus bring an end to the war.

McClellan, however, failed to take advantage of Lee's mistake. As he began his attack, McClellan's advance actually drove Lee's disparate forces towards one another. Their final position, however, found the Confederate army sandwiched between the large Potomac River behind them and the Antietam Creek in front of them. 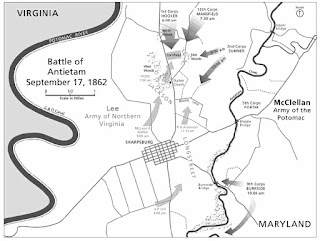 Unable to rapidly retreat across the Potomac, such a situation could prove disastrous to the army should they lose the battle ahead. What's more, Lee with 40,000 men was far outnumbered by McClellan's 80,000. One large push forward with all his troops should have led to the destruction of Lee's forces. 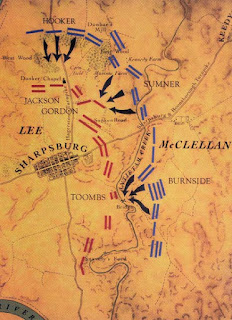 The Battle of Antietam ended in a tactical draw. However, the repulsion of  General Lee's invasion into the North forcing his return to Virginia, was a strategic win for the Union. It was the most significant victory of the war in terms of American foreign policy objectives.  Some argue that Antietam, not Gettysburg, was the turning point in the war. Why did McClellan fail to destroy Lee at Antietam? We invite our readers to watch this short 4-minute video explaining the battle. We can summarize Antietam by describing McClellan's strategy as a rolling attack on Confederate lines from north to south (see map at left). Fighting commenced in the morning at a cornfield at the north end of the battle, then passed further south to an area called the West Woods. From here the action moved to a sunken dirt road now known as the Bloody Lane. Further south it seemed as though the tide turned as Union forces crossed the large stone bridge, pouring troops around Lee's southern (right) flank. Last minute Confederate reinforcements, however, pushed back Union forces and thus brought the battle to an end.

Antietam proved that Lee wasn't invincible - and with Lincoln's Emancipation Proclamation, the war was increasingly tied to the moral fight against racial slavery. Despite their need for Southern cotton, neither Britain nor France - both of which condemned slavery - would be giving their support to the slave-holding South.

Although the war would drag on for another three deadly years, the blood spilled in war against racial slavery would providentially reflect slavery's grim death toll. For the six million African slaves that died in the Atlantic crossings, one-tenth of that number - 600,000 - is the estimated number of American dead during the Civil War. From Lincoln's Second Inaugural Address:


"...if God wills that [the Civil War] continue until all the wealth piled by the bondsman's two hundred and fifty years of unrequited toil shall be sunk, and until every drop of blood drawn with the lash shall be paid by another drawn with the sword, as was said three thousand years ago, so still it must be said 'the judgments of the Lord are true and righteous altogether.'"