October 7: The Feast of Our Lady of the Rosary 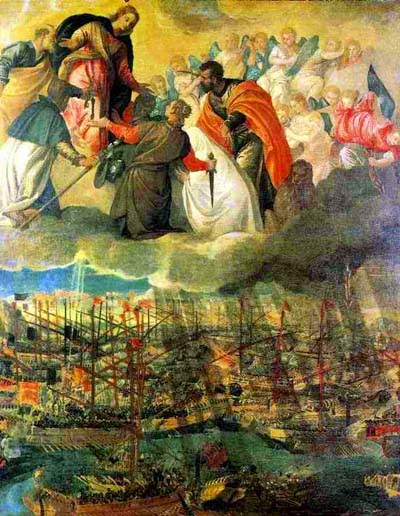 The Church celebrates the Feast of Our Lady of the Rosary in commemoration of the victory of Christian forces at the Battle of Lepanto in 1571. The call to arms against the Ottoman Muslim Turks was sounded by a Dominican Pope: Pius V. It was largely Catholic city-states and military orders who answered his call. They were led by Don Juan of Austria. The events are memorialized in G.K. Chesterton's poem on Lepanto.

Rather than act as the military commander, Pope Pius V called on laymen to do their protective duties as holders of the civic sword. The Pope led Rome and the Christian world in prayers -- notably the beautiful reflection on the life of Christ known as the Rosary


Video Update: Spanish-speaking Catholics deepen our sense of history in reminding us that before Lepanto there was the centuries-long battle to evict the Muslim Moors from Spain (completed 1492 just before Columbus discovered the New World). From Lepanto came Miguel de Cervantes who would write the great Spanish classic, Don Quixote. Here is an excellent short video on the image of Our Lady of Guadalupe in the historic battle:

UPDATE: There are two other events which we commemorate as victories of Christian men in arms against Islamic invasion. The first is the Battle of Tours in 732 (a century after the death of Muhammad) in which the Muslim forces were stopped in France by Charles "The Hammer" Martel, grandfather of Charlemagne.

And the other is the Battle of Vienna in 1683, which ended the threat posed by the Ottoman Turks. The Polish king, John Sobieski, was hailed by pope and common folk as the savior of Christendom.