"Yes, I am a king. I was born for this, I came into the world for this: to bear witness to the truth; and all who are on the side of truth listen to my voice."  (Gospel of St. John)

The liturgical year of the Church ends with this feast day to remind us how sacred history will come to its fulfillment with the return of Christ as King. Yes, Jesus is your personal Lord and Savior. He is also the Ruler of Nature, the Lord of History, and the Slayer of the Leviathan.  We know Him in the Eucharist as we are becoming not his friend, but incorporated in His Body. We remember his Incarnational transformation of physical nature at the Annunciation, and we await his triumphant coming again as Head of the Mystical Body incorporating all of humanity in Himself. Catholics are always living within these three comings of Christ. Maybe because the Eucharist is less like friendship and more like incorporation, we don’t emotionally emphasize our "personal relationship with Christ" -- but we look, instead, from the vantage of Holy Communion, both backward and forward to the actions of the Cosmic King.

The feast of Christ the King was  instituted by Pope Pius IX in 1925 as atheistic movements were persecuting Catholics in Spain and Mexico and the Orthodox in Russia. In his encyclical Quas Primas he asserted the independent authority of the Church in relation to States. He also asserted that political communities were subject to the authority of Christ as well. Christ is King of the whole man and the whole of his social relations. This feast calls Christian men to understand that civic life cannot be divorced from God. As we deepen our bonds in the church we must shape our nations as well in a fraternal international order in consonance with Divine Providence. Establishing the Kingship of Christ is more a matter of ordered loves than creedal assertion. Christ the King and devotion to the Sacred Heart are deeply tied. Pius IX ordered on this day every year that MANKIND be consecrated to the Sacred Heart.  Politics is one of man’s  highest callings when understood as forming fraternal bonds to provide for the civic common good by enforcing justice. Such a city on a hill gives honor to Christ as King and Lord. A man is a sign of Christ when he exercises legitimate authority. This feast is a good day to reflect on this dimension of Christian identity. We are meant to be rulers over ourselves first. The father and mother are to rule over their children. Politically men are called to establish law and order to rule our civic communities and lastly as a human race we are ordered to have dominion over the earth. It is a great threat to both Church and State that the ruler as an integral part of the Christian personality has become so neglected. This is particularly true in the priesthood which is the primary Christian template of a fraternity of ordered love and authority.

Christ shows us not only the face of God, but He has enlightened us to our own true nature as well. Man is by nature a eusocial organism in which all of humanity is united in  an interpersonal union headed by the alpha male. That is our final perfection as creatures truly made in the image of an interpersonal Trinity. On our way to that final union we live in the communal forms of marriage and nations. Christ’s Kingdom on earth is His Father’s Kingdom. Christ is King, but he is a Son as well. We are incorporated in his sonship-filiation. This is what we pray for in the prayer He taught us, that the rule of the Father would be done on earth as it is in heaven. Let us bow to the king and accept the order of patriarchy. A particular concern of Pius IX in declaring this feast was to reassert that modern man is not an emancipated individual but still a subject to the authority of the one true King. Let us contemplate this final feast in the Church calendar, in order to better greet the baby at Christmas and receive His Body in the Eucharist -- remembering that when the trumpet finally sounds, indeed, he will "bestride the narrow world like a Colossus" and Eternal King. 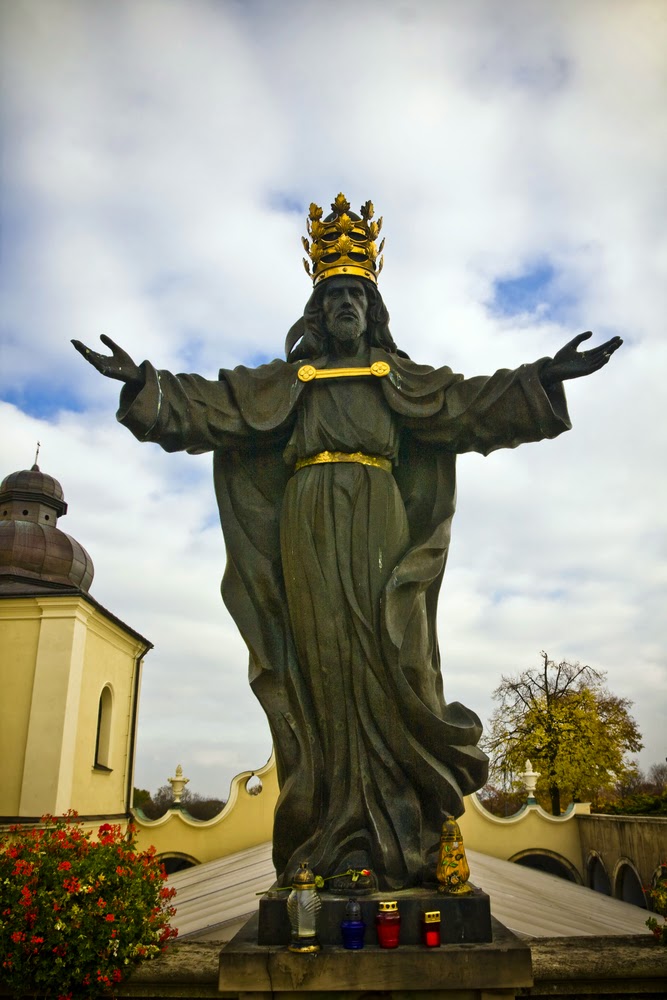 UPDATE -- A stanza from a translation of the 'Te Deum':

"From Thy high celestial home,

Judge of all, again returning,
we believe that Thou shalt come
in the dreaded Doomsday morning;
when Thy voice shall shake the earth,
and the startled dead come forth."