NOVEMBER 2: The assassination of President Diem

The tumultuous November of 1963 began with the assassination of a Catholic president: Ngo Dinh Diem of South Vietnam. Three weeks later, another fell.

For years the U.S. strongly supported Diem, but the turning point was JFK’s appointment of Henry Cabot Lodge, Jr. (Nixon’s running mate in 1960) as our ambassador – replacing Frederick Nolting. 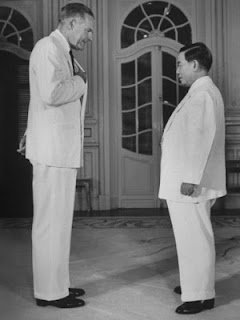 Diem’s younger brother and top advisor, Ngo Dinh Nhu, was killed along with him. The widow of the latter, Madame Nhu, had acted as first lady since 1955 when the unmarried Diem had become the country’s first president. 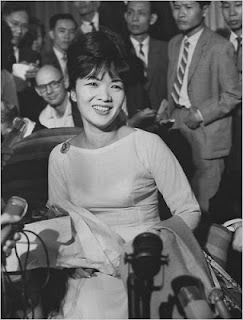 (The always colorful Madame Nhu lived long in exile; she died last year in Rome on Easter Sunday.  After the Saigon assassinations on the second day of November, All Souls Day 1963, she said: "Whoever has the Americans as allies does not need enemies.")

Dr. Pence says that JFK’s greatest failure as a public leader was his betrayal of our ally, President Diem. Kennedy was never proud of having allowed his underlings to give the green light to the coup; and in a mysterious way, it marked the loss of the American leader’s ‘Mandate of Heaven’…

[Diem’s older brother, Thuc (d. 1984), was the archbishop of Hue. One of the nephews of Diem was Cardinal Thuan (d. 2002), who after being imprisoned for years in the North, served as head of the Pontifical Council for Justice and Peace].

Check out this interview with Ambassador Nolting, in which he calls our involvement in Diem's overthrow "disastrous."

2017 UPDATE: Interview with Geoffrey Shaw, the author of  The Lost Mandate from Heaven: The Betrayal of Ngo Dinh Diem, President of Vietnam. This is the definitive account of the greatest blunder of the Vietnam war-the American inspired assassination of President Diem in Nov, 1963.  The man with the heart of darkness was Averell Harriman of the State Department. The young atheist news reporter David Halberstam could never understand the Catholic Confucian president who was much more an authentic nationalist than Ho Chi Minh. Replacing Ambassador Nolting with the Brahmin Henry Cabot Lodge left no one to counter Halberstam's prejudicial reporting and Harriman's sinister machinations. The champions of secular liberal democracy orchestrated the murder of the one leader who could have negotiated a settlement in Vietnam. This  primal political lesson of the Vietnam War was hinted at but inexcusably misrepresented by the Ken Burns PBS series. It is easier to paint an Asian Catholic as a tyrant than accuse a liberal Democrat and secular journalist of leading roles in a generation's greatest tragedy. The wrenching Last Man Out account of the fall of Saigon.