"What a manly man is this chevalier!"

Gerard Manley Hopkins, S.J. (d. 1889) wrote this poem, 'The Windhover,' about the glory and majesty of the everlasting King of Kings. Take a listen.

I caught this morning morning’s minion, king-
dom of daylight’s dauphin, dapple-dawn-drawn
Falcon, in his riding
Of the rolling level underneath him steady air,
and striding
High there, how he rung upon the rein of a wimpling wing
In his ecstasy! Then off, off forth on swing,
As a skate’s heel sweeps smooth on a bow-bend:
the hurl and gliding
Rebuffed the big wind. My heart in hiding
Stirred for a bird,—the achieve of, the mastery of the thing!

Brute beauty and valour and act, oh, air, pride, plume, here
Buckle! And the fire that breaks from thee then, a billion
Times told lovelier, more dangerous, O my chevalier!

No wonder of it: sheer plod makes plough down sillion
Shine, and blue-bleak embers, ah my dear,
Fall, gall themselves, and gash gold-vermilion. 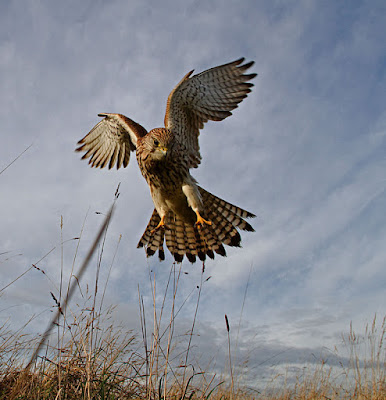 Mitchell Kalpakgian does a good job of explaining Father Hopkins' intent. An excerpt:


"Christ the King moves and acts in His dominion– all of Nature and Creation—with the same all-powerful, all-encompassing regality that the windhover’s flight encircles in the beautiful grace of its movements...

"This 'brute beauty' of manliness that Christ the noble king, the chivalrous 'chevalier,' epitomizes is strength revealed in the form of love, service, sacrifice, and protection— the beauty of masculine goodness that is willing to die and shed blood for the ones it loves, to 'fall' and 'gall' and 'gash gold vermilion' in the ultimate act..."

And this from a reader review:


"When I was a freshman in college and completely out of my depth in Lit 1, the teacher assigned this among other works... I found my encounters with G.M. Hopkins to be the most profound. I wasn't religious and hadn't a clue about Catholicism, which informs his poetry, yet its intense, clotted rhyme schemes, the spikey spirituality and the way Hopkins invented terms to describe his method ('inscape' for one's interior psychological landscape) just clicked.

"I recently met with a young Japanese national studying and working in Hawaii who had been given a copy of the same edition I had assigned to me in 1970. Her hands trembled as she opened the book to 'The Windhover.' She asked, in that way readers will, 'Have you ever read this?' I quoted the opening lines. Still magic."