Sociobiology is a discipline in biology pioneered by E.O. Wilson with the publication of his massive Sociobiology: The New Synthesis in 1975. Wilson understood that particular social behaviors and bonding patterns of organisms led to survival for the group. He wanted to show that traits that foster optimal social organization for animals are selected and transmitted in accordance with the standard evolutionary model. He also wanted to apply this to human nature and the study of anthropology and history, since we too are a social group of animals worth studying. He wanted to introduce a biological basis for sociology.

His work infuriated University leftists and feminists. Wilson refocused evolutionary study from the study of individual traits and genes to looking at social groups and interactions as a whole. Before he did this more synthetic work, he was the world’s leading authority on ants. Ants and bees are organisms that live in communities of intense social cooperation. They are called "eusocial organisms." Studying them drives a man to think in wholes. In a later book Wilson argued that the intense wide-scale cooperation of humans made us eusocial as well. Wilson understood the link between survival and social cohesion. Here is a stunning two hour documentary on his work. 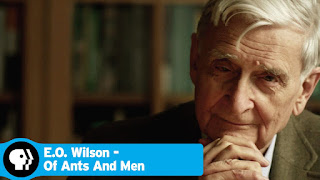 Catholics steeped in the sacramental order make a similar claim in proposing the Eucharistic church as the social cohesion insuring eternal life. The Church upholds an even more striking trait of humans: that we are capable of species-wide social cohesion.  Unlike ant colonies and bee hives, humans are not forever restricted to the local tribe. As the Trinity is three person in one God, humanity is meant to be millions of persons in one Body. Humans cannot mature as individuals until we mature as a species conformed as a unitary interpersonal social organism under the headship of Christ.

Wilson looked beyond the single gene in the single individual to the whole group and its interrelationships. Henri de Lubac was a Catholic theologian who proposed a similar paradigm shift.  He understood Catholicism as a transformative culture for a species -- more than a means for individual souls to be saved. He did not deny the salvation of individuals, but he thought that function secondary to the communal reality. One of our AOA writers has written a synthetic summary of four of de Lubac’s’ works. Catholic sociobiology starts with a theocentric understanding of human nature, and ends with the ecclesial social cohesion of the Body of Christ.

Here are a few selections from Mr. Lynch’s paper:


"For de Lubac, the twin ruptures of the natural from the supernatural and the individual from the social can only be healed in Christ. It is precisely in Christ that man arrives, united in one body, at his supernatural end. Christ, 'in the fullness of time,' comes at the end of a history that is both cosmic and salvific. He is both the cosmic Christ through and for whom all things are made, as well as the New Adam in whom man, radically individualized by sin, is reconstituted and redeemed."

"Since the nineteenth century the work of atheist humanists like Comte, Marx, and their successors have attempted to offer a coherent plan for the human race. Atheistic humanism bound humanity together in a death clasp -- yet that formulation seemed more heroic than the Christian narrative of escaping to eternal safety one coward at a time. For de Lubac, Christianity cannot defeat atheist humanism without presenting its own coherent vision of man. This vision, however, first requires a return to a theocentric and Christocentric understanding of humanity. Sinful man, broken and individuated, has been severed into his constituent parts. In this state he cannot regenerate himself like a plant; but, like a body, only decompose. This is not to say that after sin human nature is utterly corrupted, but rather that human nature is fallen and doomed to eternal death if it remains in its atomized state. Man must be, so to speak, ‘re-Adamized’ if he is to be de-atomized."

"For de Lubac, there was a profound convergence in Scotus’ rejection of a sin-centric Incarnation and Chardin’s appreciation for creation’s relation to the Son, for whom and through whom it was made. Scotus, Chardin, and de Lubac would all agree that it was for the sake of the Incarnation that God created the heavens and the earth."

"Every physicist knows that mankind and the earth as a viable planet will not be here in a few billion years. We are in a life and death struggle that encompasses both matter and spirit. If we depend only on matter, the laws of nature are relentlessly against us in the long term. Man’s only hope to escape an ultimate death is to corporately bind himself to the living Christ in his Mystical Body, the Church. De Lubac’s Catholic vision of man was of man as a whole. He agrees with the atheistic humanists that we humans are tied together, but not in a death clasp waiting for a meteor to hit or the heat from an expanding Sun to end our sorry tale. Humanity is drawn together in the Church as a corporate Body so we experience our common destiny, which will surpass the limiting laws of matter and space. Our common destiny is a transcendent one -- eternal life in Christ."


Our full set of essays on Catholic Sociobiology
Posted by Farmer at 2:30 AM