Friday BookReview -- ARMENIA: the Calvary of the first Christian nation

"Who today remembers the extermination of the Armenians?"

(The question offered by Hitler on the eve of his invasion of Poland,
Sept 1939 -- one week after the Nazis and Soviets had become allies) 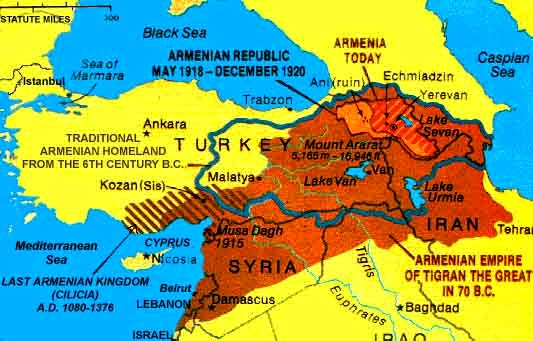 A couple months from now, Armenians will mark the 100th anniversary of the massacre of their forebears by the Ottoman Turks. More than a million and a half perished.

In many ways this slaughter was both a revolt against the Islamic structure of the disintegrating Ottoman Empire by the modern  nationalism of the Young Turks, as well as a mass murder of an Orthodox people who slowed the way of the emerging ethnic secular nation of Turkey.

(It is one of the current causes for the increasing tensions between Armenia and Azerbaijan. The latter has more than three times the population of Armenia, and far greater wealth because of the Caspian Sea oil.)

This five-minute ABC News report provides an overview of the first of the world's many twentieth-century genocides.

From a review of a book by an Armenian priest, an eyewitness of the slaughter:

Given recent history, it would seem the term "ethnic cleansing" is of late 20th Century origin. Armenian Golgotha, Grigoris Balakian's firsthand account of the genocide during World War I, disabuses any such notion. Balakian notes several times that the Ottoman Empire embarked on an intentional campaign to "cleanse" itself of Armenians...

Balakian was one of some 250 Armenian intellectuals and leaders arrested by government order in Constantinople on April 24, 1915, the event commonly viewed as the beginning of the campaign against Armenians in Turkey. Calling what ensued "cleansing" is perhaps the least blunt description used in his memoir. Perhaps that is because Balakian attributes its use to a police captain who escorted him during part of his trip into exile. According to Balakian, "the Turks always used this term, especially the government officials, when referring to the massacre of Armenians."

Massacre is a term used far more often [by Balakian]... He frequently says the Ottoman Empire's actions were a deliberate plan to "annihilate" or "to completely exterminate the Armenian race." First published in 1922, Armenian Golgotha was, sadly, a preview of what the world would become all too familiar with later in the 20th Century, whether the Holocaust in World War II or the "ethnic cleansing" that occurred in Europe, Asia, and Africa later in the century. Yet Balakian never uses the term genocide. There's good reason — it was not coined until 1943...

Armenian Golgotha is actually a combination of two separate volumes written by Balakian after the war. The first, called "The Life of an Exile" in the book, was the work published in Armenian in 1922 and covers Balakian's life from the beginning of the war through his journey from Constantinople toward Der Zor, an outpost in today's Syria abutting a vast desert where thousands of Armenians died. The second volume, "The Life of a Fugitive," details his escape and two years of disguises, false identities, and struggles in an often harrowing effort to return to Constantinople. It was not published until 1959, some 55 years after his death, when it was discovered among his sister's papers when she died. With the assistance of a variety of people, American poet and author Peter Balakian began translating the work into English in 1999, a process that culminated in the book's publication in the U.S. in 2009. The book was released in trade paper last month.

Balakian relates the stories of massacre upon massacre on the forced marches to exile... In addition to outright murder, thousands would die along the way or in overcrowded, filthy camps whose conditions Balakian says the Turks created in the hope of starting epidemics...

"In reality," Balakian writes, "deport was synonymous with murder." In fact, "the life an Armenian was worth less than that of a chick or chicken."

The effects of these events on individuals is seen even in Balakian. Although he credits his survival to his faith, there are times it appears even that comes into question. At one point, rather than pointing to prayer, he observes that "believing that wishing for something could make it happen, I used to repeat over and over to those around me, 'I have decided not to die.'" And the seemingly endless horror and atrocities leads him to conclude later that "we'd been abandoned by both God and mankind; our only salvation was the grave, but we couldn't even count on that."

Balakian's perspective is unique in other respects. Fluent in Armenian, Turkish and German, he was able to speak directly with individuals who experienced or observed the events from a wide variety of standpoints. In addition, when Archduke Franz Ferdinand, the heir to Austria-Hungary throne, was assassinated in 1914 and war was subsequently declared, Balakian was studying in Berlin and provides firsthand accounts of events there. And on November 13, 1918, he saw 44 warships of the Entente fleet steam past Constantinople into the Bosphorus.

In addition to the extreme and excruciating events during the war, Balakian also recognizes an outcome that, while not physically painful or fatal, was at least as damaging and deadly for Armenians as a whole. He repeatedly comments that the deaths of the Armenian "martyrs" and one of the hopes that kept survivors going was that in pursuit of an independent Armenian nation once the war was over. Yet that dream was little more than false hope based on a belief the Entente powers were fighting for "rights and justice" and on misleading promises. "After the Armistice, all such promises would soon be forgotten, as each victorious power aimed first to secure the lion's share of territory for itself," Balakian writes. "An oil field would prove much more valuable than the fate of a small and weak Christian people." Thus, although an independent Armenian republic was proclaimed, in late 1920 it was invaded and subsumed by Turkey and the Soviet Union, giving pause to whether the suffering of the Armenians was meaningless.

Those who deny or dispute whether the Ottoman Empire embarked on a genocidal campaign against the Armenians will, of course, find Armenian Golgotha biased and one-sided. Others will find it an excruciating firsthand account of ethnic torment. But the somewhat surprising fact that the Armenian genocide continues to cause debate nearly a century later doesn't detract from the fact Balakian accomplished his main goal — to commemorate the events of 1914-1918 and the people caught up in them. 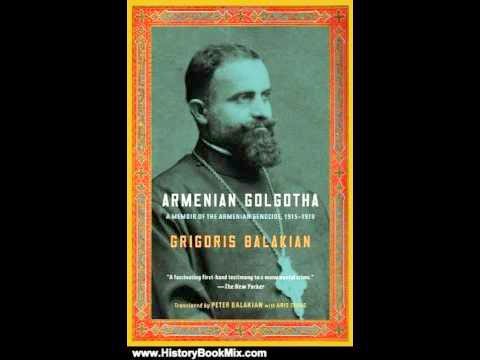 Armenia was the first nation to embrace Christ en masse -- so early, in fact, it predated the Council of Nicaea by more than 20 years! Their gratitude for this is centered on their patron saint, Gregory the Illuminator.

The capital since 1918, Yerevan, has a population of a million (one-third of nation). The main religious center of Armenia, however, is Etchmiadzin -- the fourth largest city.


From the poem "Wishes for Armenia" by Bedros Tourian, who died very young of consumption (1872):


The starry sky no comfort brings:
To me it seems a veil
Strewn with the tears that Ararat
Sheds from his summit pale...

Armenia’s mountains dark may smile,
Siberia’s ice may smoke,
But stern, unbending spirits still
Press on my neck the yoke.
Inflexible and cold are they;
When feeling surges high,
And I would speak, they stifle down
My free soul’s bitter cry.
Forget thee, justice ? Never!
But ere my life departs,
Rather may I become a sword,
And make thee pierce men’s hearts!

When e’en the rich man and the priest
A patriot’s ardor feel,
And when Armenian hearts at length
Are stirred with love and zeal —
When free-souled sons Armenia bears,
These days of coldness past,
And fires of love and brotherhood
Are lighted up at last —
Shall I forget thee then, my lyre?
Ah, no ! but when I die
Rather may I become thy voice,
And o’er Armenia sigh! 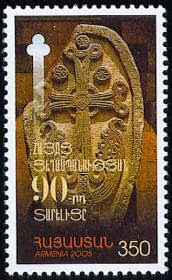 UPDATE: One European visitor said he had to be almost dragged away from the Noravank monastery set in the red hills, it was so fascinating.


Here is an article on the newest Doctor of the Church.