CATHOLIC SOCIOBIOLOGY: Russell Hittinger and the Nature of the Polity in Catholic Social Thought


F. RUSSELL HITTINGER is chairman of the Catholic Studies department at the University of Tulsa, and is on the governing council of the Pontifical Academy of St. Thomas Aquinas. He is one of very few Catholic thinkers who addresses the clerical hostility toward "fraternity" in the early formation of Catholic social thought. The communal claims of man as citizen were too totalizing for papal authors to concede.  While the Church was jealous in asserting her supremacy as an institution to the nation-state  in its ascendance (1800-1960) there are "perplexities" in how the church should describe the polity as the nation-state seems to be weakening.

This is his introduction to an essay
Toward an Adequate Anthropology: Social Aspects of Imago Dei in Catholic Theology
"Can you be the Imago Dei on your own?
Modern Thomism on the Social Character of Human Existence"

Catholic social doctrine (hereafter 'CSD') began in response to the new anthropological and political creed of “Man and Citizen” that swept from France to the rest of Europe and her former colonies in the late 18th and 19th centuries. This creed of "liberty, equality, and fraternity" considered the human person in two ways: first, as a being of nature, having natural liberties and rights which had been obscured or broken by the historical social order; second, as a citizen, standing equally among other citizens before the State. Fraternity was associated preeminently, if not exclusively, with citizenship; for as Rousseau among others had argued, membership in the State reconstitutes the broken relations of nature and history. Other social memberships claiming their origins in nature, history, or divine revelation were deemed legitimate only insofar as they were either the private choice of individuals, or insofar as they were permitted or “conceded” by the State. 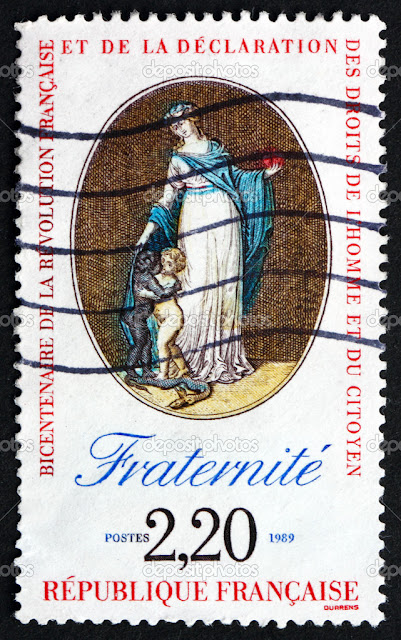 Catholic thinkers, both clerical and lay, quickly targeted the ideal of fraternity as the most troubling part of the new creed. Cardinal Chiaramonti of Imola (the future Pius VII, later kidnapped and held in solitary confinement by Napoleon), put on his letter-head: “Liberty, Equality, and Peace in our Lord Jesus Christ.”[1]  Throughout the 19th century, Catholic thinkers attempted to identify social domains having a sacred solidarity not reducible to state citizenship. During the pontificate of Leo XIII (1878-1903), the pattern for CSD was well established. The Church took a scissors-like approach to the State, limiting and contextualizing citizenship according to higher and lower social orders. From below by marriage and family; and from above, the Church.

In a footnote from the same essay there is a hint toward the possibility of developing a more communio approach to the polity.

[1] ...For his part, Leo XIII contended that “liberty, equality and fraternity” had its grounding in the relations of the divine Trinity. ...By this polemical flourish, Leo did not mean to conflate nature and grace, much less to suggest that Christian Trinitarian theology is merely another way to restate the Rights of Man and Citizen. Rather, he meant to remind his flock that they already have a more adequate understanding of these things.


We have tried at AOA to answer this polity question. Grounded in the sacramental life of the Church and drawing from the patriarchal fraternity of the priesthood, we have looked to studies of human male territoriality and hierarchy in biology to argue that the polity is a masculine form of communion. Theistic citizenship is as dependent on its single-sex group character as religious marriage is dependent on heterosexual monogamy. Grounded in the biblical narrative of the nation of Israel and the command to baptize the nations, we have also argued that each nation is a spiritual communion of men with a common good under God. The nation is as fundamental a Christian social form as marriage, though not a sacrament. The nations as social bodies must not be turned over to ethnic pagans because of the failure of Christian men to understand our loyalty patterns. Men, women and children belong to the national body but the structural lattice of the community is the shared protective duties and bond of the men. Sanctifying the religious, civic and domestic loyalty patterns of humanity is what we call Catholic Sociobiology.

Here are some excellent talks by Professor Hittinger at the Lumen Christi Institute in Chicago:

On the theo-political problem.

On the Declaration of Religious Liberty at Vatican II.

A very instructive article from 'First Things' magazine in which Hittinger contrasts the more sacral view of the State found in Leo XIII with John Paul II in Centissimus Annum which had no references to the State "as in the image of Divine governance.”  Hittinger left it as a question if a rights based personalism would be an adequate conception of the polity. He does remind us of the historical trauma from which new leaders emerged from the captive nations of the Soviet Union. He quotes Czech President Vaclav Havel, “in favor of a political system based on the citizen and recognizing all his fundamental civil and human rights in their universal validity." The state he said must be based on rights rather than “nationality” or “religion”. This statement from a poetic hero of the aftermath of Soviet tyranny is understandable. It is also true that Havel resigned as President when Czechoslovakia split into Czech and Slovak republics based on language, ethnic and religious differences. We must judge both Havel’s attempt at governance and the encyclical’s conception of the State as sorely deficient in providing a proper theocentric anthropology of solidarity as the basis of the polity.

Our full set of essays on Catholic Sociobiology are outlined and linked here.