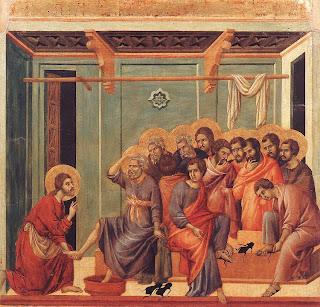 An explanation of feet-washing at the birth of the Christian priesthood by Dr. Pence:

On the night before He died, Christ formed the foundation of the Church by a new command of ordered love. This commandment was not the general order that each of us is to love our neighbor as ourselves.  He issued a more particular command to His chosen apostles: to love one another “as I have loved you.”  Christ 'transmitted to the apostles the Kingdom received from His Father' (Pope John Paul II on the Birth of the Church, August 1989).

This newly ordered love of an elected group of men with the power to forgive sins, cast out demons, and heal the sick shapes the sacred fraternity of the priesthood and the Church. This sealed-character relationship with Christ that is fully realized in bishops, and shared by priests and deacons, is the sacred bond from which Christ’s earthly presence in the Eucharist is made real. The Kingdom of God is now present as the new Adam and His sons are incorporated as priests into the communal love of the Trinity.

Just as the Levitical priesthood was born in a bloody battle, so the new priesthood was ordained in a struggle. It was essential that the priestly bond be shaped by the deep love of Father and Son, the filial fraternity of Sons and brothers -- not polluted by incestuous counterfeit or betrayed by avarice for gold or fractured by arrogant pride.  This priestly bond was prepared to receive the 'generation of the Church by Christ's redemptive death' [JP II], as well as the two comings of the Holy Spirit: sealing their power to forgive sins on Easter night, and sweeping them into the public manifestation of their mission on Pentecost Sunday.

Before the priestly prayer was said and the newly ordered love covenant was established, Judas was expelled from the room – discreetly but definitively.  And before that, the necessity to wash the priestly bond clean of the Evil One was demonstrated by Christ in the washing of the feet.   Peter (like so many of his clerical successors today) saw the Lord on his knees as an act of humility and service. He was having none of it. But Jesus corrected him: “You do not know now what I am doing, but later you will understand."

The washing itself was not an act of self-negation, but an authoritative act by Christ establishing a new priesthood which would sanctify and rule his Church.  Christ’s action was foreshadowed by the priestly consecration when “Moses brought Aaron and his sons and washed them with water” (Leviticus 8:6 and Exodus 30:17-21). After Christ entered Jerusalem on Palm Sunday, one of his first acts was the cleansing of the Temple. On Holy Thursday, He would wash the new priests of the new Temple. This same order of consecration is described in Numbers when Moses first consecrates the altar, and then "takes the Levites from the Israelites and purifies them" with "the water of remission."

Christ’s washing was a casting out of the Evil One who was polluting the collegial body of the new priesthood (“for He knew who should betray Him.”)  Priestly acts of exorcism, healing and forgiveness of sins are spiritual acts of authority -- as was the Lord’s washing of his apostles. Thomas Aquinas saw the command to “do as I have done” in the washing of the feet as a command to laymen to forgive one another's trespasses.  For prelates, Aquinas saw this as an order to sacramentally forgive sins.  Every act of forgiving sins is an expulsion of one Spirit of authority for the sweeter yoke of another.  It takes authority to set the captives free.  Every baptism is an exorcism. The water that lifted the Ark left many others drowned; and the Red Sea which split for the Jews closed on Pharaoh’s army. If Christ had to rid himself of one of his own – numbered among the Twelve – why should his followers be spared the same troubling duty?  “If I your Master washed your feet, you should wash one another’s feet.”  This was a priestly purification command, which preceded the Love command. It was a bestowal of authority and the assignment of a duty. The Eastern Liturgy prayer of that night puts it this way: “When Thy glorious disciples were enlightened at the washing of their feet before the supper, then the impious Judas was darkened …”

Christians who have no apostolic priesthood can be excused for misinterpreting the foot-washing command as a general ordinance (see Foot-washing Baptists).  English monarchs can be admired as they pass out money to the poor, inspired by the King of kings on His knees (see Maundy money). Many early Christian communities integrated foot-washing as a favored part of Eucharistic liturgy – a sort of kiss of peace with an added touch of humility – (see Saint Ambrose, d. 397). All these practices are understandable.  For Christ was indeed a servant leader. He preached it often; thus, to match His persistent general teaching with that particular iconic moment seems irresistible.

But Jesus personally handed his apostles the Body and Blood, and no one dwells on His being a waiter! Likewise, when he separated his apostles from the power of the Evil One, we shouldn’t over-interpret His bended knee.

The love which will save us from the Evil One is the powerful sacramentally-ordered love of Christ and his purified apostles. Christian love is an ordered love, and the washing of the apostles’ feet manifests the authoritative love of a High Priest instituting a new ordinance.   We must insist that priestly ordination, the power to cast out sin, and the necessity of apostolic fraternal correction which constituted the substance of Christ’s act not be lost in the Zeitgeist.  We are not recounting this story to soothe priestless Protestants or feckless feminists.

The spotless purity of the Marian Church can only be safeguarded by a protective authority ready to cleanse and do battle.  Wherever Christ appears too publicly, He will be attacked.  Saint Joseph had little time to coo with the baby Jesus before He was leading His sacred charges into the dangers of a nighttime flight.  So, before Christ entrusted His presence with the new priesthood, he burnished some of them and expelled others.  The shirking of duty by Peter, the uncertain voice of Thomas, the cowardice of all the others must be confessed, repented, and reformed. The perfidy of Judas had to be washed away and expelled.

"The Lord will wash away the filth of the daughters of Zion; he will cleanse the bloodstains from Jerusalem by a spirit of judgment and a spirit of fire." (Isaiah 4:4). It was Irenaeus who recalled these words when he beheld the new Moses washing the feet of Aaron and his sons. When Irenaeus reflected on the washing of feet at the Last Supper, he did not see a Christ adding service hours to His resume.  He saw “the Word Himself ‘…washing away the filth of the daughters of Zion,’ when He washed the disciples' feet with His own hands. For He who washed the feet of the disciples sanctified the entire body, and rendered it clean.”
(Irenaeus, Book IV Chapter 22, Against Heresies)

The reintegration of the washing of the feet in the Holy Thursday liturgy is a very recent event (1955). It is not surprising that we are still learning the deep significance of this ancient ritual. It may be that it would be better placed in the morning Chrism Mass centered on the bishop and his priests.  For many, the male-only character of the foot-washing seems an affront – but so is a Church built on a male priesthood, the Real Presence of Christ, and a sacramental form of confession.  The flattened de-sacralized spirit of modernity and the congregationalist mentality of Protestants can make no peace with the authoritative masculine fraternity that Christ instituted on Holy Thursday to maintain His Living Presence among us.  Rather than inviting the ladies and grade-school girls to join in the foot-washing festivities, let us more deeply reflect on what we have received and render a more profound account of this pivotal event in the life of Christ and the Church.

UPDATE: In 2016, Pope Francis allowed the washing of women's feet in this ritual. Because he understands this as a sign of service, he sees no reason to exclude women and in his own practice has included non-Christians as well. This is entirely consistent with the symbol of service interpretation. Our comments when he made the announcement are here.
Posted by Farmer at 2:30 AM