"Knowest thou not that I have power to crucify thee and I have power to release thee? Jesus answered, Thou shouldest  have no power against me  unless it were given thee from above."

On the same day Jesus rendered unto Ceasar what was his, He perfectly obeyed the authority of His Father. He conquered death in an act of authority over nature that reorganized the biological sphere under a new King. The alpha male of the human species having been born of a perfect Virgin drew a brotherhood of priests unto himself and conferred upon them the authority to maintain His Presence on earth. He made them a special band under a particular leader and ordained that communal hierarchical form of authority for public governance. The Kingdom of God was at hand. The victory of Christ is not a rebellion but a great act of authority and restoration of  proper rule. The great commission was a command to imbibe the new spiritual authority of the apostles in some way with the already existing authority of the civic rulers. The supernatural spiritual organism of the apostolic church was to transform the nations-kingdoms, republics, tribes and cities into a new level of accord.  "And Jesus came up and spoke to them, 'All authority in heaven and on earth  has been given to me. Therefore go and make disciples of all nations baptizing them in the name of the Father, the Son, and the Holy Spirit.' "

There is no personality so absent in contemporary Christian life as the ruler and man of authority. We have been blessed with priests and prophets. We have been cursed by charlatans and weaklings. We hunger for the Kings. Their absence is always a disaster for the weak and the poor. Saint Louis was a king who fought in the Crusades, cared constantly and publicly for the poor of his kingdom, and was a man of deep prayer and many fasts. Here is his beautiful instructive letter to his son that Catholics pray in the Office of Readings every year on his feast day. (A Review of Before Church and State:Social Order in the Sacramental Order of Louis IX)

It is a fundamental obligation of Christian men to rule our civic communities as well as our passions and households. How men participate in civic rule can entail faithful loyalty to a good king or taking up arms as a minuteman in a republic. The servant ruler does not mean that a ruler or citizen soldier relinquishes his sword against external enemies or internal criminals. It means the acts of the ruling authority are done for the good of the community, not the aggrandizement of the ruler. The Shepherd is not a nursemaid. Community without authority recalls the decadent Israel "when every man did as he pleased." Acts of authority are not limited to proclaiming doctrine by churchmen or laws by civil rulers. The actual body -- civic and ecclesial -- must be shaped, pruned, and ruled by the ruling authority. Men are called and promoted. Other men are released. Some men are punished and shamed. Rulers inspire loyalty that shapes men into communal bodies capable of great acts of protection and love.

Saint Louis (b. 1214) did not become a saint by laying down his sword or neglecting the punitive duties of his office. Men obeyed him and some men rightly feared him. Saint Louis, pray for us that God will once again give us men such as thee. 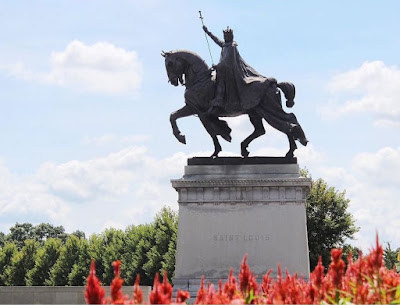 UPDATE:  "We know from Louis’s biographers that 'From the beginning when he came to hold his realm and knew himself of discernment, he began to build churches and many religious houses …' Most celebrated was the Sainte-Chapelle, his royal chapel on the Île de la Cité in Paris."

While on crusade in North Africa, Louis died from sickness in 1270 - four years before the death of St. Thomas Aquinas.
Posted by anthropology of accord at 4:00 AM