The Drillmaster of Valley Forge 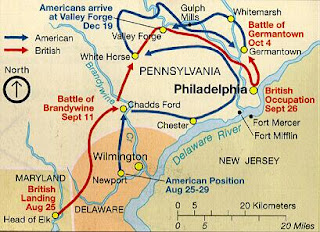 With over 30,000 combatants, what was the largest battle during the entire War for Independence? Brandywine (September 11, 1777).

The Continental Army was defeated at Brandywine -- allowing the British to soon occupy our national capital at Philadelphia. The Congress fled 80 miles west to Lancaster, but was forced to keep going to York.


With the December winds buffeting them, the Continental army eventually straggled into the wilderness of Valley Forge -- twenty miles from Philadelphia. Of the 12,000 soldiers, only a fourth of them had shoes. The men set to work building huts.


Things changed in February 1778 when a soldier from Prussia, Friedrich von Steuben, entered the Valley Forge camp. He had been educated by Jesuits before joining the Prussian army -- the best disciplined force in Europe.

General Washington gave von Steuben the authority to restore morale and to turn the men into stout-hearted soldiers. One historian says that it was "Steuben’s ability to bring this army the kind of training and understanding of tactics that made them able to stand toe to toe with the British."

As Steuben’s work progressed, "news of the United States’ treaties of alliance with France reached Valley Forge. Washington declared May 6, 1778 a day of celebration...

"Two weeks after the celebration, the Marquis de Lafayette led a reconnaissance force of 2,200 to observe the British evacuation from Philadelphia. When a surprise British attack forced Lafayette to retreat, von Steuben’s compact column formation enabled the entire force to make a swift, narrow escape. At the Battle of Monmouth on June 28, the American troops showed a new discipline. They stood their ground during ferocious fire and bayonet attacks, and forced the British to retreat...

"The Continental Army’s new strength as a fighting force, combined with the arrival of the French fleet off the coast of New York in July 1778, turned the tide of the war."

Take a look at the first ten minutes of this video narrated by Charles Kuralt.


One of the American cities named after the Prussian officer is Steubenville, Ohio -- home of Franciscan University. 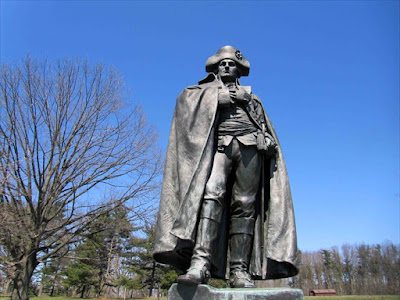 From one of the final chapters of The Red Badge of Courage:

"The impetus of enthusiasm was theirs again. They gazed about them with looks of uplifted pride, feeling new trust in the grim, always confident weapons in their hands. And they were men."