Jordan Peterson (b. 1962), a Canadian clinical psychologist and professor of psychology at the University of Toronto, has built a huge internet presence by filming his interviews and classes about gender, status, suffering, and the meaning of life.

He doesn't participate in weekly liturgical worship (yet), but he explains the phenomenon of Christ and meaning of Christianity at a deeper level than most of our current Christian clergy. He achieved notoriety by refusing to use the myriad of new pronouns that his gender-confused adolescents and older bureaucrats were demanding at his university. He used the spotlight of his fifteen minutes of fame to deepen the conversation. 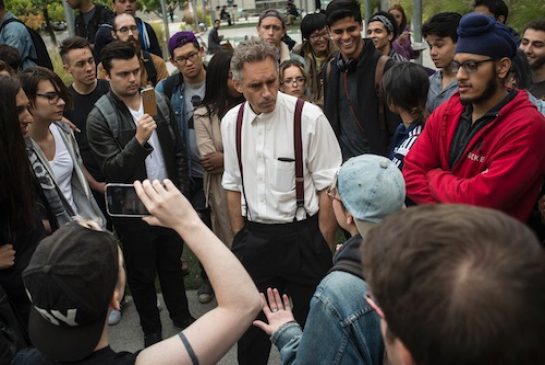 As a true teacher, he has begun an extended conversation with mostly young men about how to "stiffen the spine and take one's place in the dominance hierarchy" to give meaning to existence. He observes and concludes that existence is best described as Suffering. He describes most modern movements, especially feminism and gender ideology, as "a rebellion against the structure of reality." This is very similar to Pope Francis who treats gender ideology as an anti-ecological rebellion against nature. Dr. Peterson is comfortable in the literary world of Dostoevsky and Nietzsche, and conversant with clinical studies on addiction, attentiveness, memory, sensory screening, and status signaling. He stiffened his spine and took his place as a teacher of meaning in a world of sexual anarchy and intellectual chaos.  He has a profound almost metaphysical understanding that men are called to be heroes in the struggle for order in a chaotic world.  Finally, a psychologist who believes in the soul and its larger end!

Here is a profile and a few interesting interviews. Start at 53 minutes to discuss his new book entitled 12 Rules for Life: An Antidote to Chaos. (Here is AOA review of book).  Feminist bad girl Camille Paglia and Peterson mostly agree on postmodernism. Joe Rogan with Professor Peterson: long radio interview with an irreverent male. Their language is offensively obscene, but Peterson and Rogan reach young males that Christian professors have forgotten.

Professor Peterson surprisingly is quite careless with the name of God and Jesus Christ. He does not yet understand how liturgical worship is the fundamental act of "taking one's place in the dominance hierarchy.'  One rule in the Jewish formulation of the hierarchical order is "Thou shalt not take the name of the Lord thy G-d in vain." The Christians say it this way: "At the Name of Jesus, every head shall bow and every knee shall bend to proclaim that Jesus Christ is Lord." Indeed long before the good professor was defending the proper use of pronouns, serious Christians knew that an assault on the male pronoun as an inclusive representative of all people was an assault on Christ's role as the new Adam -- the representational man for all of humanity.

I think we can be quite hopeful that as Dr. Peterson comes to understand the Christian narrative he will take his place as a worshiping actor in the Drama. Understanding Mircea Eliade and Rudolph Otto on the nature of religion, and reading Phillip Rief on the relationship of prohibitions to sacredness would be helpful next steps. (Peterson, Jung and Freud--good essay)

The universe is a dangerous place indeed: violent, dangerous, dissipating and full of suffering. There is an interpersonal dominance hierarchy that preceded this law-abiding, but treacherous physical universe. It is the Trinity. Human beings are allowed a place (our true and ultimate status) within this Trinity incorporated in the interpersonal union of the Body of Christ. There was an angelic creature who rebelled against this structure of reality before the physical world was made. He still seeks the ruin of souls upon this earthly stage of the great narrative. He has been a Liar and a Murderer from the beginning. While the physical universe was created some 14 billion years ago, humans have been here for only a 100,000 to a million years. In the beginning we were in a properly ordered love relationship with our Creator. But our first parents rebelled and humanity was cast asunder. The first son of the fallen couple murdered his younger brother out of envy. A people were elected by God to be a sign for all humanity. From the tree of Israel came their most perfect fruit: the virgin mother. She gave birth to God-made-man.

The alpha male of humanity and the Messiah of the elected people convoked an apostolic fraternity to constitute a new people who would no longer be set aside from the nations but would baptize them in a new Mission. The Christian Church would explain the narrative of the world... and what Good News it is! The patriarchal fraternity was given the power of the Spirit to sacramentally incorporate humanity into Christ's filial act of obedience in the liturgy of the Mass. The Apostolic Church is integrating all of humanity into the Body of Christ to live forever within the three-Personed God, and to evict the Evil One in the final separation. We all have a role and place in this drama. To be in the state of grace is to achieve our proper status by sharing in God's love and life. The Eucharistic Church, Apostolic Priesthood, nations, and marriage are the interlocking dominance hierarchies by which the human person participates in  the interpersonal love of the Trinity. This is true Catholic Sociobiology.

Posted by anthropology of accord at 2:00 PM