"General religion is in fact no religion at all."
(John Henry Newman)

A discussion of Augustine's CITY OF GOD

A 2003 work by Robert Louis Wilken, "The Spirit of Early Christian Thought," has had a deep impact on many people. We decided to use the book's 8th chapter as a framework of discussion with David Pence. 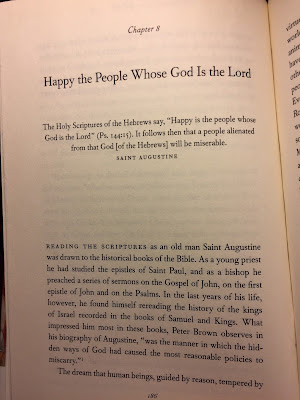 I was glancing recently at the Declaration of Independence. Here is an excerpt from the final paragraph:
"We, therefore, the representatives of the United States of America, in General Congress, assembled, appealing to the Supreme Judge of the world for the rectitude of our intentions...
"And for the support of this declaration, with a firm reliance on the protection of Divine Providence, we mutually pledge to each other our lives, our fortunes and our sacred honor."

Dr. Pence: Our Founding Fathers were noble souls who made their covenant under a Sovereign God. From the Scottish National Covenant of the first Presbyterians (1638), to the Solemn League and Covenant between English and Sottish (1643), to the Mayflower Compact (1620), to the Declaration of Independence (1776), this form of all-male unanimous blood oaths under God was the way Protestant Christians ensured their body politic would be a city of God. The universal rights we quote so often in the second paragraph of the Declaration are insured by the male covenant which comprises the final paragraph. The second paragraph celebrates liberty and equality. The final one explains fraternity.

Their God was the Lord, correct -- or can they be faulted on that score?

The tendency of American leaders to drift off into 'general religion,' to prefer their own gods, came much later in our history. The Founders believed their activities had to be in accordance with the one true God who rules nature and history. He was a God who ruled over nations. He was the Living God of Abraham and Isaac and Jacob. He could be prayed to, and He spoke through the Bible. They often spoke of "true religion" which was Biblical and distinguished from the priest-craft of the papists.

Professor Wilken says that Augustine (354 - 430), unlike Plato, wasn't sketching a pie-in-the-sky city -- but an actual one. A social and religious reality existing in time and space, that worships the one true God.

Yes, Augustine saw that the Church built on God was a living organism and the Roman Empire built on man was going down. In his situation the City of God was the social reality of the Apostolic Church. There were no living nations at that time built on the God of Revelation. Today we are in a very different situation. There are two billion Christians, five continents shaped by Christian evangelization, a hundred Christian nations, and a billion Muslim monotheists trying to shape their political identities. And by the way, Israel has reappeared in the land of Jerusalem. Today's nations are not in the same darkness of ancient Rome. There is a light for the nations. Theocentric social organization is becoming more prevalent, not less.

We are not in a post-Christian era. The atheistic globalist project of the modern West is our crumbling Rome. Like Rome, the West tried to extend its rule and institutions and suicidal individualism apart from the Sovereignty of God. Augustine admired the glory that once was Rome and there is much we can fondly recall of the West, but the weeping and gnashing of teeth should cease! Communism was the crowning achievement of the Enlightenment and the modern West. That city of man is now disintegrating. Christianity and the nations are alive and well. The City of God lives. As Pope Francis says, "Put away the dour face."

The great saint argued that true peace was marked by order, law, and justice. And that a structured family life "contributes to the ordered harmony concerning authority and obedience obtaining among the citizens."

Augustine's language is always social, not individualistic: we have a mutual fellowship in God. As Wilken puts it: "Augustine's controlling metaphor for the new life that God creates is not, for example, being born again, but becoming part of a city and entering into its communal life." The family, the city, the nation and the Church are all hierarchical communal forms of life which are perfected when founded on the spiritual foundation of God. The speech that John Kennedy never gave that evening in Dallas [November 1963] was to remind us: "Unless the Lord builds the house, the laborers build in vain." He was talking about our nation. 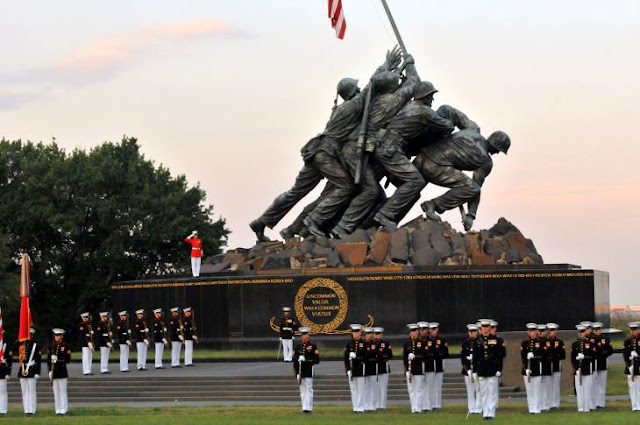 Augustine contends that peace among nations is always going to be fragile and unstable.

That realistic sensibility seems quite at odds with today's ethos.

The bishop of Hippo insisted that good men cannot withdraw from their public duties. Worries about getting our hands "dirty," or whether we have the wisdom and insight for making life-and-death decisions, are not grounds for shirking responsibility.

I think most of our 20th-century presidents saw their protective duties in this light. The more they made life and death decisions, the more they saw their office in terms of religious duty and Divine Providence. I would say that was especially true of FDR, Harry Truman, Woodrow Wilson, and John Kennedy. There are too many Christian intellectuals today who see all of these men as failed Christians, not measuring up to the character perfection attained in faculty lounges or conservative think-tanks.

Augustine had a friend who was an army general in north Africa, who started thinking about retiring to a monastery upon the death of his wife. The bishop urged him to stay at his post on the frontier; that defending the public safety was his top duty.

A culture of life is a culture of protection. The pro-life movement has been too centered on "the right to life" of embryos and even stem cells. This is not the best religious political formulation. A religious culture of life treats life as a sacred gift from God—not a right. We build our social system to protect the gift. The culture of protection is a sexually ordered culture based on gender identity and duty. For men that means soldiers, policemen, brotherhoods, and fatherhood. For women it means motherhood. We must quit treating women who have abortions as victims. We must treat them as serious moral agents in a corrupted society. They are failed protectors and, with Augustine, we must urge them to return to their posts.

As the percentage of Christians in the Roman Empire kept climbing (more than half the population at the time of Augustine's birth), the Church realized the huge stake it had "in the rule of law, in stability, in order, and in civic concord." Augustine knew that these goods are not possible without coercion. When was the last time you heard a bishop say good things about coercion?

This is the great deficit in the Christian personalities of the modern West. We got used to living with abominations that should call forth anger and coercive suppression. So the Christian personality became identified with  niceness -- the Charmin man -- soft and white. The civic personalities who emerge ready to act with coercion in this environment may not come from deeply churched backgrounds. I think of the president of the Philippines who is violently cleaning up the drug cartels there, as well as fighting the salafist Muslims. What he got from his Catholic upbringing was a priest who abused him and fellow clergy who looked the other way. He believes in punishing evil. Men like him will have their faults. Their shortcomings will be magnified by a dishonest media, and thin-chested Christians will be recruited by liars and murderers to disqualify the sinful warrior who emerges to challenge Deceit and Murder. There is no community without authority, and no authority without the willingness to exercise force. You need Mother Teresa and you need a pope who has put away the sword -- but you also need the Christian kings and knights. Or else, the virgin mothers will be ravaged by the evil ones who will never let them feed and nurse the poor.

The earthly city is our imperfect temporary home -- but as long as it allows Christians to honor and venerate the one true God, the modus vivendi retains enough vibrancy to endure.

Amen! Civic concord is an essential form of brotherly love. There has been a huge deficit in Church teaching in recognizing the personalist communio of fraternity at the heart of the male movements for nationalism, citizenship, and what was called "manhood suffrage."

Augustine stressed that justice is not only between men, but must include the justice and worship due God -- the God of the Bible, the very opposite of a private deity. "A commonwealth that does not serve God cannot be a genuine republic... Justice can be found only where God is worshiped."

There must be a transcendent understanding of man as a spiritual being in order to sustain the nation as a spiritual organism. The thread that links citizens in a covenant must be tethered to the Father of all nations: the Lord and Giver of Life. The group tied only to itself (no matter how tightly bound in its self-referential clasp) will eventually be destroyed. "Unless the Lord build the city..."

Professor Wilken paraphrases the bishop: "If men have no sense of God, they have no sense of themselves... For virtue is not simply a matter of behaving in a certain way; it has to do with attitudes and sentiments as well as deeds, with loves as well as with duties and obligations."

In 1818 John Adams wrote: "But what do we mean by the American Revolution? Do we mean the American war? The Revolution was effected before the war commenced. The Revolution was in the minds and hearts of the people; a change in their religious sentiments of their duties and obligations." Matthew Holland's book, Bonds of Affection (2007), is a compelling argument that the American Covenant is based on two loves: love of God and love of neighbor as expressed in civic charity.

The City of God argues that "it is life outside the Christian community which fails to be truly public, authentically political. The opposition is not between public and private, church and world, but between political virtue and political vice."

In the end, a society with no place for God will be enveloped in darkness. Our nation must be under God. Separation of Church and State does not mean that the nation can be a community without God. If we try to build a nation without God, it will be a city of men and it will perish. Men are meant to be brothers under God, and nations are the territorial expressions of that religious brotherhood. Public life, political life perfects man’s nature. Theocentric citizenship is the attentive protective formation in which men await the coming of the Lord. Except for worship, there seems no human activity as central as politics to mankind's spiritual destiny.

Augustine emphasized the importance of the angels to us on our pilgrimage to the New Jerusalem: "With us [the angels] make one city of God... They help us on our way."

The great gift that religious men can bring society is a glimpse, however fleeting, of the invisible realities missed so often in the sensory barrage of modernity. Reality is dominated by the interpersonal union of the triune God, but another invisible spiritual reality are those beings we know as angels. There is a long Christian tradition, not only of guardian angels, but protective angels of corporate bodies, especially of each nation. Spiritual intuition and sight is attentive to these powerful spiritual beings. And, of course, the great Liar and Murderer -- the destroyer of brotherhood and nations -- is an angel himself.

UPDATE: Here is a reading plan for those who have unsuccessfully butted heads with the Bishop of Hippo's magnum opus.

"Jesus Christ is not valued at all until He is valued above all."
(Saint Augustine)