Pope Francis teaches that one of the costumes of Satan is "an angel of light." He advises that when faced with an evil which poses as a social good, it is usually best to give the angel lots of room and rope. The depth of its depravity shows itself best when overconfidence leads to self-exposure.

Saturday night, April 28, President Trump was in Washington County, Michigan with a few thousand working people, and thus the annual White House Correspondents Dinner was given a big room and a lot of rope to celebrate freedom of speech and "speaking truth to power." They exposed themselves.

An award for "investigative journalism" was given to four CNN reporters for their "breaking news" Jan 10 report that President Obama and President-elect Trump had been briefed by the intelligence community "that Russia had compromising information about Trump." This "investigative reporting" was CNN publishing a leak about this meeting from a still unnamed anti-Trump government official. According to his memos, Mr. Comey gave that Jan 6 briefing to President Trump at the suggestion of Office of National Intelligence Chief James Clapper. Clapper, as well as John Brennan of the CIA, were at the briefing. CNN had the "Russian dossier" in early January. They wanted to publicize it but needed a "News Hook" by which it would seem a news story, instead of serving as a televised megaphone for opposition gossip. The Comey briefing became the CNN news story on Jan 10. Other outlets then published the details of the dossier. The WHCA awards gushed "thanks to this CNN investigation 'the dossier' is now part of the lexicon. The depth of reporting... showed breaking news reporting at its best." James Clapper, who suggested the Comey briefing, now works for CNN as a consultant. The real news story is the collusion of anti Donald Trump government officials and anti Donald Trump news media turning fabrications of Russian held prostitute videos into a news story and then a national security crisis requiring a special prosecutor. Most importantly this has poisoned a signature initiative of the Trump Presidency to reformulate relations with Russia in the post Cold War environment of competing nations and civilizations.  The two year resistance movement of high ranking intelligence officials hampering effective governance and a new foreign policy by election winner and outsider Donald Trump is an amazing story crying out for investigative journalists. Maybe next year whoever tells it will win an award.

If CNN's role in manufacturing news can win a medal for investigative journalism, then the angel of light fully disclosed herself in Michelle Wolf's monologue posing as the evening's entertainment. If the essence of femininity is purity and interiority, then the anti Mary is raunchiness and self exposure. If the protective nature of woman is motherhood then the anti Mary is "On abortion, don't knock it, till you try it and when you do try it, really knock it..(makes elbow gesture) you know you gotta get that baby out of there."  Her non-stop pornography laced skit reminds us why for two centuries American free speech protection did not cover obscenity, flag burning, or taking God's name in vain. Under a modernist cover of free speech, the category of the sacred has been bleached from existence. On that unhappy night of self exposure,  nothing was left unspoken or  "out of  sight"-- the real root of the word obscene. The traditional spirit of obscenity laws was a set of protective customs keeping certain dimensions of human life as sacred and private -- a dimension meant to be hidden. It is true that some things are kept out of sight because they are "dirty" but other things are kept out of sight because they are sacred. This notion is a dimension often associated with feminine beauty --with a hat or a veil-- with a gown that reflects beauty but doesn't disclose her. None of those truths made it to the Saturday night massacre of feminine purity and journalistic integrity.

It was a bad night for women and a bad night for journalism. It was a night in which the demonic angel of light revealed herself. She did not come looking like an old crone and she gave evidence of a resilient intelligence. She smiled as she described the ultimate act of domestic violence: the infanticide of abortion. She dismissed the protective male as a man trying to get close enough to get a feel. They laughed when she spoke of castration and rape and tragic deaths.

The next day, "conservative" media had its own peculiar but telling reaction. Because they cannot summon the transcendence of religious foundations or the clarity of masculine thought, most complained that the comic was viciously anti Trump or she was a bully for making fun of Sarah Huckabee Sanders' looks. Watch the evening without your feminist implant. Retire your position from the bully patrol. Watch with the heart of a father or mother. This group's sin was not disrespecting Donald Trump. They struck at deeper foundations. They transgressed the sacred sexual boundaries of public and private order. The dressed up media all together in living color with their chosen mouthpiece are a dangerous lot. They control the non stop imagery shaping our culture's narrative. They inject their chaos in our children's brain patterns. To accuse them of making fun of Sarah Sanders' makeup was like watching a mass murder and then complaining that the killer didn't wear his seat belt in the getaway car.

Something very ugly happened on a Saturday night at the end of April in Washington DC. The President was wise to be in Washington, Michigan. A day of reckoning is approaching. That demonic angel of light was left out on her own with no big daddy to rail against. She exposed herself.  Like all the ancient witches she is a danger to the lives of  little children and the innocence of young virgins. May a renewed national brotherhood of fathers under God soon end her reign. 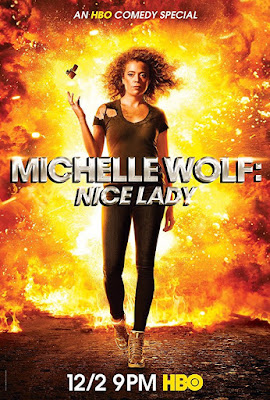 Posted by anthropology of accord at 8:00 AM